Indigenous knowledge at the White House: Haaland outlined the Interior’s work since she took office 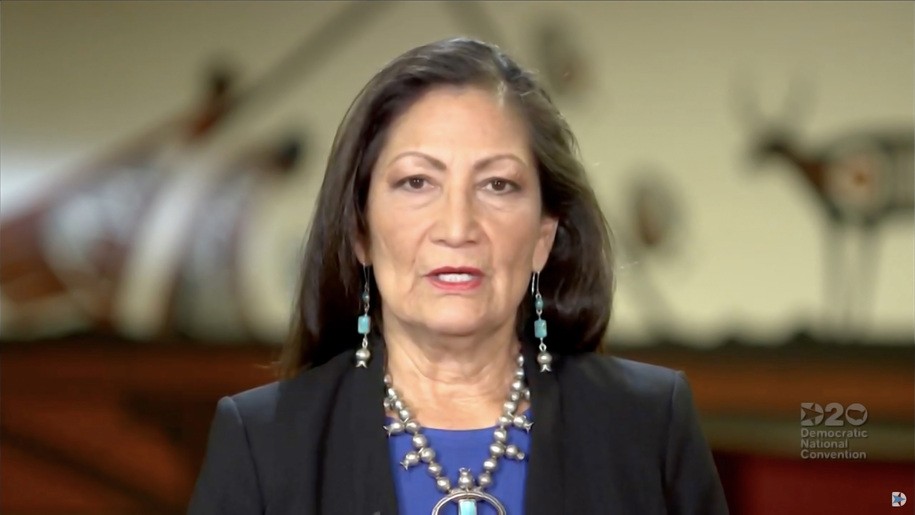 Interior Secretary Deb Haaland said at her first White House press briefing, “how monumental this week has been for Indigenous representation.” She was the latest Cabinet member to take questions from reporters on Day Two of President Joe Biden’s climate summit.

There are so many firsts associated with Haaland’s appointment. She is most likely the first Native American to brief the national press corps from the White House podium.

Besides answering questions from three reporters, she also outlined the work Interior has completed in recent days and addressed the need to strengthen tribal sovereignty.

Many of Haaland’s updates revolved around national parks, given the commemoration of National Park week this week.

Haaland, Laguna Pueblo, outlined a Friday morning announcement of 16 new additions to the National Park Service’s Underground Railroad Network to Freedom, a program that preserves and promotes the history of sites that served as shelters to enslaved African Americans hoping to gain their freedom. The 16 new sites join nearly 700 others in states such as Arkansas, Maryland, Michigan and others.

“Our park system is our nation’s storyteller,” Haaland said. “And I’m eager to ensure that these national treasures help tell a more inclusive and accurate story of our nation.”

Haaland joked, “I had always wanted to be a national park ranger and while I didn’t quite land that job yet, I’m pretty excited that tomorrow night I get the chance to swear in some Junior rangers.”

The interior secretary said her agency has taken steps to advance offshore wind proposals in recent weeks in an effort to meet President Biden’s goal to tackle the climate crisis by leading a “clean energy revolution.”

On Monday, Haaland delivered remarks at the United Nations Permanent Forum on Indigenous issues where she acknowledged the importance of Indigenous knowledge ways.

“With Indigenous knowledge, the world can usher in a new era of peace, justice and strong institutions to meet this moment and move our planet toward a more sustainable future,” Haaland said in recorded remarks.

After Friday’s press briefing, Haaland said she would be convening the first meeting of the White House Council on Native Affairs in the Biden administration with domestic policy advisor Susan Rice.

Sec. Haaland is asked why national parks are operating at reduced capacity while people are visiting and social distancing outside. Haaland: “We are taking every possible precaution to make sure that we are keeping people safe. I don’t ever want to jump the gun on this.”

Before exiting, Haaland addressed a question on the current moratorium on oil and gas leases on federal lands and waters. She said the pause on new leases will be in effect until a review is concluded by the Interior department. After the review is concluded, it will be presented to the president who will make a decision to decide next steps.

Biden met with Navajo leaders Thursday, followed by a tour of a boarding school and nearby hospital on Friday, before returning to Washington.

Aliyah Chavez is from Kewa Pueblo and works as a reporter-producer at Indian Country Today. Follow her on Twitter: @aliyahjchavez or email her at achavez@indiancountrytoday.com