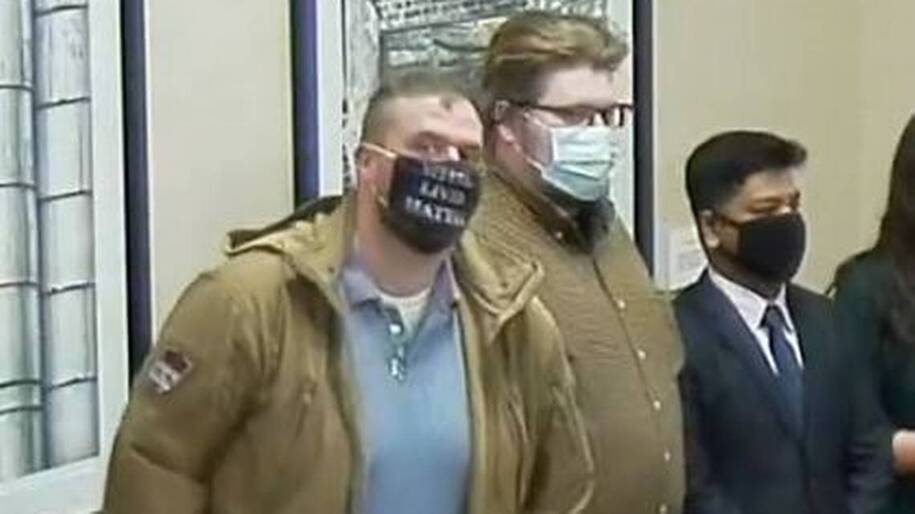 A college student in Kansas who once made headlines for threatening local police officials who “got in his way” has now been appointed as part of Wichita State University’s student government. But his threatening to shoot police officials is not the only problematic thing giving him attention. The student—identified as Sam McCrory—chose to wear a “white lives matter” face mask to his first student government event Thursday.

McCrory was sworn into office while wearing the mask just one day after former Minneapolis police officer Derek Chauvin was convicted of the murder of George Floyd, The Wichita Eagle reported. When asked about the mask, McCrory expressed no regrets, noting that he wore the mask to push back against those who hate white people. “I’m not going to be a second-class citizen in my own country,” he said. “People can wear Black Lives Matter masks and nobody cares. But if someone wears a white lives matter mask, all of a sudden there’s a huge firestorm.”

According to The Wichita Eagle, despite him wearing the mask to the event and being sworn in with it, the mask went unnoticed by the Student Government Association until the university’s student paper, The Sunflower, posted photographs of the ceremony on social media. Students and others then called for the university to remove McCrory from his position as university student senator.

“Those pictures were posted the same week George Floyd’s murderer was (convicted) and after WSU released a statement talking about inclusiveness on campus and embracing diversity,” said Hannah Newby, a 23-year-old WSU student. “It was a horrible statement to begin with that just danced around police brutality and Black Lives Matter in general.” Newby called out university leadership for not condemning the mask and taking a strong stance against police brutality and racism.

“The fact that I got on to social media yesterday and saw my university posting students sporting white nationalist propaganda was disappointing and embarrassing to say the least,” Newby said. “I think having differing opinions within the SGA is different than allowing outright racists to take a seat with SGA.”

According to The Wichita Eagle, following the Chauvin trial WSU issued the following statement, saying universities have an obligation to be “safe harbors for diversity of thought and life, but also to be catalysts of positive change in all respects – knowledge, research, economics and culture. One of our distinctive university values is to be an institution of inclusive excellence: to be a campus that reflects and promotes – in all community members – the evolving diversity of society.”

Newby wasn’t the only student who shared their disappointment with the university.

“No person with a ‘white lives matter’ mask should have a place in SGA,” WSU Intersectional Student Leftists Association, a WSU student group, posted on Twitter. “Absolutely unacceptable.”

According to The Wichita Eagle, while school officials would not return calls or comments on who the student was, The Sunflower identified the senator as McCrory, which was later confirmed by McCrory himself to the outlet.

Outside of his choice of attire, what is troubling is a student like McCrory would represent other students of a university. McCrory has not only threatened cops in the past but has been arrested and pleaded guilty to felony crimes. According to The Wichita Eagle, McCrory posted plans to storm the Sedgwick County Courthouse in 2015 in attempts to disrupt a murder trial. He not only threatened to shoot officers who got in his way, he also threatened the judge of the case.

“If we get a decent number of people to charge through the front doors and security, the police there will attack us. Often times, the only way to defend yourself from a cop is to kill the cop which means using a rifle to penetrate their body armor,” he posted on Facebook. Court records indicate he was sentenced to 34 months probation and an anger management course in 2015. He was also convicted of criminal possession of a firearm for showing up to protests with guns, despite his criminal record forbidding him from doing so.

In response to people calling the mask racist, McCrory defended himself, claiming it wasn’t. “Do I think I’m racist? I think that the word has no meaning at this point. I reject the moral construct behind it.”

Wearing racist masks amid the pandemic is not a new trend. With mask mandates in place across the country, individuals have been wearing masks displaying racist slogans and symbols nationwide. In one incident, a couple wore masks with swastikas on them to protest Minnesota’s state mask mandate, Daily Kos reported. Such symbols are not okay and should not be tolerated wherever they are worn, especially in a school setting for those considered to be leaders.