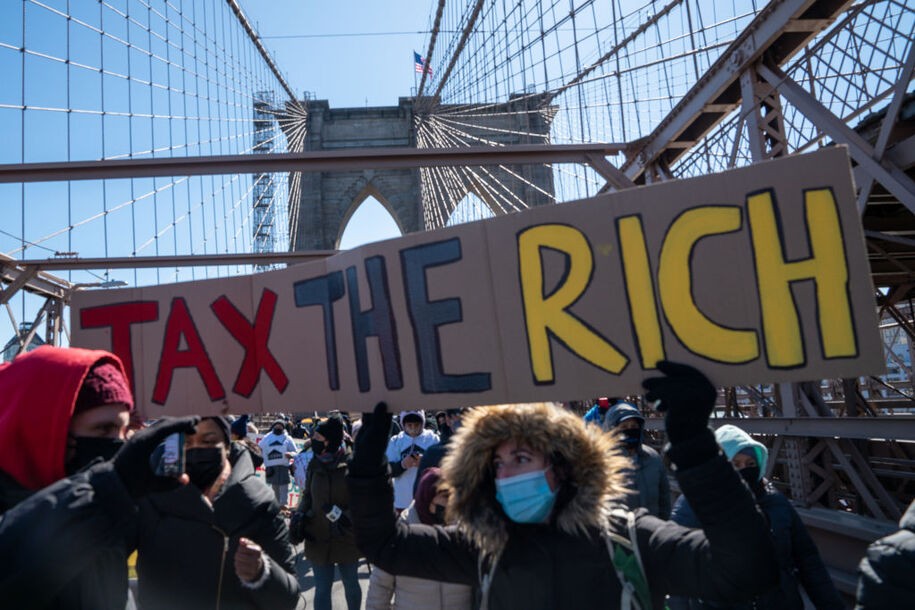 New York recently passed a historic $2.1 billion fund for workers who were excluded from previous federal and state coronavirus aid. Roughly 300,000 New Yorkers—including undocumented community members and people with “nontraditional” jobs—stand to benefit from the additional aid. The fund is the result of a three weeks-long hunger strike led by immigrant workers and supporters who have been struggling since the onset of the pandemic.

Colombian immigrant Rubi Correa was among those who endured starvation-triggered stomach pains and exhaustion to lend their strength to the strike’s demands for worker relief. Before the pandemic, Correa worked as a house cleaner and caregiver. She was fired when her employers feared she’d contract the coronavirus while commuting on public transit.

“The hunger strike made me forget about moments of suffering and it helped me feel useful,” Correa said.

For Ecuadorian Felipe Idrovo, the hunger began in March 2020 when many workers lost their jobs and began losing loved ones. Idrovo, who is a survivor of COVID-19, lost both his brother and father to the virus. After he was discharged from the hospital, he was evicted from his apartment in Queens.

“This struggle isn’t just about us,” he said at the April 7 press conference after the fund’s passage. That day, the hunger strikers shared their first meal in weeks together in Washington Square Park.

Bianca Guerrero, the employment justice campaign coordinator at Make the Road New York, admires the bravery of the protesters who put their bodies and health on the line in the midst of the pandemic to achieve their goal. Like Correa and Idrovo, many of the protesters had survived depression, domestic violence, homelessness, hunger, and health conditions that put them at risk by participating in the rallies. Guerrero pointed to their actions being necessary as a consequence of the state’s failure to take care of undocumented and nontraditional workers.

“These workers have paid into this system, and this money is only a fragment of what other New Yorkers have received,” said Guerrero. “Most of the people on strike were immigrant women. I really hope that doesn’t get lost in this. It really demonstrated tremendous leadership.”

The fund operates on a “two-tier system” brokered by some lawmakers and New York Gov. Andrew Cuomo. It requires undocumented people to prove they lost their job due to the pandemic and to present an Individual Tax Identification Number used by undocumented people to pay federal taxes. With this two-tier system, some people will get up to $15,600 in aid, and others up to $3,200—relief meant to mirror unemployment and stimulus checks.

Unfortunately, despite advocates’ best efforts, formerly incarcerated people were once again robbed of aid by being left out of the fund. The Fund Excluded Workers Coalition had originally demanded a $3.5 billion fund that included relief for formerly incarcerated workers, but the coalition ran into pushback from the governor’s office and conservative legislators. As Nadia Marin-Molina, co-executive director of the National Day Laborer Organizing Network (NDLON) noted, the inclusion of formerly incarcerated people among those who qualify to apply for the funds was a passionately held position by many.

“It was crucial to remind people that workers in prisons were making and packaging the hand sanitizers that New York state residents were relying on in the beginning of the pandemic,” Marin-Molina said.

The fund was supported by progressive state officials like Assemblymember Carmen De La Rosa, who was brought to the U.S. from the Dominican Republican by her adoptive family when she was a baby; Assemblymember Marcela Mitaynes, an immigrant from Perú who joined the hunger strike for 12 days; and Sen. Jessica Ramos, the daughter of Colombian immigrants and a years-long advocate for immigrant and workers’ justice.

While advocates are relieved at the fund’s passage, the date when applications will start being accepted still hasn’t been announced. Further, qualifying for the highest amounts depends on applicants’ ability to gather the lengthy list of documents proving their identity, residency in the state, and tax returns. Local advocates and members of the Fund Excluded Workers Coalition—made up of New York grassroots organizations such as Make the Road New York, NDLON, New York Communities for Change, and the Street Vendor Project—are leading a multilingual education campaign to inform people of the fund and help applicants gather all necessary paperwork.

A considerable amount of effort and planning went into making the fund’s conception and execution possible. Zack Lerner, organizing director with New York Communities for Change, noted how the hunger strike was a culmination of a year of organizing and solidarity, meeting with lawmakers, shutting down bridges, and protesting outside the mansions of New York billionaires in the Hamptons and other wealthy areas. Advocates are now turning their efforts to getting the fund implemented quickly because the people who need that relief and aid have waited and fought for long enough.

“I have been a part of many state campaigns, campaigns around the budget, housing and other things, but this was probably one of the best campaigns and coalitions that I have been a part of in my years of organizing,” Lerner said. “We had trust built across all of these organizations across the state. It was just this magical moment where we were all in this fight together. We were gonna win and we were gonna do whatever it took.”

Notably, a successful fight to increase taxes on the extremely wealthy also happened parallel to the fund’s passage. New York’s $212 billion budget raised taxes on the state’s wealthiest people as well as corporations, which helped make the fund’s acceptance in the state legislature more possible.

“The state wasn’t able to say, ‘There’s no money,’” Marin-Molina said. “We can always point to Jeff Bezos making $13 billion in one day during the pandemic. It was an important argument to be able to change the way you’re looking at the state budget. This is also not the end … It is one victory and we hope that we can build on it.”

Others are taking their opportunity to build on the hunger strikers’ success. Workers in Iowa are now demanding a $20 million fund to provide relief to undocumented people, previously incarcerated people, and other excluded workers. Next door in New Jersey, the day the Fund Excluded Workers coalition announced their victory in New York, immigrant workers started their own hunger strike with the hope of pressuring state officials to provide relief to undocumented people and others excluded from pandemic aid. Hunger strikers from New York met with community members in New Jersey as they were considering the hunger strike.

“With the support and the energy and inspiration of what was happening in New York, folks in New Jersey started to think about what that could look like here and thus was born this wonderful, powerful, exhausting fast,” said Nedia Morsy, organizing director of Make the Road New Jersey.

Like their counterparts in New York, the New Jersey strikers are also dealing with pandemic fatigue and economic insecurity enabled by government neglect and the lack of respect for workers. Their hunger strike is a way of proclaiming their resilience and power, as well as a refusal to let state and local officials ignore their need for support and relief. When Morsy spoke to Prism, the hunger strike, which she’s also a part of, was in its seventh day.

“Even in all of this chaos, our members are coming to actions, coming to meetings, strategizing, [and] coming into their own power … We are not sacrificial people,” Morsy said. “This hunger strike is testament to the fact that we are going to fight for our lives. It’s been over a year and New Jersey lawmakers have no more time to waste.”

Noemi Ruiz, a single mother from Mexico, was inspired to join the hunger strike in New Jersey by her 8-year-old daughter. Ruiz works at a panaderia and has been able to get by through food donations from local churches. She’s been in the U.S. for two decades and hasn’t stopped working since. She’s struggling with rent, utilities, and medical bills.

“I want to cry. I want to scream. We want officials to hear us. They are responsible for creating solutions for our community,” she said. “This is not charity, it is a humanitarian act. We deserve respect and dignity too.”

María Inés Taracena is a contributing writer covering workers’ rights at Prism. Originally from Guatemala, she’s currently a news producer at Democracy Now! in New York City focusing on Central America and asylum-seekers, among other stories.