‘Rudy, I told you so’: Ex-Trump lawyer Michael Cohen has thoughts about Giuliani’s current situation 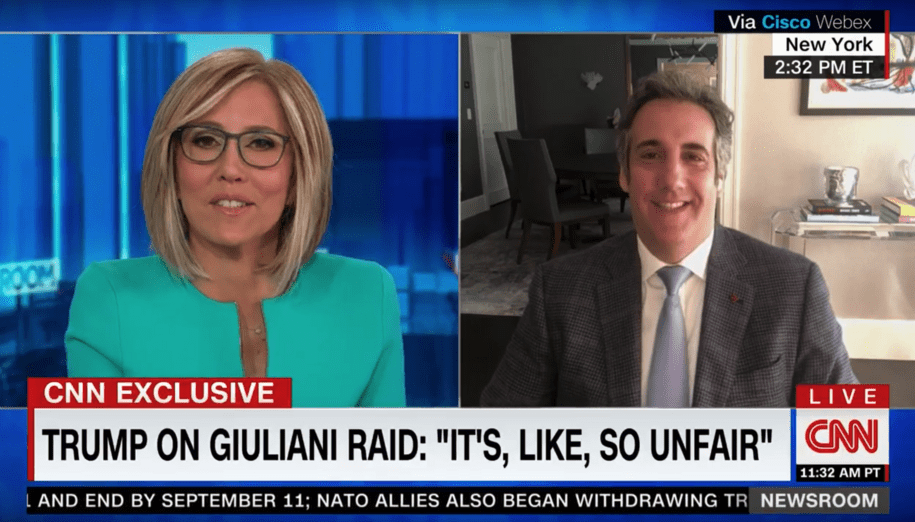 Former personal lawyer to twice impeached Donald Trump, is currently serving a 36-month house arrest sentence for his part in orchestrating a hush money payment to adult film star Stormy Daniels. The payments were done on behalf of Donald Trump and Michael Cohen’s deal with prosecutors to hand over more evidence of Trump’s dubious dealings has always been considered a ticking time bomb.

On Thursday, Cohen did an interview from his home with CNN’s Alisyn Camerota. Cohen was brought on to talk about the news that former New York mayor and leaky hair dye faucet Rudy Giuliani’s Park Avenue apartment had been raided by federal agents as a part of ongoing investigations into Giuliani’s sketchy dealings. The raid mirrored one that Cohen experienced himself in 2018; one that at the time, Giuliani whined was an action only reserved for “organized crime cases.” Good news for Rudy: The circle is almost whole. Cohen began with two things that came to mind after he heard about the raid. He thought, “I’m no longer the only one,” and he remembered his parents telling him not to “gloat.”

The interview only went upwards from there.

Let’s not forget that Cohen has been a scumbag lawyer for a scumbag faux billionaire rich kid for a considerable amount of his professional adult life. However, unlike the rest of what Cohen refers in this interview to as the “garbage can orbit”* around Trump, Cohen is the only one doing some time, and who was scapegoated for the clear crimes done by myriad people.

“Do I think Rudy will give up Donald in a heartbeat? Absolutely.”

With that said, Cohen went on to say he’d told Giuliani “that Donald Trump doesn’t care about anyone or anything. That [Giuliani] will be the next one to be thrown under the bus.” And when Camerota asked whether the FBI would find all kinds of “interesting correspondence” in the cache of digital documents they seized, Cohen gave a very serious assessment of how things were going to go down for old Rudy.

”Who knows what Rudy was involved with? What we’re going to find out is there are text messages, there are emails, there are different types of communication apps that the FBI knows how to re-establish. Even if Rudy, who I don’t think is technological, tried to, you know, tried to delete or what have you. It doesn’t make a difference. and what happens is they may be starting the investigation, looking at things like the Ukrainian conversations between himself, Lev Parnas and others. You may find out Jared Kushner was involved or Don Jr. or a host of other individuals in Trump’s orbit.“

This is what happened with Cohen himself, he goes on to explain, and led to the scope of the investigation broadening. And while Cohen said that of the 14 million or so digital documents seized from during his investigation, he knows that Rudy’s digital trail doesn’t have nearly as many benign family photos as Cohen had. “Rudy’s been shady for a long time, and what you’re going to find is that it’s going to expand the investigation into other areas that Rudy doesn’t even possibly remember, or if he does remember, he certainly didn’t want it released.”

“Rudy drinks too much. Rudy behaves in such an erratic manner that … who knows what’s on those telephones or what’s on his computers?”

This brings us to one of the highlights, as Cohen is clearly enjoying the fact that someone else besides him is getting the good justice treatment. “We have no idea how expansive this investigation is going to ultimately reveal itself, because Rudy’s an idiot. And that’s the problem. Rudy drinks too much. Rudy behaves in such an erratic manner that … who knows what’s on those telephones or what’s on his computers?”

You don’t have to go back far to see evidence that Rudy Giuliani is a tad bit “erratic.” Even Fox News, of all organizations, began distancing from Giuliani in real-time over the last few months.

Asked whether or not Donald Trump had to worry about potential deals Giuliani may be tempted to cut in order to get out from under the bus, Cohen asserted: “You have to understand, there really is no relationship, nor has there ever been, between Rudy and Donald. Prior to Donald becoming president, Rudy didn’t like Donald, and Donald certainly didn’t like Rudy. So, do I think Rudy will give up Donald in a heartbeat? Absolutely.” In Giuliani and Trump’s defense, I don’t think either man likes anyone. In fact, I suspect that they really dislike themselves the most, and always have.

The interview was going so well, CNN’s Camerota told Cohen to stay through the commercial break for round two!

Camerota played Trump’s call-in remarks to right-wing news concerning the Giuliani raid. Trump said a lot of nothing, but mostly about it being unfair; he declared that Giuliani is a “patriot.” Cohen, for his part, had to stop himself from giggling like a 6-year-old who has heard an adult say “butt” for the first time. Cohen basically went on from there to reiterate that Donald and Rudy were in deep doo doo (giggle) and no matter how Trump sounded during the call, he “is not happy about” the raids on Rudy. In fact, Cohen asserted that Donald Trump is scared.

”[Trump] was afraid even when they raided my home and my law office, because Donald Trump cares about only one person, and I say it all the time. He cares about only himself. So, he doesn’t care that they raided Rudy’s home. He doesn’t care that they raided Rudy’s law office. ‘What is it going to do to affect me?’ Is all that he’s thinking right now. ‘What did stupid Rudy do? What did stupid Rudy write? What sort of text messages or emails, what sort of stupid things was Rudy up to that’s now going to implicate me?’”

After talking about how silly it was to hear Rudy Giuliani’s son Andrew claiming that this was all a political witch hunt, and that Andrew was considering running for governor, Camerota asked Cohen about a prediction he made before the election—that we would not have a peaceful transition of power if Trump lost. Saying it was sadly predictable, Cohen explained that the saddest part is that millions of these MAGA-devoted Americans are under the delusion that Donald Trump could be anything but a catastrophically terrible world leader. “He’s the most flawed human being.”

“Look at all of the people. Whether it’s Matt Gaetz or any of these other jokers that just sit there and they keep following Donald Trump, thinking—and this is the big problem when you are associated or in Trump’s orbit—you actually, for that moment, believe that you’re invincible. You sort of take on Trump’s persona and think that you’re Teflon Don. Well, guess what? You’re not.”

He said that the unfortunate flaw among men and women around Trump is that they will continue to follow him, even while it’s clear that Trump will throw any and all of them “under the bus” at a moment’s notice. Cohen says the delusion of invincibility is real amongst those licking Donald’s boots. “You sort of take on Trump’s persona and think that you’re Teflon Don. Well, guess what? You’re not.”

A reminder to anybody who did not live on the east coast when Giuliani was prosecutor and then mayor in New York City: Rudy Giuliani has always been a truly terrible person.