Who won and who lost in congressional reapportionment? Here’s our state-by-state guide 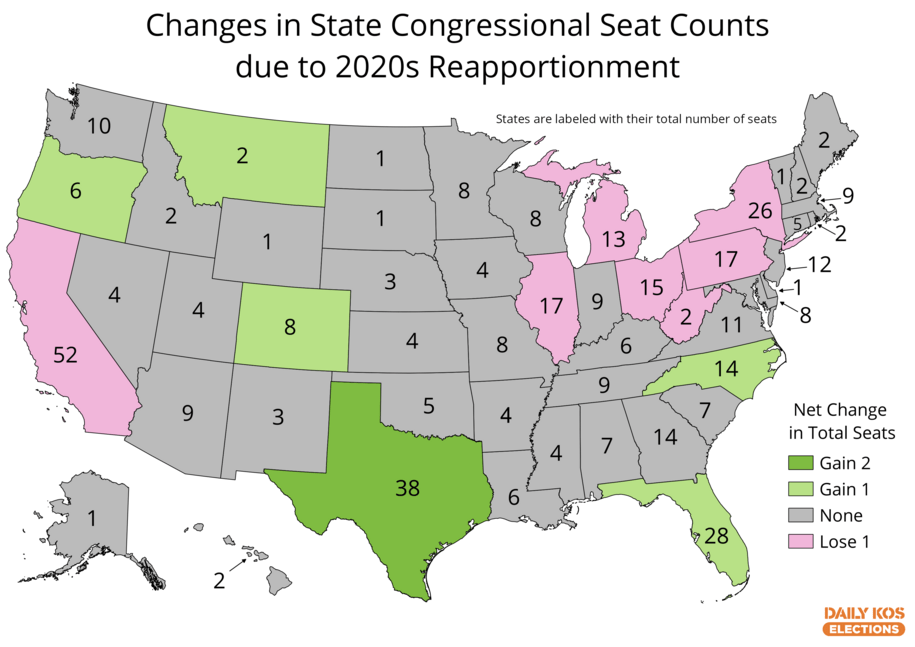 It’s that magical week that comes around just once a decade. On Monday, the U.S. Census Bureau released the breakdown of how congressional seats will be distributed to the 50 states for the next ten years. This affects the next five House elections as well as the Electoral College in 2024 and 2028. I’m going to briefly go over the implications for each state affected as well as touch on four states who narrowly avoided gaining or losing a seat.

Alabama (6R-1D, lines drawn by legislature) Alabama looked likely to lose a seat for most of the decade but estimates from last year predicted it would keep its current seven and it did. The big fight will be in the courts over a second majority Black seat that the state could create but previously hasn’t. If that happened, it would result in a Democratic gain.

Arizona (5D-4R, lines drawn by independent commission) Arizona unexpectedly did not gain a seat, which probably makes significant changes less likely. Republicans have maneuvered to have greater influence on the commission than in 2010, so that could result in a Democratic seat put at risk.

California -1 (42D-11R, lines drawn by independent commission) California lost a seat as expected due to slower growth compared to the rest of the sunbelt due to the state’s housing crisis. The loss will probably come from the Los Angeles area where growth has been slowest, and it’s more likely than not to be a Democrat given the party’s dominance of the congressional delegation.

Florida +1 (16R-11D, lines drawn by legislature with some restrictions) Florida has a Fair Districts Amendment that resulted in the state’s top court unwinding the state’s Republican gerrymander earlier this decade. Unfortunately, the court has become more conservative since then and it’s unclear if it will place any real limits on the Republican legislature. The new seat will almost certainly be Republican, and it wouldn’t surprise me if the legislature didn’t go after an additional Democratic seat as well.

Illinois -1 (13D-5R, lines drawn by legislature) Illinois lost a seat like many of the large midwestern states, and the Democratic legislature will almost certainly eliminate a Republican seat. They will also look to shore up Rep. Underwood’s IL-14 and Rep. Bustos’ IL-17, Democratic held seats that were close in 2020.

Michigan -1 (7D-7R, lines drawn by independent commission) Michigan has a new independent commission so the previous Republican gerrymander will be unwound, but since Democrats won two GOP-leaning seats in 2018 the topline won’t really shift. There’s a good chance that Democrats lose a district in southeastern Michigan but may be able to win a seat that unites the Grand Rapids area that had previously been divided.

Minnesota (4D-4R, lines drawn by legislature) Minnesota unexpectedly saved its eighth seat by a very narrow margin and so will avoid any nasty incumbent on incumbent fights. Not much will change since the courts will draw the maps with the legislature under divided control.

Montana +1 (1R, lines drawn by independent commission) Having lost its second seat in 1990, Montana has returned to the land of drawing congressional districts. It has an independent commission so the expectation is that there will be a very Republican district covering the right-half of the state and a competitive but Republican-leaning district covering the left-half of the state.

New York -1 (19D-8R, lines drawn by independent commission unless 2/3rds of legislature overrides) Instead of losing two seats as expected, New York only lost one seat and nearly didn’t lose any. A new commission is supposed to draw the lines, but the legislature can override it with a two-thirds majority, which Democrats achieved in 2020. Assuming legislative Democrats take control of the process they will eliminate at least one Republican seat and could go after additional seats.

North Carolina +1 (8R-5D, lines drawn by legislature with no gubernatorial involvement) North Carolina’s new seat will likely be put in the Charlotte suburbs and rumor is that House Speaker Tim Moore will set it up for himself. Reportedly, the GOP will also go after Rep. Kathy Manning’s Triad-based district, but the state’s supreme court will likely block that.

Ohio -1 (12D-4R, lines drawn by legislature with some restrictions) Ohio has complicated new rules for restricting that are supposed to encourage bipartisan redistricting but allows the Republican legislature to push through a map of their own if they really want. It’s likely that Democrat Tim Ryan’s 13th District will be eliminated (hence him finally taking the plunge for Senate). The main question is whether Republicans will try to maintain its iffy Cincinnati gerrymander which splits they city in two or create a Democratic vote sink like they did for Columbus a decade ago.

Oregon +1 (4D-1R, lines drawn by legislature) Normally a Democratic state with a Democratic legislature gaining a seat would be good news but it likely won’t work out that way in Oregon. The state isn’t really set up to maintain a stable 5D-1R map, divided as it is between very liberal and very conservative areas. Plus, Democrats in the legislature agreed to work with Republicans on congressional redistricting in return for less obstruction otherwise, so this map will probably end up 4D-2R.

Pennsylvania -1 (9D-9R, lines drawn by legislature) Pennsylvania’s Supreme Court implemented a new, fairer map for 2018 and with the GOP controlling the legislature and a Democratic governor, they will likely draw the maps again. The eliminated seat will probably be a rural Republican one, but the resulting shifts could further endanger Democratic Rep. Matt Cartwright’s 8th District, which voted for Trump in 2020.

Rhode Island (2D, lines drawn by legislature) Reps. Cicilline and Langevin have spent years anticipating an incumbent-on-incumbent primary battle and then Rhode Island unexpectedly kept its second seat. That battle royal has been avoided for at least another decade.

Texas +2 (23R-13D, lines drawn by legislature) Texas gained two seats instead of the expected three and the legislature should be able to make both safely Republican. Democrats won TX-7 and TX-32 in 2018 despite both having been drawn for Republicans, so the legislature now has the flexibility to make those two seats new Democratic vote sinks. They could also eliminate a South Texas Democratic seat and create a new Austin-based seat to create another Democratic vote sink.

West Virginia -1 (3R, lines drawn by legislature) Due to the slowest growth in the nation (a net loss of population in fact) West Virginia was always going to lose a seat. Due to Republican dominance, one GOP representative will find themselves without a seat when the music stops.

Taken all together, these changes will probably result in a small net benefit to Republicans. However, this doesn’t consider other states where the number of districts won’t change but the lines will, such as Georgia and Virginia. We’ll know more once the full data is released later this year and maps start getting drafted and signed into law.