Proud Boys mark their public return with a threatening Oregon rally, and no police presence 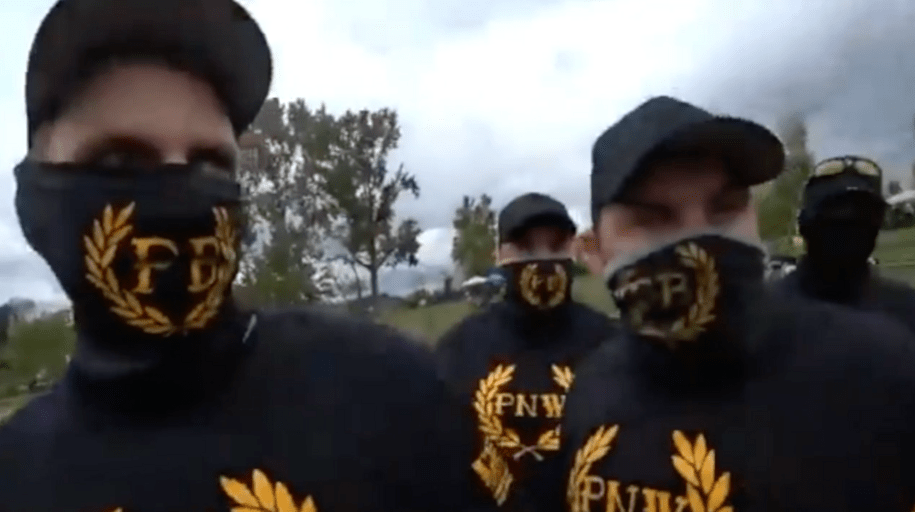 When the Proud Boys and their far-right cohorts led the violent Jan. 6 insurrection at the U.S. Capitol, they did so largely operating under their longstanding belief that the police were on their side. This weekend, breaking their weeks of quiet amid a stream of post-Jan. 6 arrests, they held an armed “Second Amendment” rally in Salem, Oregon—without a whiff of police presence.

That meant that the Proud Boys, acting as gun-bearing “security” for the “One Nation, One God” rally on Saturday at Salem’s Riverfront Park—an event that had no permit from the city—were able to close off access to anyone deemed undesirable, threatening both journalists and citizens with impunity. The only sign of law enforcement was a police helicopter hovering overhead.

Journalist Tim Gruver of The CenterSquare Oregon was threatened by Proud Boys and refused entrance to cover the event. “Riverfront is a public park,” Gruver noted on Twitter. “Families are gathered right next door.”

A videographer who uses the nom de plume “Behind Enemy Lines” was also escorted out of the event by Proud Boys. “OK, gotta get you outta here,” a masked Proud Boy can be seen telling him on video he published. “Roll it up.” As he leaves, they make it clear that they believe he “doxxed” (revealed the identity of) a Proud Boy at a previous event.

Promoted online as a “May Day 2A Rally,” the event drew 100-200 attendees, according to reporters. They were observed carrying semi-automatic pistols or rifles. And despite the lack of any authority to do so, they “closed” the public park to media and forced out anyone they believed didn’t belong, including at least one elderly man who was just walking through the park.

Oregon Proud Boys have deep connections to the Jan. 6 insurrection, including two brothers who were arrested for their roles in the Capitol siege. Moreover, their participation in the invasion of the Oregon State Capitol in Salem on Dec. 21 was in many ways a powerful precursor of the Jan. 6 event, especially in terms of the far right’s antidemocratic strategies.

The leading scheduled speaker for the event was Rep. Mike Nearman, the Dalles-based state House member who was seen on video opening a door to allow insurrectionists into the building on Dec. 21. Nearman has been charged with two misdemeanors—official misconduct in the first degree and criminal trespass in the second degree—for that act.

However, Nearman was a no-show. Instead, the best-known speaker Saturday was Jo Rae Perkins, the QAnon-loving Republican nominee for Oregon’s U.S. Senate seat in 2020. Perkins called COVID-19 vaccines a “bioweapon,” repeated false “stolen election” claims, and claimed the state is “going after your children.”

A number of Salem residents remarked on the threatening and bullying behavior and the absence of a police presence on social media. “The Proud Boys are basically illegally taking over Riverfront park for the day and are forcefully ejecting people they don’t like,” tweeted one citizen. “They have weapons. Salem PD are doing nothing and have blocked me, a Salem resident, on this platform. This is not ok.”

One elderly man posted a description of the scene on Facebook:

Just took a stroll through our Riverfront Park which Republicans and other fascists had commandeered for their meeting. A large number of men, mostly with sidearms, in Proud Boys uniforms, mainly military belts and camouflage, and also American flags and Trump paraphernalia.

The most noticeable aspect, which was my main reason for checking this out, was that there was absolutely no Salem Police present. Not only in the Park itself but also on the periphery, along Front Street. Not a one.

As I ambled through the venue I was accosted by a woman who demanded to know why I had a mask on. Then she demanded that I not take photos, and then insisted that I tell her my name. Turns out she was one of the “organizers”.

After that I sat in the amphitheater area and listened to speakers, mostly Republicans. The atmosphere of hatred and blind, ignorant fury was unbelievable.

I was going to stay until Representative Nearman gave his speech but before we got to that part of the program four heavily armed and uniformed Proud boys sat down next to me and said they were going to escort me out of there, saying the “organizers” didn’t want me there.

I naturally complied and as we were walking out I asked the one who seemed to be their spokesman what would happen if I didn’t agree to leave as told, would they forcibly evict me. He said we could do it either way it was up to me.

Most of us, quite understandably, don’t want to stay up at night worrying about these characters but at least believe that they have a serious agenda that involves violence and attacks on our governmental institutions. And the police will not be on our side.

Another Salem resident posted about his experience on Reddit:

I was walking past the fisherman statue towards the carousel with one of the kids I support when we saw a group of them walking by, so we cut through the grass towards the front of the carousel. I snapped a picture to post to snapchat and they started following me, yelling “give me that phone fucker.” They started getting closer so we started hurrying to the gates. I had to stop when I got separated from the kid I support. They started shoving me telling me that I needed to go. One grabbed a hold of me so I tried to stabilize myself and one of them held me while a couple others started swinging at me. It felt like four or five were there but it was more likely only two or three of them involved in the scuffle. They smacked me in the head a couple times and got my ribs and back before throwing me on the ground. They wouldn’t let me go back to the kid I support while she was still in the park so I had to walk along the train tracks and she had to follow me on the opposite side of the fence. She was being followed by somebody wearing a ballistic vest and holding a pistol at their side. We ended up back together at the parking lot by the gilbert house and they stopped following her.

The same man commented later that police did come to his home for a statement:

Police came by the house I’m working at and asked me questions. Dude spent the entire time basically trying to ask whether or not I was agitating them. Officer said “It’s not normal for them to do that unprovoked, but you’re not the first person they’ve thrown out today.”

The Western States Center, a Portland-based social justice organization, issued a letter denouncing the event. It was cosigned by a coalition of religious and community groups, as well as the state’s Democratic congressional delegation and Gov. Kate Brown as well as other elected officials. “We condemn the bigotry and racism that were always in our community, and that anti-democratic groups and some elected officials have emboldened,” it read.

“The far-right actors behind the May 1 rally do not speak for Salem and they do not speak for Oregon,” the letter went on. “Hate and intimidation has no place in our community, and those who explicitly or subtly encourage violence should be held accountable.”