Chinese booster likely tumbling to Earth in the next 24 hours, and no one knows quite where 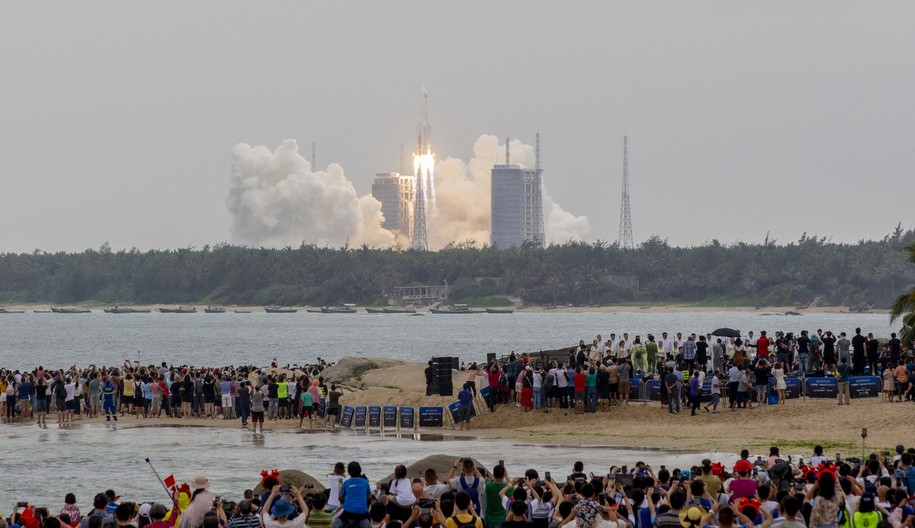 On April 29, China’s National Space Administration launched a new heavy lift vehicle capable of taking over 27 tons of payload to Earth orbit. Although, as it turns out, the rocket is capable of more than that. While previous versions of the Long March 5 rocket included a booster that arced into the sea, the new 5b variant has four additional solid boosters. Those delivered enough power to send the entire first stage—91’ tall and weighing 46,000 pounds even after all the fuel was expended—right on into orbit. In a way, it’s quite an accomplishment.

However, while the payload (the first segment of China’s new space station) was delivered to a stable orbit several hundred miles higher, the booster entered an elliptical orbit so low that it’s still brushing against the upper reaches of the atmosphere. Sometime within the next few days, and likely within the next 24 hours, that orbit will decay.

Then the booster, the size of three school buses laid end to end, will come tearing into the atmosphere at 18,000 hours, likely break apart, and shower some spot on the Earth with debris that could still mass several tons. As an added bonus, absolutely no one knows exactly when or where that impact will come.

This isn’t the first time a large human-made structure has reentered the atmosphere either completely or nearly without control. Just last year, another Chinese Long March 5B rained debris across villages in the Ivory Coast. The booster in that case was slightly smaller than the one now zipping around the planet on one of its few remaining orbits, but it still managed to drop a 40’ chunk of debris near the village of Mahounou. No one was reported to have been injured.

Space stations themselves seem to have a particular problem with uncontrolled reentry. In 2018, China’s Tiangong-1 space station (weighing in at 18,760 pounds) made a reentry over the Pacific Ocean after CNSA lost contact with the station. However, any debris hit the ocean roughly halfway between Australia and South America. In 1991, Russia’s Salyut-7 station (43,700 pounds) shredded apart over the Pacific, with debris reaching coastal areas of Argentina. And in 1979, the United States’ Skylab space station (170,000 pounds) rained down debris over the Australian outback after NASA failed to get the Space Shuttle program up and running in time to boost the station to a higher orbit.

Many smaller objects have tumbled from orbit over the years. So many that roughly a ton a day of manmade objects rain down from space (along with 14 tons of natural space rocks and dust), most of which burns up well before it reaches the ground. Despite a lot of scares—including the reentry of a Soviet-era spy satellite carrying nuclear power—none of this has caused serious injury. (A woman exercising in an Oklahoma park was uninjured after she was grazed by a fragment of a Delta booster in 1997 and five Japanese fishermen received minor injuries from a rain of small debris that struck their boat in 1969.)

But just because there haven’t been any serious injuries or damage caused by manmade objects returning from space doesn’t mean it can’t happen. While odds are extremely good that the Chinese booster will fall either into the ocean or on some unoccupied spot, there are particular concerns about this launch system. That’s because this isn’t a case of some aging system losing radio contact, or a station failing because it ran out of fuel to sustain a stable orbit. What happened with the booster that struck Africa, or the one that’s due to return to Earth this weekend, is no accident. Sending the booster into a short-term orbit followed by an uncontrolled reentry is part of the design of the Long March 5B. With every launch, China is playing a kind of long-odds game, counting on the amount of relatively empty space out there catch the debris.

It’s an action that many others, including other space agencies, have found highly irresponsible.

After watching a whole series of massive stainless steel prototypes crash (SN8), crash (SN9), explode on the ground after a rough landing (SN10), and explode in midair (SN11), it may have seemed that SpaceX was intent on paving Texas in its own brand of space-related debris. But on Wednesday, prototype SN15 (there were no 12-14, because of design changes) defied both windy conditions and cloudy skies to fly to an altitude of 10 kilometers (6.2 miles), hover for a minute, then execute the incredible series of maneuvers that has made landing one of these enormous beasts so difficult.

Rather than coming straight down, tail-first, as do SpaceX’s highly successful Falcon 9 boosters, the Starship design falls on its side, using a system of front canards and rear fins to control its attitude. Falling in this way greatly reduces the speed of the descent, which in turn reduces the amount of fuel needed in the last seconds to land the ship. Since every second the Raptor engines are running they suck down over a ton of methane and liquid oxygen, shortening the landing sequence means saving tons of weight—weight that can be turned into payload delivered to orbit.

To maximize the system requires the “belly flop” maneuver, where a Starship falling on its side knocks itself upright at the last possible moment, fires up one or more engines, and stages a (relatively) soft landing. It’s that final, extremely difficult maneuver that has resulted in the destruction of at least two of the past prototypes.

Now that SN15 has completed the flight successfully, it’s expected that it will be taken off the pad and returned up the road to the construction site for study. In the meantime, SN16 is ready to roll out. If the pace of flights continues, that rocket can be expected to launch some time next month. By making the rockets out of stainless steel and building them in segments similar to the way water tanks are constructed, SpaceX has turned the small area near Boca China, Texas, into a factory that’s capable of building new rockets in a matter of weeks.

It can be difficult to tell the size of the system in these isolated images, but Starship is 164’ high and over 30’ wide. And this is just the upper stage of a system that will eventually include a 230’ booster. It’s intended to be a completely reusable system, with booth booster and upper stage landing and being refueled for flight after flight. If they can pull this off, it will represent a reduction in the cost of flights that is at least an order of magnitude better than any system now operating.

The successful flight of SN15 couldn’t have come at a better time for SpaceX. Just two weeks ago, NASA awarded SpaceX the contract to build a version of the Starship craft designed to carry astronauts from orbit to the surface of the Moon. Two competitors—Blue Origin and Dynetics—have protested the awarded contract, meaning that all involved are going to be in court by August. Only SpaceX is going to be there with a functioning rocket.

Meanwhile up the road, that other billionaire using Texas as a base for his rockets has made an announcement. For over six years, Blue Origin has launched, and launched, and launched its suborbital New Shepard rocket from a site near Van Horne, Texas. The small rocket, which is designed to carry humans on a brief flight that will technically make them astronauts by carrying them across the “Karman Line” for a few minutes of zero Gs, has made 15 successful flights, with the booster landing under its own power while the capsule parachutes down for extra safety.

In many of these flights, the rocket has carried a “human analogue” known as “Manikin Skywalker,” but finally Blue Origin has decided to take the plunge and begin flying real passengers. Blue Origin is now taking bids to be on the very first passenger launch (which will apparently be the first human flight of any kind). Considering that more than 600 people have signed up to fly with Virgin Galactic for a similar suborbital flight at a ticket price of $250,000, don’t expect that first seat to go quickly.

The money raised by the sale is supposed to go to a nonprofit organization launched by Bezos to support STEM education. However, all of this would seem to offer several questions. Among them: Will people be bidding against Bezos? And if he doesn’t want that seat, why not?