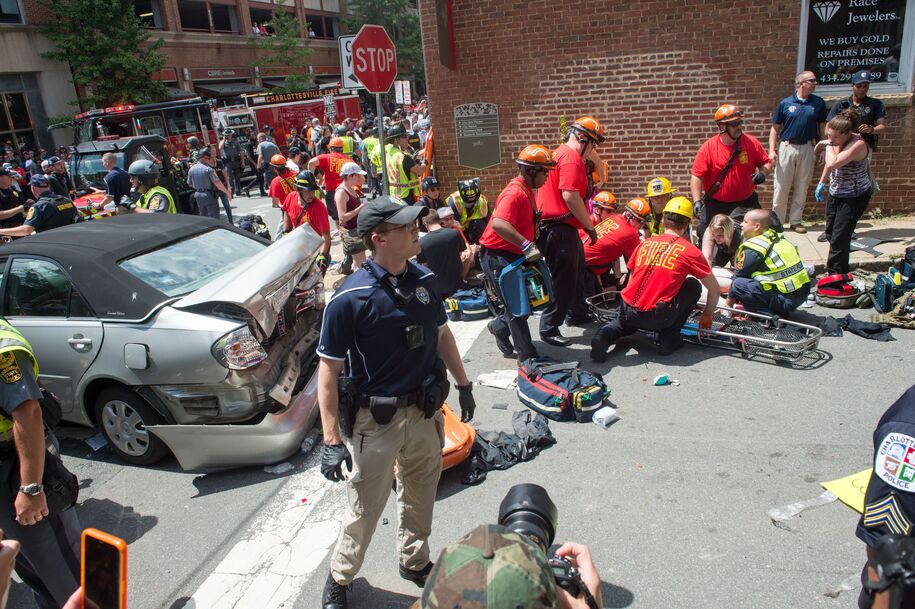 As Republican officials nationwide look to punish protesters who disagree with them, not everyone is letting the GOPs’ attempt to stifle protest slide. While officials in multiple states have passed bills that grant immunity to drivers whose vehicles strike and injure protesters in public streets, some judges are still forging ahead with prosecutions.

In a recent incident, a federal judge ordered a right-wing think tank led by white nationalist Richard Spencer to pay $2.4 million to an Ohio man severely injured at a Virginia rally two years ago. According to the Associated Press, Bill Burke was struck by a driver in a crash that killed a fellow counterprotester during a white supremacist and neo-Nazi rally in Charlottesville. He suffered head and knee injuries and a crushed left arm, which still requires medical treatment, according to Burke’s May 2019 federal lawsuit.

The lawsuit names multiple defendants, including former Ku Klux Klan leader David Duke and the Traditionalist Worker Party. Since the rally was organized by Spencer’s think tank, the National Policy Institute, it is also listed as a defendant. As a result, federal Judge Michael Watson ordered the right-wing think tank to pay $2.4 million in Tuesday’s ruling as an act to close the lawsuit.

“The emotional toll this senseless attack has taken on Plaintiff is extreme,”  federal Judge Michael Watson said. “It has impacted virtually every aspect of Plaintiff’s daily life, and he deserves to be compensated for the harm.”

But while this federal judge supports the rights and protection of protesters, many GOP officials are working to harm protesters by passing legislation that puts them in harm’s way. Bills that grant immunity to drivers whose vehicles strike and injure protesters in public streets have been passed in at least four states including Florida, Oklahoma, Iowa, and most recently Tennessee. These bills are known as anti-riot bills and are aimed at targeting protesters. Instead of holding violent individuals accountable for their actions, GOP lawmakers think it is okay to promote violence as a response to protests that do not agree with their ideology. Republican officials are passing the bills under the guise that they will encourage ‘peaceful’ protesting.

Studies show 93% of racial justice protests are entirely peaceful with no harm to person or property, but that hasn’t stopped Republican-led state legislatures. In many cases, protesters who have been hit by vehicles have died as a result, yet GOP officials seem not to care.

According to Slate, many of these bills were introduced in 2017 after white supremacist rallies in Charlottesville, Virginia, but mostly fizzled out. Following Black Lives Matter protests in 2020, bills were reintroduced in some states noting that someone who is exercising “due care” would be granted immunity for striking a protester while driving and unintentionally causing injury or death.

Drivers striking peaceful protesters is not as uncommon as it may seem. From May 27 through Sept. 5, 2020, alone there were at least 104 incidents of people driving vehicles into protesters, including 96 by civilians and eight by police, according to Ari Weil, a terrorism researcher at the University of Chicago’s Project on Security and Threats, USA Today reported.

At least 34 states have proposed similar “anti-riot” legislation, even though the bills don’t always include drivers. It is unlikely these bills will stand up to legal challenges, but the mere proposal of them sheds light on the reality that GOP officials will stoop to any level to push their agenda.