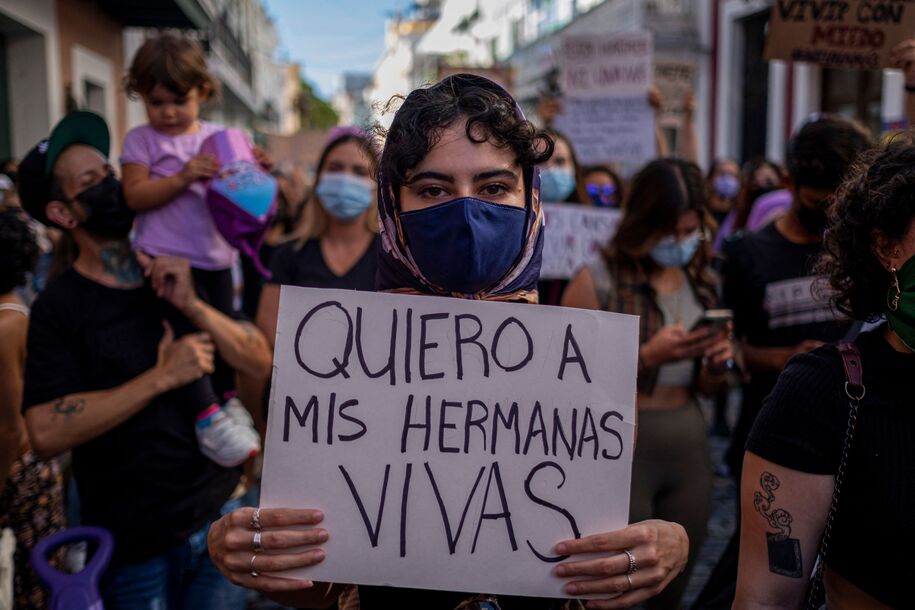 The Junta, (the islanders’ name for the unelected Fiscal Control Board that governs the island’s finances) has finally decided to authorize $7 million dollars requested by newly elected Gov. Pedro Pierluisi to combat what has been declared a state of emergency.

That state of emergency declaration on gender violence was formally issued by Pierluisi in January, after years of pressure from island activists. Even with the declaration, the violence continued; even as I was working on a story about the ongoing epidemic of femicide and murders of transgender people, as well as the activist organizations on the island working to force the government to do something meaningful to stop it, news broke of the $7 million authorization.

Activists were out in the streets Friday, in every one of the island’s municipalities.

Christina Corujo, writing for ABC News, reported that “An uptick (in gendered violence) over the last four years had protesters demanding government action.”

More than 100 days after declaring a state of emergency, Puerto Rico finally will have some funding to address an alarming rise in gender-based violence on the island.

The Financial Oversight Management Board, which is in charge of the island’s finances, on Wednesday approved a $7 million request by Gov. Pedro Pierluisi to be used for different programs aimed at preventing gender-based violence.

“We favor the Fiscal Control Board’s decision to allocate the $7 million budget … for the implementation of public policy to eradicate sexist violence,” Colectiva Feminista, a community-based group, wrote on Twitter.[…]

After the state of emergency was declared and the $7 million was requested, the FOMB initially approved just $200,000. Because Puerto Rico is going through a bankruptcy that began in 2016, the FOMB has the final say in all economic decisions of the government. The island has over $100 billion in debt and pension obligations.

However, that was not all that Colectiva Feminista had to say about the news.

Translation: “HOWEVER, it seems to us hypocritical for the Board to approve austerity measures that imply CUTS to pensions, education, health services, public housing and labor rights. GENDER VIOLENCE IS STRUCTURAL.”

So while the Junta authorized more than the initial piddling peanuts, its members also appear to be talking out of both sides of their necks when they offer money in response to the protests, and because the mainland media is now covering the story, while they simultaneously attempt to slash major economic services the island needs—which, as the Colectiva points out, are part of the root causes of the epidemic of violence.

Andrea González-Ramírez, writing for The Cut, offers background on the issue.

This year alone there have been at least 21 femicides, per the Puerto Rico Gender Equality Observatory; since 2010, more than 150 women have been killed by their intimate partners; and last year, six transgender women were murdered — the highest number in any U.S. state or territory. My yearlong investigation into gender violence found that in 2018, in the aftermath of Hurricane Maria, the intimate-partner murder rate in Puerto Rico spiked to 1.77 out of 100,000 — more than double that of the entire U.S.

The horror of the recent killings and all the violence I’ve reported on before is etched into my brain. How do you make sense of loving your homeland while knowing that so many of your compatriotas hold such a deep hatred of women? How do you live in peace when you often think about the mujeres in your life and whether they are safe? How do you carry the grief of losing every cis, trans, nonbinary, straight, or gay woman who dies at the hands of men? (The perpetrators are almost always men.)

The frequency of femicide in Puerto Rico is alarming, alongside of the number of murders of transgender people. This is not a new problem, nor is it only a problem on the island, given the fact that it is a global phenomenon.

What bothers me is that, though it has briefly become “headline news” in the U.S. mainstream media, it seems to only be because, in the latest brutal murder on the island, the person arrested and charged with the murder of his pregnant girlfriend is a sports celebrity. In some ways, he has garnered more attention than the woman who was killed.

Such is the nature of the media, however we can do better—we can help shine a spotlight on not just “perps,” or even the victims—we can help raise the profiles of the groups who are fighting this ongoing murder epidemic, and support them.

It is these groups who have forced both Pierluisi, and The Junta, to address the issue, and put some funds into the fight.

I realize many readers here and on social media do not read Spanish, and most of the posts from activists on the island are in their language. Here are some groups you can follow; support them by sharing their posts.