The Trump-Cheney schism is scary for the country, but it should be even more frightening for the GOP 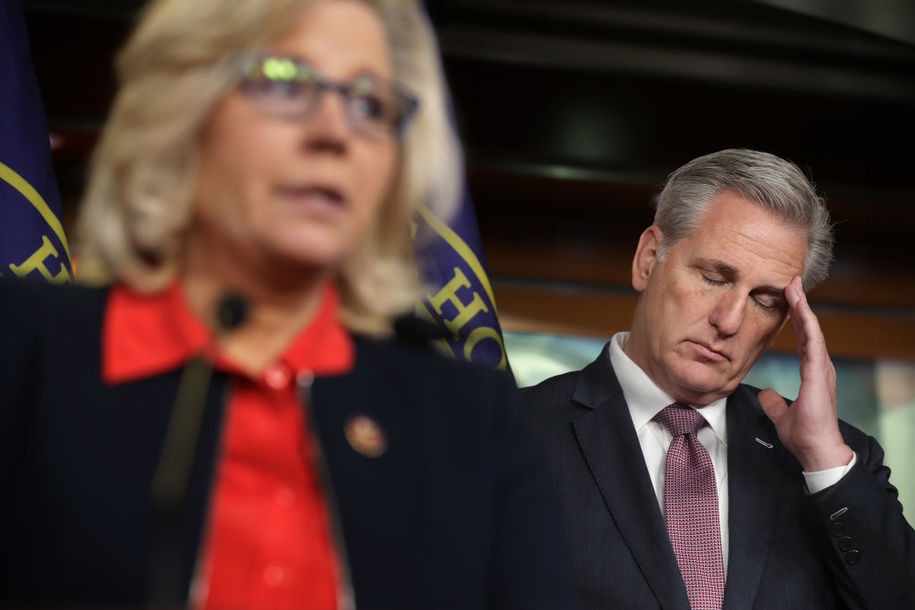 Whenever I feel compelled to freak myself out about the GOP’s seemingly ineluctable march toward cult-of-personality authoritarianism, I have to remind myself that Republicans might not be Hitler boof stormtroopers so much as they’re just lemmings.

For the most part, rank-and-file Republicans still love the guy who tried to geld our democracy with his sputtering lies and audacious bid to reverse the verified and certified results of an election he (very clearly) lost. By a lot. I’ve laughed plenty at this braying buffoon, who, to his most fervent fans, is a semi-divine demiurge reconstituting our democracy at an elemental level out of air, earth, fire, and flop sweat.

Normal humans feel this thing called guilt when they do awful things to other sentient beings. Sawing our 244-year-old republic off at the knees would certainly qualify as “awful,” but I imagine at this point it’s the only thing that could give him an erection.

I felt the usual pang of doom while reading this Washington Post story on the simmering internecine battle between a minority GOP contingent led by Wyoming Rep. Liz Cheney, who thinks America is worth saving, and the party’s majority quisling caucus, who seem all too eager to sacrifice our country on the altar of the Dread Blubber Ba’al.

The heartening part of the WaPo story is that it focuses on Cheney’s determination to keep up her fight against Trump and defend her country and party. I can’t stand Cheney’s politics—or much else about her—but she’s doing important work here, and we should support her, at least in this effort.

What’s frightening, though, is that the story once again points up just how far off the beam “mainstream” Republicans have fallen. The craven capitulation to Trumpism starts at the top, with House Minority Leader Kevin McCarthy, who traveled to Mar-a-Lago earlier this year to kiss Trump’s ring. He has both publicly and privately rebuked Cheney for her focus on preserving democracy and the rule of law. Cheney is likely to be booted out of her leadership position soon, in favor of Rep. Elise Stefanik, a less ideologically pure Republican who is nevertheless in thrall to our deposed Orange Julius Caesar.

Again, it’s scary shit, because what’s happening right now is a big, party-wide loyalty test in which Republicans are expected to pay unyielding deference to the Big Lie as if it’s the GOP equivalent of the Nicene Creed.

So, yes, plenty of reasons to be scared out of our wits. But there may be a silver lining to all this, which is that this insistence on turning one major American party into a personality cult could backfire, bigly.

Why? Even a majority of Republicans is a pretty small cohort in the grand scheme of things, and GOP leaders may be fatally overestimating Trump’s post-Jan. 6 appeal.

After all, the guy lost to Joe Biden for a reason, and it’s hard to imagine he’s a plus for the party going forward.

The debate over Trump’s potentially negative impact on swing districts is likely to escalate in the coming months, as vulnerable Republicans try to position themselves for reelection.

The internal NRCC poll partially shared with lawmakers in April found that President Biden was perilously popular in core battleground districts, with 54 percent favorability. Vice President Harris was also more popular than Trump, the poll showed. Biden’s $1.9 trillion covid stimulus plan and his $2.3 trillion jobs and infrastructure package both polled higher than the former president’s favorability, which was at 41 percent, compared to 42 percent in February.

Biden’s job between now and the 2022 midterm is to keep delivering for the American people, so Trump can continue his long, circuitous journey to the sewage treatment plant … and then out to sea. Our job will be to do whatever we possibly can to hold the House, so that any GOP impulse for overturning a free and fair 2024 election in Congress becomes moot.

We also need to redouble our efforts to challenge unfair voter suppression laws and, even more importantly, get our base out in droves. If the specter of Trump, who is making Republicans less and less popular in the suburbs every day, still hangs over our country in 2022, we might actually be able to hang onto our House seats, or even expand our slim majority. Whether we collapse under the weight of Trumpism or further extricate ourselves from that noxious swamp is up to us.

The time for celebrating Biden’s victory is over. The time for digging in and defending this country against the Big Lie and the Big Doofus has arrived.