‘It felt like a miracle’: Mom reunites with family in U.S. three years after deportation 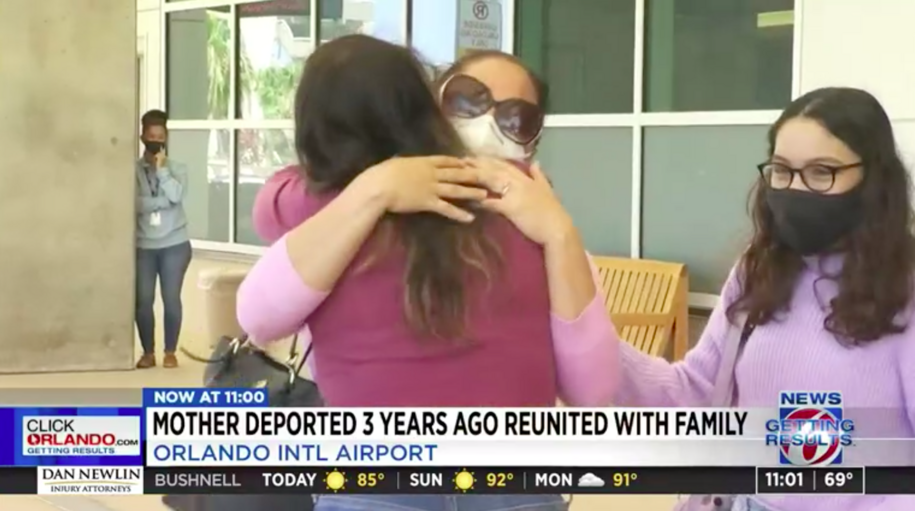 Alejandra Juarez returned home just in time to celebrate Mother’s Day with her family. Cruelly targeted for deportation by the previous administration despite being a military spouse and having no criminal record, the mother of two U.S. citizens returned home on Saturday after being granted humanitarian parole by the Biden administration.

While some families might prepare a meal for mom on Mother’s Day, The Ledger reports that Juarez wanted to make a breakfast of chorizo and eggs and pancakes for her family after being away for three years. “The only word I can tell you is it felt like a miracle,” she told the outlet. “It is a miracle, if you look at my history. I have a life bar, meaning that I was never supposed to be able to step into American soil. It is incredible. It is unbelievable. I can’t digest it. I can’t grasp it yet. I’m still in shock.”

In a statement released on the day of Juarez’s return home, Rep. Darren Soto said that her deportation to Mexico by the previous administration in August 2018 “shook our Central Florida community to the core, but we never stopped fighting for her return. Now, under the Biden administration, she was granted humanitarian parole and will have the opportunity to be present in Estela and Pamela’s lives.”

On Saturday, Juarez’s daughters gathered outside an Orlando airport to wait their mom’s arrival. They carried with them a handwritten sign reading, “President Biden and Kamala Harris rock!” In a video released by immigration reform advocacy group FWD.us, Estela, who is Juarez’s youngest, admitted she was “kind of nervous” because the family had been apart for so long. “Everything’s gonna go back to normal, but also everything’s gonna change,” she said.

New national TV ad of Alejandra, a military wife & the mother of 2 U.S. citizen daughters, who came home in time for Mother’s Day after fighting for 3 yrs to be reunited with her family. Congress must pass a path to citizenship to ensure families like Alejandra’s stay together. pic.twitter.com/CXkfFZbQ3q

Now reunited, the family shared their experience in an interview with MSNBC’s Alicia Menendez, where Juarez called their years-long separation “the most painful moment that I have gone through and probably will go through. After this, nothing will be harder than that.” They were joined in that interview by Rep. Soto, who urged the need for permanent relief for the family. While the Biden administration may choose to renew Juarez’s one-year status, it still remains temporary.

“[O]ur fight is not over until Alejandra is granted permanent stay and all separated families are brought back together,” Soto said in his statement from last weekend. “During the remainder of the 117th Congress, we must pass H.R. 163, the Protect Patriot Spouses Act and other key bills to fix our immigration system and prioritize families.”

WATCH: Alejandra, a military wife who was recently reunited with her family after 3 years, shares her story with @AliciaMenendez “The fight is far from over. Congress must pass a pathway to keep families like mine together…My family remains at risk of being separated again.” pic.twitter.com/mZ9Aj3GmlT

FWD.us said in a statement received by Daily Kos that nearly 6 million U.S. citizens live with at least one undocumented family member, “which means millions of families across the country live with the constant threat of being separated like Alejandra’s unless Congress passes a pathway to citizenship for the 11 million undocumented immigrants currently living in the U.S.”

“[I]f Congress and the White House do not take diligent steps, my family remains at the risk being separated again,” Juarez continued during her MSNBC appearance. “I cannot put my kids through this. My body won’t take it … we need Congress to act now.” In his first address to Congress last month, President Biden called on legislators to “end our exhausting war over immigration. For more than 30 years, politicians have talked about immigration reform and we’ve done nothing about it. It’s time to fix it.”