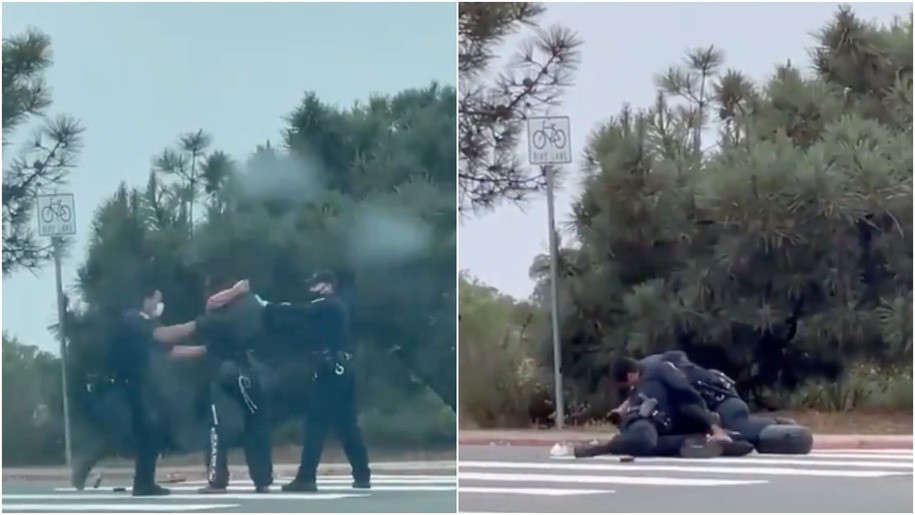 A San Diego resident caught police on camera pummeling a man she identified as homeless after police said he urinated in public. Nicole Bansal told the San Diego Union-Tribune she was driving when she saw police vehicles racing past her, and she started recording on her cell phone when she recognized the man officers were targeting Wednesday morning in La Jolla. “There was no movement made to de-escalate,” Bansal said. “The immediate movement was to take him down. I don’t understand.”

The video shows one officer holding the man’s arm while another tackles him from the back. The officers brought the man to the ground, and one can be seen clearly punching him repeatedly in the face. “Stop,” Bansal shouted from her car. The officers could be heard yelling, “stop resisting” and “put your hands behind your back.”

At one point in the encounter, the man being pummeled by police grabbed an officer’s radio, threw it, and swatted at the officer’s face, the San Diego Union-Tribune reported of the video. As more police vehicles arrived on the scene, additional officers ran to the beaten man and struggled with him before a police SUV obstructed Bansal’s view. She described officers’ actions to the San Diego Union-Tribune as “so excessive and unnecessary.”

WOW. These @SanDiegoPD officers repeatedly PUNCHED a homeless man in the head and legs for urinating in public! Where was the de-escalation?! Where was the compassion?! Another example of police using excessive force in an unjustifiable situation! pic.twitter.com/XPOtmmU1D3

San Diego police Lt. Shawn Takeuchi told the San Diego Union-Tribune internal affairs is investigating the encounter, which began when the 34-year-old man ignored officers who witnessed him urinating in public. “From a distance, the officers tried to talk to the man. The officers decided to approach the man because urinating in public violates the law,” Takeuchi wrote. “The man would not stop to speak with officers therefore an officer held the man to detain him.” Takeuchi said the man was taken to the hospital and later released and arrested on three felony counts of resisting a police officer and three misdemeanor counts related to throwing the radio and battery of an officer.

Amie Zamudio, an advocate who was featured in the local La Jolla Light for her work with homeless populations, created a GoFundMe page to pay for the legal fees and an emergency hotel stay for the man targeted by police. “We have been asking the City and the County for more resources and restrooms for our houseless neighbors in San Diego,” Zamudio said on the fundraising page that has already attracted more than $7,800 donations. “This is all very unfortunate and easily could of been avoided. We want to aid in creating a pathway to healing and success for this man.

“Many of the UCSD students have found him to be very kind and peaceful and enjoys reading books.”

Francine Maxwell, president of the NAACP’s San Diego branch, penned a letter to Police Chief David Nisleit demanding accountability for what Maxwell called an “assault on an unarmed black man.” “We are deeply saddened and angered to see the San Diego Police Department act with such violence against someone who presented no apparent risk to anyone,” she wrote. “To yell ‘stop resisting’ and to continually punch and slap this man was clearly not conducive to calming the situation.

“The SDPD has a de-escalation policy that requires you to use time and space to defuse a situation, rather than immediately move to force.  It seems to us that there was ample space to de-escalate.  Why didn’t they? We want to know if this is how the SDPD envisions de-escalation. Did it really require eight police officers to subdue this barefoot homeless man?”

Maxwell added: “We were told that this man is well known to the neighborhood. If these officers were familiar with the community they were serving, they might have known he presented little risk. We will not accept unnecessary violence against our citizens. We call for an immediate investigation into this matter.”