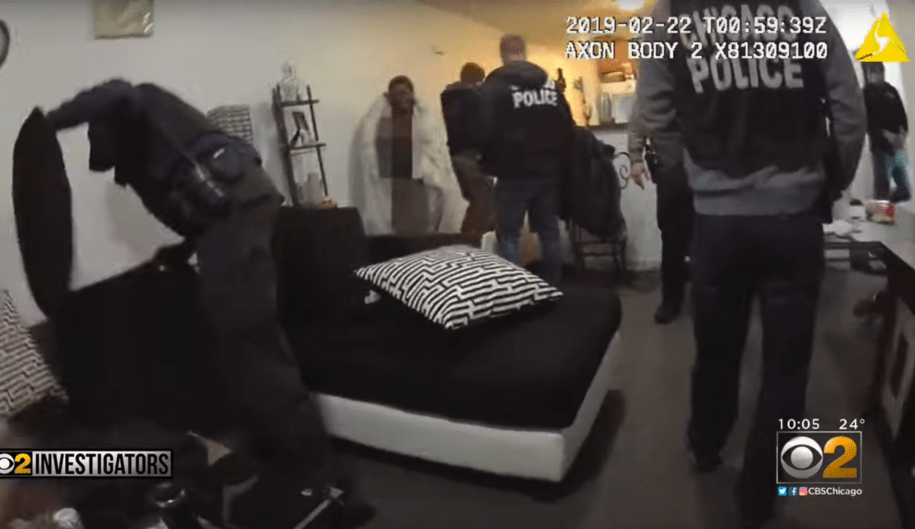 Anjanette Young’s home was raided by Chicago police in February 2019. Young, a 50-year-old social worker, had just gotten home from work and was changing out of her work clothes, getting ready to decompress from the day and watch television. Just then, police barged into her home, handcuffed her, and left her to stand there, naked, for 10 minutes. A blanket was thrown loosely over Young, who, bewildered at this outrageous violation of her civil rights, told the nine male officers that they had the wrong home. She told them this at least 43 times as they wandered about her place, fully suited up in Chicago Police Department raid gear. Young was finally allowed to dress after 10 minutes, then was handcuffed again for another seven minutes. After searching her home, Chicago police agreed that they had descended upon the wrong address.

It took a full year for video of the event to finally be released to the public. It took a Freedom of Information Act request followed by a federal lawsuit against the city of Chicago, a local news outlet fight with the Chicago Police Department, and the general pressure of national calls for racial justice and transparency in the many clearly unreliable law enforcement operations across the country for the video to see the light of day. It has been a little more than four months since the public saw the video of Young having her Constitutional rights violated and 26 months since the incident itself. Now the Civilian Office of Police Accountability (COPA) has released their report on their findings from that night. According to COPA, “The investigation produced nearly one hundred allegations of misconduct stemming from the actions of more than a dozen officers.”

COPA reports that it has spent the last several months conducting “more than 30 including officers, civilians, a member of the judiciary, an assistant state’s attorney and the Cook County Sheriff’s Department, as well as the review of hundreds of pages of documentary evidence and hours of video material relevant to this incident.” Some of the evidence and materials being looked into probably include the fact that the 23-year-old suspect that the Chicago police were supposedly looking for was reportedly “wearing an electronic monitoring device,” which could easily have been used to locate him if anyone was accomplishing the most basic procedures of their job.

And while it isn’t necessarily a part of the COPA investigation, it is clear that city officials like Mayor Lori Lightfoot have been saying one thing to the public while doing something entirely different behind the scenes. Lightfoot has come under fire for first saying she did not know about the raid before a news investigation uncovered the story, then having to admit she did learn about it after internal emails between herself and an aide revealed that she was aware of the wrong-house raid at least one month earlier than she claimed.

On top of this, COPA remained unaware of this botched raid until November 2019 when Young’s attorney at the time asked for any recordings of the raid. This is seven months after the raid took place. As Block Club Chicago reported, this mishandling of things was the excuse the police department took advantage of to deny Young’s request for video of the misconduct by the Chicago Police Department.

After Young’s FOIA request, the city asked for a five business-day extension to respond, a provision allowed by the law and frequently used by public bodies. During the five-day extension, the emails show police officials reviewed the video and made redactions ahead of the pending release to Young.

On Nov. 15, 2019, Ganiyu [Police Department attorney Vaughn Ganiyu] followed up with COPA, again asking the agency to search its database and let him know “as soon as possible” if there was a pending investigation.

On Nov. 18, 2019, one day ahead of the new deadline to respond to Young, Jason Szczepanski, a FOIA officer working for COPA, confirmed the “pending investigation” and said “disclosure of such file will interfere with our pending and active investigation into this matter.”

Calling the raid “truly painful to watch,” COPA Chief Administrator Sydney Roberts released a statement saying that the “significance of this investigation” required that “COPA assigned this case to a uniquely constructed 10 member team to evaluate the critical Fourth Amendment issues raised in this complaint. While we cannot fully heal the pain Ms. Young experienced on that day and ever since, we hope that our investigation and recommendations will enable the healing process.”

This remains to be seen. Will the police officers involved be punished? The treatment of Young, the laziness of the Chicago police in conducting this entire operation, and the negligence of the most foundational call to protect and serve the public need to end. Saying you’re sorry about things while not changing anything or getting rid of people who are clearly bad at the job you say they are supposed to be doing is not a solution. COPA’s investigation is a good step, but it is only a step. We will see what comes of it in the coming weeks and months.