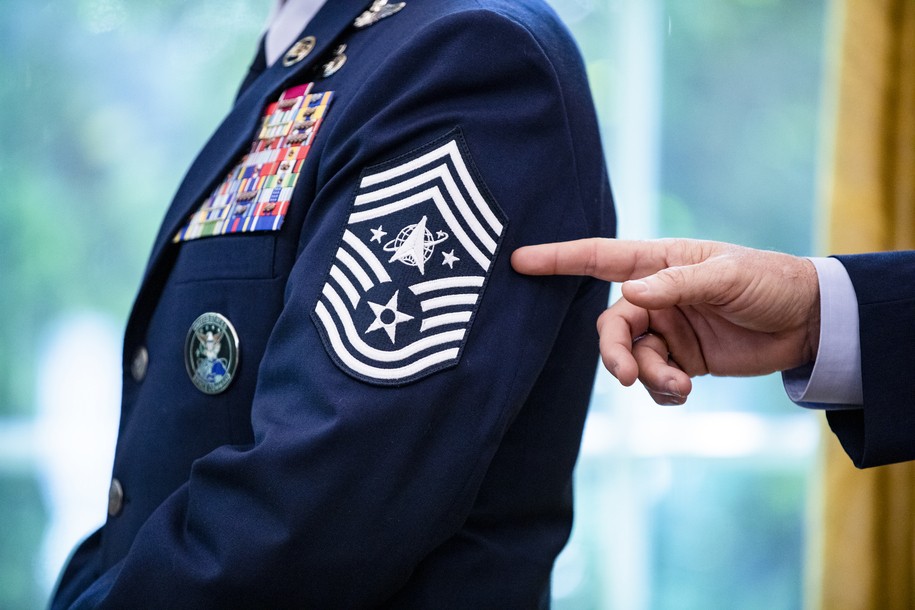 Donald Trump’s Space Force idea always seemed like a grade-school concept fueled by prepubescent boys’ fantasies featuring Buzz Lightyear and coloring book ideas about both space travel and the military. No doubt that’s why it’s been the source of so much unintentional hilarity since Trump signed off on creating it, including its painfully obvious Star Trek-derived logo.

So it’s really not a surprise that it apparently managed to attract recruits enamored of the radical right’s coloring book version of politics, like everything else Trump-related—such as the Space Force commanding officer who just lost his job because he not only embraced the white nationalist “cultural Marxism” hoax, but published a book and hosted a podcast attacking the American military for supposedly succumbing to its nefarious leftist wiles.

As first reported by Oriana Pawlyk at Military.com, the head of Space Force Command handed down walking papers to Lt. Col. Matthew Lohmeier, the commander of the 11th Space Warning Squadron at Buckley Air Force Base in Colorado, after his verbal attack on the military on a podcast discussing his new self-published book, which claims that American armed forces are being destroyed from within by cultural Marxism.

The book’s title: Irresistible Revolution: Marxism’s Goal of Conquest & the Unmaking of the American Military. Lohmeier’s promotional description of the book: “Irresistible Revolution is a timely and bold contribution from an active-duty Space Force lieutenant colonel who sees the impact of a neo-Marxist agenda at the ground level within our armed forces.”

He made the comments that got him booted from the Space Force on the podcast “Information Operation” with L. Todd Wood last week. Lohmeier told Wood that the military’s recent efforts to confront the presence of white nationalism and other forms of far-right extremism within its ranks—an initiative directed by Defense Secretary Lloyd Austin and driven by the Jan. 6 Capitol insurrection, in which one in five participants were either active or former members of the military—was actually part of a Marxist conspiracy that would leave the nation divided.

Lohmeier told Wood that, as a commander his intent wasn’t to criticize any particular senior leader or publicly identify troops he felt had succumbed to Marxist ideology. He said that instead, he was primarily concerned with how certain agendas “that are now affecting our culture” were being required for service members.

He indirectly criticized Austin: “I don’t demonize the man, but I want to make it clear to both him and every service member this [diversity and inclusion] agenda, it will divide us, it will not unify us.”

“This decision was based on public comments made by Lt. Col. Lohmeier in a recent podcast,” a Space Force spokesperson told Pawlyk by email. The Space Force commander, Lt. Gen. Stephen Whiting, “has initiated a Command Directed Investigation on whether these comments constituted prohibited partisan political activity.”

Lohmeier’s promotional material for the book promises readers that “after becoming aware of the Marxist conquest of American society, you will never again look at things in the same way.”

“Lohmeier provides answers to many important questions that Americans are currently asking: Is systemic racism a reality, or is much of our talk about race merely a rhetorical tool used to divide Americans?” the book’s description reads. “Why has the Defense Department suddenly shifted to a focus on extremism within the ranks? Is there really a white supremacy or white nationalist problem within our armed forces? Are the many Diversity and Inclusion trainings that are being conducted in our federal agencies helping solve these problems, or are they creating conflict where none previously existed? What is Marxism, and what does it have to do with all of this?”

Lohmeier has argued in various interviews that part of that “conquest” has taken place in the U.S. military. “What we saw taking place in the country and in the military, frankly, during this past year especially was reminiscent of Mao’s cultural revolution where you had to toe a certain party line,” Lohmeier told conservative radio host Steve Gruber, referencing Mao Zedong’s lethal cultural revolution of the 1960s, which is blamed for some 1.5 million deaths in China.

“The diversity, inclusion and equity industry and the trainings we are receiving in the military … is rooted in critical race theory, which is rooted in Marxism,” Lohmeier told Wood.

After he was removed, he insisted there was nothing partisan about all this. “My intent never has been to engage in partisan politics. I have written a book about a particular political ideology (Marxism) in the hope that our Defense Department might return to being politically non-partisan in the future as it has honorably done throughout history,” Lohmeier told Military.com.

In reality, the cultural Marxism theory he’s spouting has become a regular talking point for a number of right-wing pundits intent on blaming all of society’s ills on liberals and leftists. It’s also an utter hoax invented and first promulgated by white nationalists, created out of the whole cloth of spurious history and intentional misinterpretations of early 20th century academic texts.

Lohmeier demonstrated his gullibility when it comes to conspiracist disinformation by his interview references to a “Pentagon spokesperson” who supposedly said “there are too many white pilots” amid an ever-increasing pilot shortage. Pentagon spokesman John Kirby clarified that he had never said any such thing.

Lohmeier may be out of a job, but naturally the right-wing ecosystem is providing him a nice parachute: His book has become a right-wing cause célèbre, rising to the top of numerous Amazon bestseller lists in the process. Republican lawmakers and right-wing pundits have come rushing to his defense, including such congressmen as Matt Gaetz of Florida, Ken Buck of Colorado, and Dan Crenshaw of Texas.

Gaetz vowed to use his post on the House Armed Services Committee to seek “action” on Lohmeier’s firing, but did not specify what that would entail. He called Lohmeier’s work patriotic and praised him for speaking out against “the attempted wokeification of our military.”

“We need to be preparing our warriors to fight and win battles, not how to be SJWs,” Crenshaw wrote on Twitter. “Far left critical race theory is taught while speaking out against MARXISM is punished??”

The cultural Marxism theory has been worming its way into right-wing demagoguery for the past decade, and made its way into the halls of government under the Trump administration. In August 2017, a memo written by a Trump-appointed analyst named Rich Higgins at the National Security Council was leaked to the press, revealing that he was a believer in the cultural Marxism claims.

The memo was written to describe a nefarious plot against the new administration.

“This is not politics as usual but rather political warfare at an unprecedented level that is openly engaged in the direct targeting of a seated president through manipulation of the news cycle,” Higgins wrote. “It must be recognized on its own terms so that immediate action can be taken. At its core, these campaigns run on multiple lines of effort, serve as the non-violent line of effort of a wider movement, and execute political warfare agendas that reflect cultural Marxist outcomes.”

Higgins, who had previously held a position in the Trump campaign and was associated with former national security adviser Michael Flynn Sr., was among several high-level staff members who were fired in the internal furor that arose within the National Security Council over its authorship.

According to Foreign Policy, which first published Higgins’ memo, one of the administration officials who read it was Donald Trump Jr., who then passed it along to his father, the president. According to the article’s sources, Trump “gushed over it.” It also reported that when Trump later learned from Fox News’ Sean Hannity that the memo’s author had been fired, the president was “furious,” according to a senior administration official. “He is still furious.”

The reality this episode reflects is that Trump’s Space Force was created out of a conspiracist vision for the future in which America must compete with Marxist foes in outer space as well, and Lohmeier in that regard was a perfectly emblematic recruit. It also underscores the reality that this is a project that has earned being relegated to the fetid cloaca of discarded Trumpian effluvia.