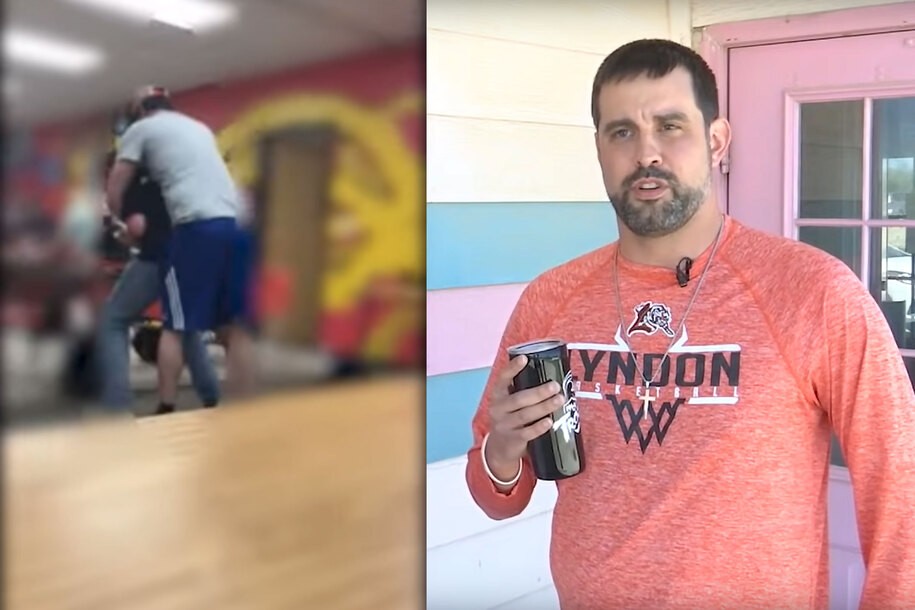 On Wednesday, Kansas state Rep. Mark Samsel pleaded not guilty to three misdemeanor battery charges in the Franklin County District courtroom. The Republican politician was arrested on the charges back on April 29, stemming from an incident inside of Wellsville High School when Samsel was acting as a substitute teacher. The incident took place in an art class at the school, where students surreptitiously videotaped Samsel’s very bizarre behavior as he spoke to students about everything from sex to God knowing whether or not students masturbated to overwrought pronouncements about suicidal teenagers who were suicidal because they had same-sex parents.

The specific charges against Samsel come from allegations that he kneed a student in his nether regions and then kneeled on him. Both allegations were denied on Wednesday by Samsel and his attorney. According to the Kansas City Star, “Magistrate Judge Kevin Kimball also ordered Samsel to obtain a mental health evaluation within the next three weeks as part of the conditions,” and Franklin County Attorney Brandon Jones requested that the $1,000 bond issued be conditional. Those conditions require that Samsel have no contact with his alleged victims, no access to unsupervised children, and no alcohol, drugs, or firearms in his possession at any time.

Since his arrest and the publishing of videos of the incident, Samsel has continued acting strangely, saying that the entire event was planned and choreographed. “Every little bit of it. That’s right. The kids and I planned ALL this to SEND A MESSAGE about art, mental health, teenage suicide, how we treat our educators and one another. To who? Parents. And grandparents. And all of Wellsville.”

While video of that entire incident does not show the alleged assault, it does show the aftermath, with Samsel asking if one of the students is all right. The numerous videos (which can be seen below) seem to show very erratic and strange behavior on the part of Samsel. At one point in the video he seems to be blaming fellow Kansas Republican Ty Masterson for teen suicides, saying “He’s called the Senate president, Ty Masterson, from Andover, Kansas. He is the devil disguised in a suit and a smile. And Christians follow him because they don’t realize he’s the devil. Is that funny? Yeah, it is, excuse my language, fucking our state of Kansas right now and it’s causing kids to kill themselves and I have to attend their funerals knowing what’s going on.”

Masterson told the Star that he didn’t recall ever having a conversation with Samsel, giving the newspaper the statement that “I have no response to what is clearly the deranged rantings of a troubled man. It is obvious from the shocking videos he shouldn’t be in a classroom or around children.”
According to the school the incident was reported to school officials on April 28, and Samsel’s arrest happened the next day.
YouTube Video

And here’s an edited interview Samsel had with KSNT News shortly after his arrest.