Five Oregon counties vote to consider joining ‘Greater Idaho,’ which also is friendly to the idea 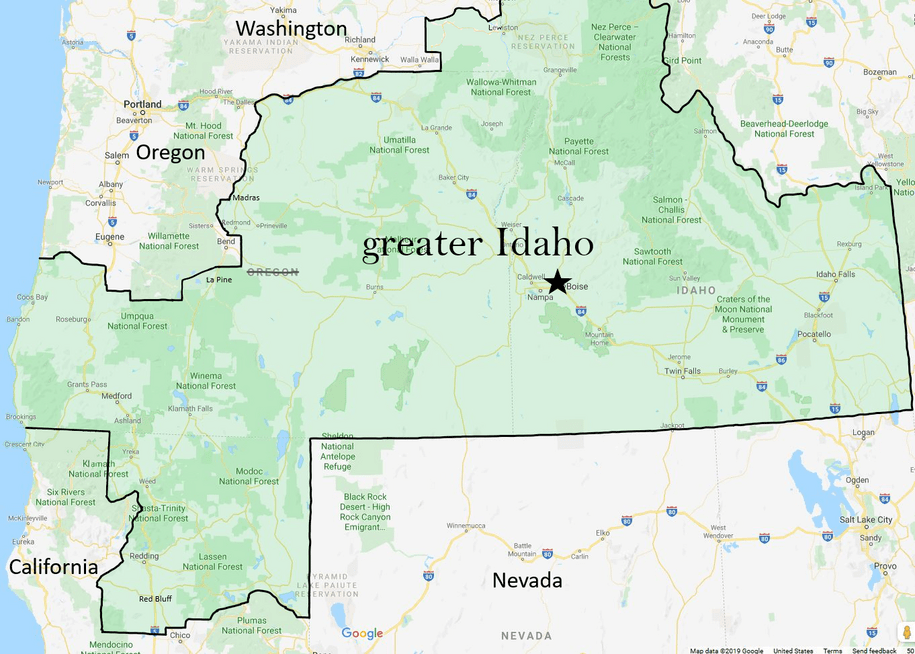 It’s becoming increasingly self-evident that Republicans no longer support democracy because they know they can’t enact their right-wing agenda through normal democratic means—that is, by persuading a majority of their fellow citizens to join and vote with them. So they are falling back on the usual means of authoritarian minority rule: voter suppression, creating mechanisms for overturning results, and that old standby, threatening to secede from liberal democratic rule, which has been an especially popular theme after Joe Biden’s November election.

Conservative voters in five Oregon counties recently chose to go the latter route, voting by fairly wide margins to approve a plan to secede from the state and form a new “Greater Idaho” by becoming part of that very conservative state. Voters in Baker, Grant, Lake, Malheur, and Sherman counties held a special election Tuesday and approved proposals for their county commissioners to consider to “move the Idaho border.”

In doing so, they joined Jefferson and Union counties, which approved similar resolutions in the November election. The plan was most popular in Lake County, where 74% of voters backed the plan, while 62% of voters in Grant and Sherman counties supported it. The closest vote was in Malheur County, where approval came in at 54%. (Turnout was lower than 50% in every county except Sherman, where 51% of registered voters participated.)

“This election proves that rural Oregon wants out of Oregon,” Mike McCarter, president of Move Oregon’s Border for a Greater Idaho, said in a statement. “If Oregon really believes in liberal values such as self-determination, the Legislature won’t hold our counties captive against our will. If we’re allowed to vote for which government officials we want, we should be allowed to vote for which government we want as well.”

Republican officials in Idaho are clearly open to the plan. “I understand why many people want to be Idahoans,” Gov. Brad Little said in a statement. “They’re looking at Idaho fondly because of our strong economy, regulatory atmosphere and our values. Still, the decision to change Idaho and Oregon’s borders would need to go through both states’ legislatures and the U.S. Congress for approval. There’s a lot that needs to happen before the border is within the realm of possibility.”

The plan would put 22 of Oregon’s 36 counties under Idaho’s jurisdiction. Oregon’s Democratic-controlled legislature is unlikely to approve any such plan.

Other versions of the “Greater Idaho” proposal would include some counties in northern California and others from eastern Washington. A similar proposal—to carve out a 51st state from conservative eastern Washington counties called “Liberty”—has been promoted avidly by several far-right factions in that region, led by extremist ex-legislator Matt Shea.

These kinds of quasi-secessionist campaigns have floated around among right-wing extremists for many years in what the Southern Poverty Law Center aptly describes as the “long-running history of malcontents, racists and secessionists actively promoting policy through allies at the state level throughout the country.” Neo-Confederates have argued for a “second secession” by Southern states, while Texas has been home to a variety of “Texas Republic” schemes by far-right “Patriots.” In recent years, conspiracy theorists claiming the United Nations secretly controls federal environmental regulation have tried to create a “State of Jefferson” in northern California.

“We fully well believe that there is a plan in place to destroy America as it stands and remove the constitution of the law of the land and place us under a one world order,” Robert “Red” Smith, a leader of the “Jefferson State” movement, told a room full of listeners in Redding, California, in 2016. “I mean it’s time to quit talking about it and really open your eyes and understand that’s the fight we’re in.”

The eastern Oregon counties seeking to join Idaho—as well as those in eastern Washington—are also included in what other far-right Patriot organizers call the “American Redoubt,” a kind of survivalist anti-government movement that wants to create a separate governmental entity that would subsume all of Idaho, Montana, and Wyoming.

Threatening secession has long been a predictable Republican response to losing elections. In 2008-2009, Texas led a parade of states where officials discussed the possibility of leaving the union unilaterally after Barack Obama won the presidency. The idea gained traction in right-wing media as well; Fox News’ Glenn Beck in particular helped root for secession on his daily show.

The same happened again in 2012-2013 after Obama’s reelection. Some eight states successfully filed secession petitions on a White House website that December, though the petitions naturally were rejected as unconstitutional. Texas again led the pack with 117,373 digital signatures.

Other secession movements, including one in Maryland to again form a 51st state, joined in the sore-loser festivities. As I observed at the time:

Their antipathy to democracy always creeps out, even in their conspiracy theories (how many times have we heard the far-right refrain, “This is a republic, not a democracy!”), but more importantly in their actions and their political strategies, embodied most recently in the gutting of the Voting Rights Act and the ongoing efforts at voter suppression by conservative Republicans.