The Dakota Access Pipeline is a stark violation of Indigenous sovereignty 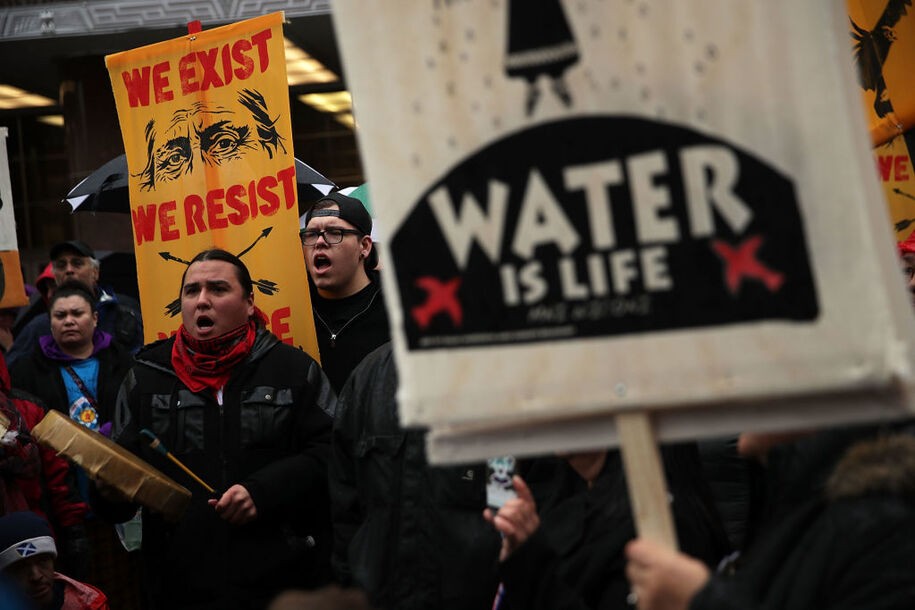 For many, myself included, 2016 was a pivotal year. In a moment that will be forever marked in our minds, the rise at Standing Rock against the Dakota Access Pipeline (DAPL) created a resurgence in the modern-day Indigenous people’s movements.

The images of state-sanctioned violence targeting water protectors and pipeline fighters made it clear that the global injustices threatening Indigenous people aren’t a thing of the past—they are in fact ongoing. The ripples created by those images and the strength of the protest were so large that even while I was in Morocco as a youth delegate to the United Nations Climate Change conferences (COP22), we were holding solidarity actions alongside the Indigenous peoples of Morocco for Standing Rock.

While the fight against DAPL is often dominated by those who see the struggle solely through the lens of lessening fossil fuel dependency, the real core issue is the fight for respect for Indigenous sovereignty and land rights. The pathway of DAPL violates Oceti Sakowin Treaty lands and is a direct transgression of human rights and federal law. In fact, the DAPL is in direct opposition to the Biden administration’s current climate plan, which aims for the U.S. to have a 100% clean energy economy and net-zero emissions no later than 2050. However, the administration recently decided to allow oil to continue running through the pipeline without the proper environmental permits.

The myopic focus on closing the pipeline to lessen fossil fuel dependence rather than out of respect for Indigenous land rights ultimately puts both the environment and Indigenous sovereignty at risk. The U.S. government needs to stop putting profit or so-called “energy independence” over people and the environment, and start respecting the right of Tribal nations to protect and determine how our land is used.

With the pathway of DAPL placing the sole source of the Standing Rock Sioux’s drinking water at risk and devastating their land, we have to remember that the rallying cry to “Shut Down DAPL” is really the cry to heed Tribal sovereignty. This is a generations-old fight, and one that non-Indigenous people must begin to invest in alongside us to shift the narrative that the U.S. government and its industries have held when approaching Indigenous peoples to develop Indigenous land, especially when that “development” is so often detrimental to Indigenous communities.

The required “consultation” of affected Indigenous communities by potential developers is not enough, especially when answers given by Indigenous people aren’t accepted if they contradict the interests of the fossil fuel industry. Supporting and respecting our “no” regardless of how it impacts fossil fuel corporations would be an improvement over five decades of failed federal agency consultation. It would also acknowledge Indigenous human rights by following the global principles established under the UN’s Declaration on the Rights of Indigenous Peoples (UNDRIP) for Free Prior and Informed Consent (FPIC).

FPIC honors Tribal nations’ rights to self determination, and is key to centering Indigenous sovereignty. A culture of consent needs to extend to Tribal nations when their land is sought out by industry or other development. In other words, unless a Tribe expresses a clear intent to work with industry, their “no” must be listened to and respected.

Moving into a consensual relationship with tribes means respecting their word, as well as recognizing the best international practices as described in UNDRIP. The Biden administration’s refusal to stop the pipeline from illegally operating as the Army Corps of Engineers conducts their environmental impact statement is especially hypocritical after the release of the Biden-Harris plan for Tribal nations. The plan highlights goals like:

Within these three goals alone, the Dakota Access Pipeline is in direct opposition:

The plan for Tribal nations makes it clear the Biden administration is aware of how to get to it right, and as Vice President Kamala Harris was recently quoted as a few weeks ago in a video clip, it is now more than apparent that they know what is at stake. In her first trip back to her home state of California, while touring a water treatment plant in Oakland, Harris was quoted saying, “For years and generations, wars have been fought over oil. In a short matter of time, they will be fought over water […] We must address inequities in access to clean water, at local state federal levels.”

In a global movement that was built around the simple statement of “water is life,” it is cringeworthy to watch Harris speak just days before this crushing decision was dealt to the Standing Rock Sioux. The Biden administration’s decision to remain complicit in this decision makes it clear that a few thousand temporary jobs are more important than the drinking water of 18 million Americans.

Respecting Tribal sovereignty is one of the key ways to mitigate climate change. In a world filled with ecosystem collapse, we must protect the rights of the people who know best how to safeguard it.

Kailea Frederick (she/her) is a mother of Tahltan, Kaska, and Black American ancestry. She is a graduate of the International Youth Initiative Program and a Spiritual Ecology and Boards & Commissions Leadership fellow. Kailea has been a youth delegate to the United Nations Climate Change conferences twice, and currently serves as the Climate Justice Organizer with NDN Collective, the editor for Loam, and as vice chair of the Petaluma Climate Action Commission. Her prayer is that those on the front-lines of climate change and extractive based industry are able to find justice and peace for their communities.