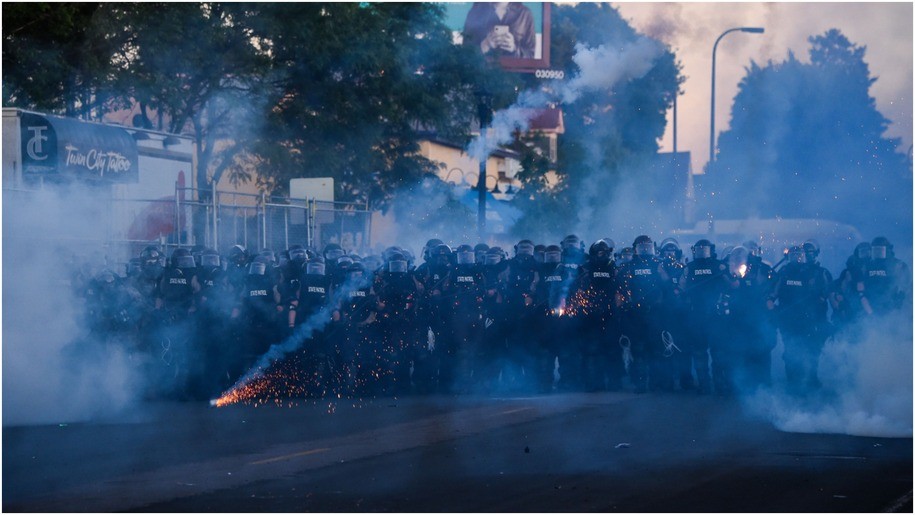 A Black security guard hired to protect journalists covering protests after George Floyd‘s murder in Minneapolis is suing the Minnesota State Patrol after troopers arrested him and bypassed white members of the media. Renowned civil rights attorney Ben Crump, who is representing Cooper along with two other law firms, said in a news release on Tuesday that “ironically” Cooper was hired to protect journalists a day after other journalists of color were arrested while doing their jobs.

“Despite Mr. Cooper being cooperative, lawfully present at the protests and lawfully carrying a handgun, Mr. Cooper was arrested by Minnesota State Troopers and detained in the Hennepin County Jail for nearly 20 hours for a curfew violation and unlawful possession of a firearm,” Crump said in the release. “Despite being accompanied by numerous white members of the press at the time, Mr. Cooper was the only one arrested.”

Attorney Antonio Romanucci, who’s also representing Cooper, said in his statement that the “irony of Mr. Cooper’s arrest and mistreatment can’t be understated.” Cooper was arrested five days after former Minneapolis police officer Derek Chauvin killed George Floyd on May 25, 2020 by kneeling on his neck for more than nine minutes. “As the city was engulfed in protests for the harsh mistreatment of a Black man by Minneapolis police, Mr. Cooper himself was mistreated by state law enforcement officers, which is both baffling and extremely disappointing,” Romanucci said. “We are committed to securing justice for Mr. Cooper for the way his civil rights were violated.”

Cooper was on the same reporting team as Omar Jimenez, a Black and Latino CNN correspondent who was arrested on live TV while covering the protests on May 29, 2020. CNN tweeted at the time: “A black reporter from CNN was arrested while legally covering the protests in Minneapolis. A white reporter also on the ground was not.” Attorneys said in the lawsuit on Cooper’s behalf that the “selective arresting of Black media members was not coincidental.” “It was intentional and racially motivated,” the lawyers added.

A black reporter from CNN was arrested while legally covering the protests in Minneapolis. A white reporter also on the ground was not. https://t.co/GcfwEvyYQC pic.twitter.com/Mg4ZwKIuKt

In the complaint filed Thursday in the District of Minnesota, attorneys named state trooper Patrick Kelly and an unidentified individual described in the complaint as Jane Doe. Cooper, a retired Illinois State Police trooper, was 64 years old when law enforcement officers targeted him despite an executive emergency order issued my Minneapolis Mayor Jacob Frey exempting “members of the news media” from curfew requirements.

After finding two guns on Cooper, Kelly initially wrote in his report that charges include violating curfew and “carrying concealed weapon without permit,” but Crump said his client had a valid HR 218, which is a federal exemption from local and state prohibitions on carrying concealed firearms. “Ultimately, no charges were ever filed, and Mr. Cooper was forced to pursue the expungement process to prevent public access to the information pertaining to his humiliating and unlawful arrest,” attorneys said in the lawsuit.

Christopher O’Neal, an attorney with Crump’s firm, asked in the statement: “How many times will the country need to see this script play out, where a Black man is treated differently by police than other people in the same situation?”

“Mr. Cooper’s experience while simply working while Black is, unfortunately, all too common,” O’Neal added. “There must be justice for him and for all Black Americans who have had their basic civil rights violated and their dignity offended while going about their lives.”

RELATED: Police racism on display as one CNN crew arrested, another ‘treated much differently’ in Minnesota