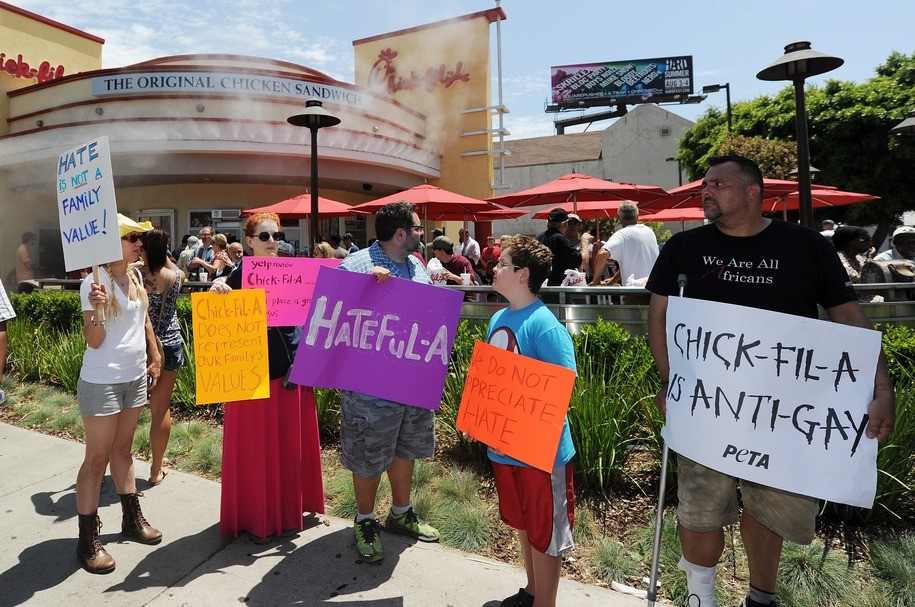 People on all sides of politics have varying opinions on boycotts—namely, whether or not they work and whether or not they’re worth someone’s time. Is an individual refusing to buy from a megacorporation really making a difference? What about people who have limited options due to location or budget? These are the questions that are hard to answer and reinforce the importance of accountability for corporations (and the wealthy people who run and profit from them). But the discussion is absolutely still worth having.

One company that some in the United States boycott is the fast food restaurant Chick-fil-A. Famously not open on Sundays, it’s perhaps not a surprise that the organization leans into a conservative Christian image. While the company has been telling customers for years that it’s stopped donating to anti-LGBTQ organizations, a report from The Daily Beast alleges that the CEO and chairman of Chick-fil-A, Dan Cathy, is actually a donor for the National Christian Charitable Foundation (NCF). Why does this matter? This group helps fund organizations working right now to prevent the Equality Act from becoming law.

Some background on Chick-fil-A donations: In 2011, boycott calls for the company made perhaps the biggest wave in national media as the foundation was caught having donated to organizations that promoted conversion therapy and opposed marriage equality. Cathy also expressed his anti-LGBTQ views on marriage equality while on a radio show in 2012.

So what’s the difference now, if anything? There is, technically speaking, a difference between a CEO (or owner, or so on) donating versus the charity or foundation of an organization donating. Technically. But at the end of the day, when profits are fueling anti-trans hate, discrimination, and exclusion, allies and advocates should be less hung up on the fine print and more focused on the big picture. As the Daily Beast covers, it’s also important to note that the NCF uses a donor-advised model, which means that donors recommend where funds are allocated, but do not have definitive power in how the funds are used once given.

Still, people on Twitter are not happy with the company.

i dont understand why people talk about how chick-fil-a tastes so good under every tweet saying it does homophobic shit, why are you flexing that you care about a sandwich more than human rights

When you buy from Chick-fil-A, you buy anti trans laws. Go somewhere else. https://t.co/Y4LzQ1Xln2

Stop eating at Chick-fil-A. Support a local business instead. One that won’t support anti trans laws. Got it? Good.

I’m trans & pan and I live in one of the states where they constantly push for anti trans laws as well as homophobic laws. Please this affects real people and real families Chick-fil-A is evil plain and simple. https://t.co/xA2U4QFwbr

If you eat at Chick-fil-A, you have to send twice what you spent to a trans person. That’s the rule sorry. https://t.co/JHmQIG1ucr

STOP EATING AT CHICK-FIL-A I’m a fucking shocked when I see people I know eating there. Yo, if you REALLY need a chicken sandwich that badly, there are so many other options. Better options even. Stop pretending that your $15 meal there ISN’T negatively impacting us. It is. https://t.co/NkpIf8Yt0N

i think it is worth noting that while some of the corporate pride bs is laughable or annoying, the people at chick-fil-a literally want us to burn in hell pic.twitter.com/aiHqr9yG5v

As LGBTQ Nation highlighted, it’s also worth pointing out that the Alliance Defending Freedom (ADF) is widely believed to be connected to the push of anti-trans legislations. You might remember that Daily Kos recently covered the Virginia elementary school teacher who was put on paid leave after speaking out against a trans-inclusive pronoun policy. His representation released a public statement with the teacher’s side of the story, referencing his religious beliefs as rationale for his refusal to abide by the school’s trans-affirming policy. Who is filing the lawsuit against the district? If you guessed the ADF, you’re right.

The ADF has filed suits in federal courts over trans-inclusive policies before, particularly in terms of schools allowing trans girls to participate in girls’ sports teams. As Daily Kos continues to cover, states are seeing an absolute flurry of anti-trans bills centered around school sports in spite of this subject being a nonissue in daily life. So why the push? As senior legal counsel for the Human Rights Campaign Kate Oakley told them in an interview, it’s important we don’t overlook the possible connection between the ADF and the push for these bills.

“While ADF wants to use transgender kids as their latest political scare tactic, state legislators should understand that their consistuents — including a large majority of Trump voters — believe transgender people should be allowed to live freely and openly,” Oakley told the outlet. “And that the only thing these bills will do is harm kids who are simply trying to navigate their adolescence.”

Oakley is, of course, correct. We already know that trans youth face distressing barriers and obstacles as it is—the last thing a marginalized group that reports higher rates of bullying, harassment, abuse, and even homelessness needs is to be legislated out of school sports.

Going back a few years but still related to trans rights, we also know that the number of anti-trans “bathroom bills” introduced across the nation read as eerily similar to a letter sent from the ADF. As reported by Mother Jones back in 2014, the ADF sent a letter to schools that opposed allowing trans students to use the bathroom that connected with their gender identity. Language in that bill rang in far too close for comfort to anti-trans bathroom proposals that later showed up in North Carolina, Nevada, and elsewhere. While federal judges have blocked the ADF’s attempts to overrule trans-inclusive bathroom policies in a number of states, the law firm just can’t seem to help itself from trying to legislate LGBTQ people out of existence.

Why does it matter if an organization with loads of money is pushing these legislations? Well, in addition to the bills themselves being deeply hateful and divisive, elected officials should be acting on behalf of constituents, not hate groups with money to burn. And yes, the Southern Poverty Law Center designates the ADF as a hate group. And for good reason.