Son of Jeb! launches campaign by boasting that he’s the only Bush who Donald Trump likes 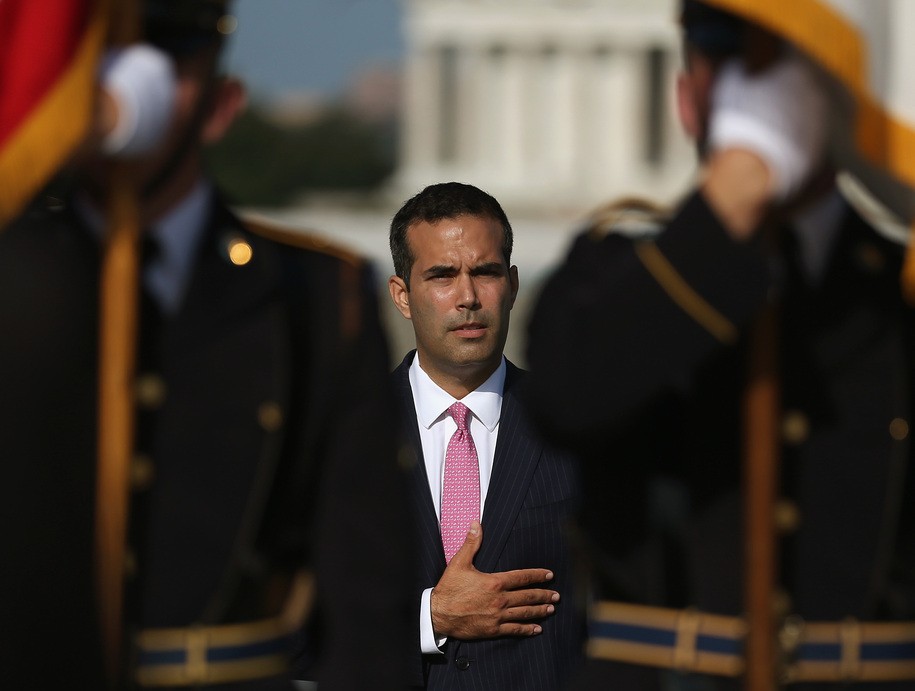 Did you know there’s another Bush politician? No, not warmongering party guy. Not warmongering scary CIA guy. Not the boring guy that Donald Trump used as a punching bag. It’s the son of Jeb and the grandson of George H.—it’s George P. Bush! The “P” stands for psycho-phant Prescott. George P. has announced he will run for Texas attorney general. He’s got a chance as the current attorney general in Texas is Ken Paxton, and unlike Ken Paxton, P. Bush has not yet been indicted for securities fraud.

But what else does a Bush need to run successfully in the Lone Star State? It used to be enough for granddaddy Bush to throw some money around, get some press, and tell Texans that having a Bush as an elected official meant good things for Texas. But times have changed, and MAGA Republicans have moved on to a new dynastic despot: Donald Trump. Donald Trump has said very nasty things about the Bush clan, hasn’t he? Oh yes, he has. In fact, George P. Bush’s own mother was the focus of one of Trump’s more racist attacks on Jeb, saying that the fact that she was of Mexican decent made Jeb soft on immigration. But it seems like George P. Bush has sufficiently kissed the orange-tanned sprayed ring of the Donald enough to feel confident in promoting some truly self-humiliating swag for his campaign.

George P. Bush surprised many by endorsing Trump’s 2016 election bid when many other establishment Republican refused to. While it shows the kind of honest sociopathy of the cravenly ambitious, P. Bush’s decision to support the man who said very unpolitical and shitty things about his father was only one step worse than the rest of the Republican Party, who correctly called Trump a terrible person only to turn around and follow him into a global health and economic crisis. Politico reported last week that Trump, while not endorsing anyone, has publicly referred to Prescott as “the only Bush who got it right.”

Watching Trump beat up on the Bush family, from matriarch Barbara Bush on down to Jeb and the Georges, was a guilty pleasure for many Americans during the 2015 Republican primaries. It was a pleasure because the Bush family is terrible. The decisions they’ve made in power have in no small part led to a world where three-quarters of Republicans believe in some truly depressing conspiracy theory concerning wealthy land-owning billionaires and their sex trafficking, while voting for a wealthy land-owning billionaire with nothing but sexual assault allegations against him.

Now, George W. should have been impeached for the Iraq war, something a 2013 Trump agreed with. But Trump’s more level political attacks are always mixed with his strangely personal attacks, and after her death the idea that Trump—a Republican—felt the need to tell the press that Barbara Bush was “nasty to him,” seemed … a little much. Then again, Trump’s buddy Roger Stone, in defending Donald Trump, wrote that Barbara Bush was “Nasty, rude, vindictive, entitled, self-important – that’s the woman I had several unpleasant encounters with.” If you aren’t following, Barbara is P. Bush’s grandmother.

Matthew Dowd, chief strategist for the 2004 Bush-Cheney presidential campaign, told CNN: “The Republican Party has become the party of Donald Trump … It just tells you a complete story of the Republican Party today that he would abandon his family in this regard and basically suck up to Donald Trump.” Saying Prescott had lost his “family values,” Dowd went on to say that P.’s abandonment of his family for political gain “really does tell a tale of the Republican Party — instead of candidates with principle leaving the party and saying I’m not part of that anymore, they stick it out and in order to stick it out they cozy up to Donald Trump no matter what they have to sacrifice, including family bonds and values.”

In reality’s defense, Dowd’s magical Republican Party never existed and the people he worked for are war criminals. George P. Bush, like incumbent attorney general Paxton, are both terrible people with no moral boundaries that power and money cannot move. Besides the indictments against him, people working alongside Paxton have asked for him to be investigated for corruption. Donald Trump’s camp has reportedly not yet said whether he will be able to get away from the ongoing federal investigations into his Trump Organization’s malfeasance to support Paxton or Bush.