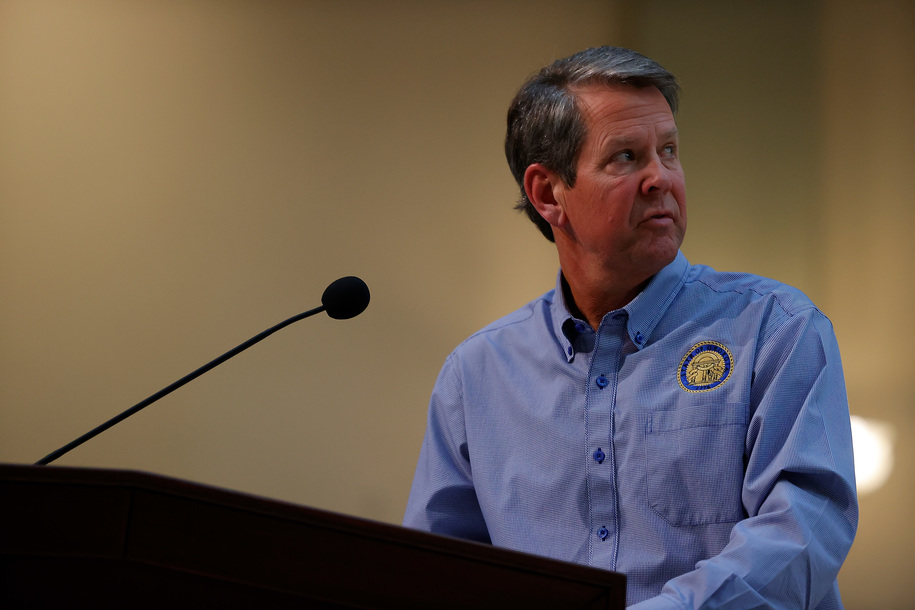 Ever since Gov. Brian Kemp allowed Donald Trump to go down in a haze of gory following the latter’s embarrassing loss in the once reliably red state of Georgia, he’s been persona non grata among a large faction of MAGAs.

Two county GOP parties voted to censure him over his refusal to overturn the legitimate election results, and his approval rating—particularly among Republicans—nosedived in the wake of the 2020 presidential election (though it’s ticked up since he reestablished his racist bona fides by signing Jim Crow 2.0).

But his improving approval ratings among the shitheels in his party was apparently not enough to prevent an astounding rejection from his state party.

.@BrianKempGA greeted at the Ga GOP convention with loud boos. He was speaking for about 30 seconds before it was quiet enough to hear him from the press area. But he got his first full applause when he mentioned Georgia being the first state to reopen during the pandemic. #gapol pic.twitter.com/4LcgRqkvoO

.@BrianKempGA greeted at the Ga GOP convention with loud boos. He was speaking for about 30 seconds before it was quiet enough to hear him from the press area. But he got his first full applause when he mentioned Georgia being the first state to reopen during the pandemic. #gapol

The Atlanta Journal-Constitution has more:

[I]t was a far cry from the hero’s welcome that Kemp, the state’s first lifelong Republican governor since Reconstruction, received at the last GOP meeting two years ago. At that gathering in Savannah, Kemp mocked “C-List celebrities” who threatened to boycott Georgia over the anti-abortion law, as an adoring crowd peppered him with ovations.

Nor was it an ideal reaction for a Republican seeking a unified base of support ahead of an expected rematch against Stacey Abrams, the Democrat he narrowly defeated in 2018. In a sign of the fractiousness within the party, many of the Kemp critics held signs supporting Vernon Jones, a recent GOP convert now trying to rebrand himself as a far-right conservative.

Even his Fetus Uber Allies shtick wasn’t enough to supplant his perceived treachery toward Trump in attendees’ minds:

“We passed heartbeat legislation,” Kemp said of the abortion law, which was blocked by the courts.

“Boo! What about the voting machines?” a man in the back of the room shouted in response.

Knowing Trump, Kemp will never be forgiven for his Original Sin. Which means his time in the Garden of Eden is over. Whether he can crawl out of the hole he’s dug for himself (by being marginally responsible and not shredding our democracy, mind you) remains to be seen.

But, hey, I love to watch Republicans eat their own. Maybe they can keep this up for another two years at least. Forever would be even better.