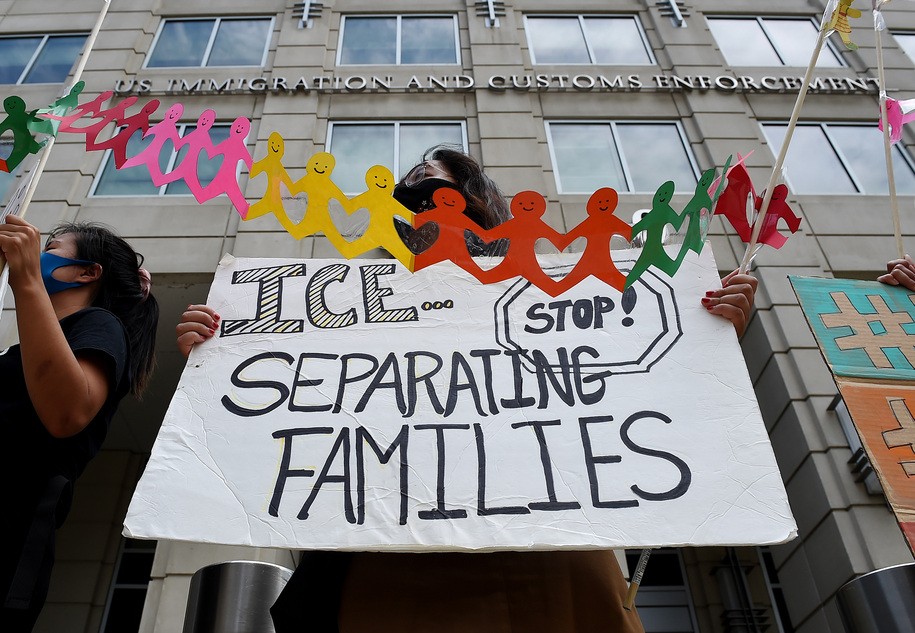 A leading immigrant rights advocacy group has filed a complaint on behalf of two women alleging unsafe, dangerous conditions while in custody of Immigration and Customs Enforcement (ICE) at an Indiana facility. They cite crowded conditions amid the novel coronavirus pandemic, guards who won’t wear masks, and insufficient soap to keep themselves safe. One of the women was tested for the virus while detained, but said that officials wouldn’t give her the result. She later found out through her attorney that she had tested positive.

“It is not right that the jail never told me I had COVID,” “Michelle” said in the complaint filed by the National Immigrant Justice Center (NIJC) with the Department of Homeland Security (DHS) Office for Civil Rights and Civil Liberties. “I believe I have a right to know about my own medical condition. It shouldn’t have taken my attorney to request medical records that took over a week to get for me to find out.” Michelle is a mom of four children. They are all in foster care following her ICE detention.

Other allegations regarding conditions at Clay County Justice Center in Indiana mirror claims made in several legal actions previously launched against the federal immigration agency over its despicable handling of the pandemic. Michelle said that Clay County failed to separate detainees who had tested positive for the virus or were showing symptoms from the general population, with no way for anyone to social distance. In one lawsuit last year for example, a detainee called social distancing “impossible.”

“They did not give us masks to wear around each other, not even the person who is positive for COVID is given a mask to wear,” Michelle said in the complaint. “And there is no way for us to social distance from each other. Some of the jail staff wear masks but some do not. And sometimes when the jail staff wear masks, they don’t cover their nose and mouth. It just hangs over their chin.” Detainees said that were provided with little in terms of hygienic items to try to protect themselves while in custody.

“The jail did not provide us with enough soap to wash our hands regularly,” “Maria” said in the complaint. She’s the mother of two U.S. citizens. Like in Michelle’s case, they’re also in foster care since her detention by ICE. “They just gave us little bars that you see in hotels or motels that only last a few days. So we had to buy our own soap from the commissary. They don’t let us have hand sanitizer because it has alcohol so soap is the only way we can keep our hands clean.” The jail, “which detains people for ICE under a contract with the U.S. Marshals Service, is one of 200 facilities ICE uses to detain people around the country,” NIJC said in a statement.

“In a report released in January 2021, researchers with the Physicians for Human Rights found that immigrants in ICE custody were denied access to even ‘the most basic COVID-19 prevention measures, such as soap for hand washing, and were retaliated against for raising safety concerns’ while the pandemic spread through numerous detention facilities,” NIJC continued in the complaint. “The report concluded that ICE created ‘unacceptable health risks and violated constitutional and human rights during the pandemic,’ which is ongoing.” As cases are again rising in ICE detention, ICE still has no national plan to vaccinate detainees.

Lisa Chun, a senior attorney with NIJC, said in the statement that the allegations made by the two women should be “a wake-up call for the administration to urgently release people to their communities, and dramatically scale down the abusive immigration detention system.” While DHS Secretary Alejandro Mayorkas has ordered the termination of two private contracts with two immigration detention sites that are currently under federal investigation, the Biden administration has requested funds for the next budget year to detain 30,000 immigrants, which is thousands more than the current population size. “These are not safe conditions, especially for people who have medical conditions,” Maria said in the complaint.

“The Biden administration continues to subject people to punitive ICE detention, where deadly conditions and medical neglect are rampant,” Chun said in the statement. “There is no good reason for Michelle or Maria to be detained in life-threatening conditions and separated from their children while their immigration cases proceed.”