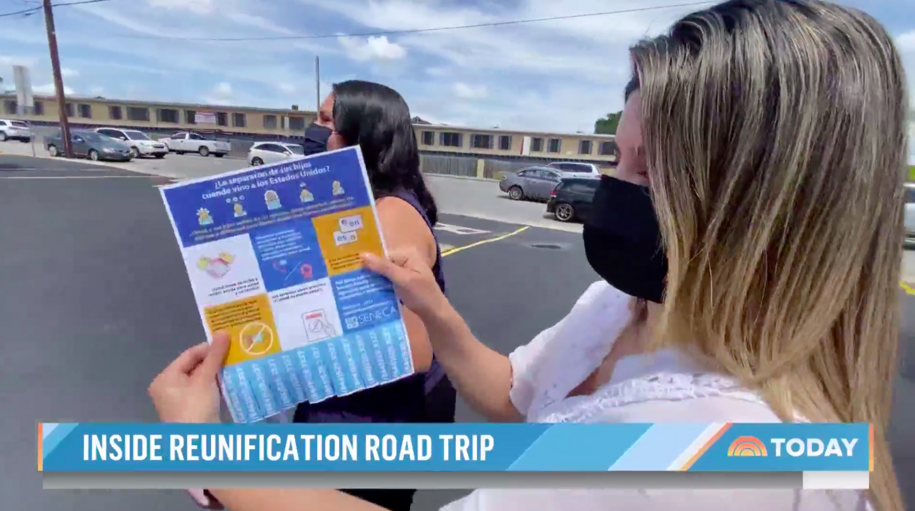 The nonprofit group tasked by a federal court with connecting asylum-seeking parents and children ripped apart at the southern border by the previous administration with free mental health services said it has reached over 1,000 families and counting, NBC News reports.

Due to the pandemic, Seneca Family of Agencies has had to do many searches virtually. But as widespread vaccine distribution has made it safer to have face-to-face contact, outreach workers have again been able to go door-to-door—sometimes “cross-country,” Jacob Soboroff reported—to connect families with resources. He followed along as outreach workers continued their search for another 200 families who haven’t yet been reached.

”At our first stop, a stroke of luck: The mother of a boy who was separated from his dad was home,” Soboroff reported. He says in a video that he stayed behind in the vehicle as two workers, Chandra Allen and Veronica Ledesmal, went to speak to the mother. They didn’t want to frighten anyone at home. Their efforts worked. “The woman told the outreach workers that she would be interested in the services they were offering,” he reports.

The mental health aid is the result of a “groundbreaking” court ruling that ordered the previous administration to provide families separated under its cruel, inhumane “zero tolerance” policy with mental health services. Government watchdog reports have found that officials with that administration had in fact ignored warnings from career staff about the traumatic effects of separation on children in particular.

Symptoms resulting from separations “are on a flyer that the team—and other colleagues elsewhere along their route—post anywhere they can, including markets and restaurants,” Soboroff said. “One lead can result in an entire family’s signing up for help.” Like the report notes, former White House aide and overall despicable shit Stephen Miller initially blocked a deal on mental health services. The court eventually forced the administration to pay, but advocates say Miller’s delay wasted precious time.

NEW: 2,100 families separated by Trump admin haven’t been reunited, according to Biden admin. Hundreds haven’t been located. We joined nonprofit @SenecaFOA on their cross-country search as they went door-door-door to find them and offer mental healthcare. pic.twitter.com/ft8axJESSB

Of course, reaching families is one thing but whether they accept the care is another, and many have not for a variety of reasons. According to the report, about 250 families so far have accepted care. Soboroff reported that the outreach workers he traveled with were able to contact over 30 families who hadn’t yet been reached.

Outreach workers then connected Soboroff with one family who’s already been accepting services through Seneca and was separated for more than 40 days in 2018. When asked why they wanted to share their story, dad Luis told Soboroff that “[w]hat happened to us was very hard. But because of the organizations and God, we are able to do better,” the report said.

A progress report submitted by the Biden administration’s family reunification task force this month says that more than 2,100 children stolen from their families by the previous administration from July 2017 through the beginning of 2021 may still separated from their parents, CBS News reported this month. According to the report, officials think a number of these families may have been reunited but can’t confirm it due to that administration’s sloppy record keeping.

“We would really have liked to see more progress by now but intend to make sure that the government picks up the pace,” American Civil Liberties Union lead attorney Lee Gelernt said in the report. “The president has called this a historic moral stain on the country and therefore, we believe the government needs to do whatever it takes to get these families reunited.”