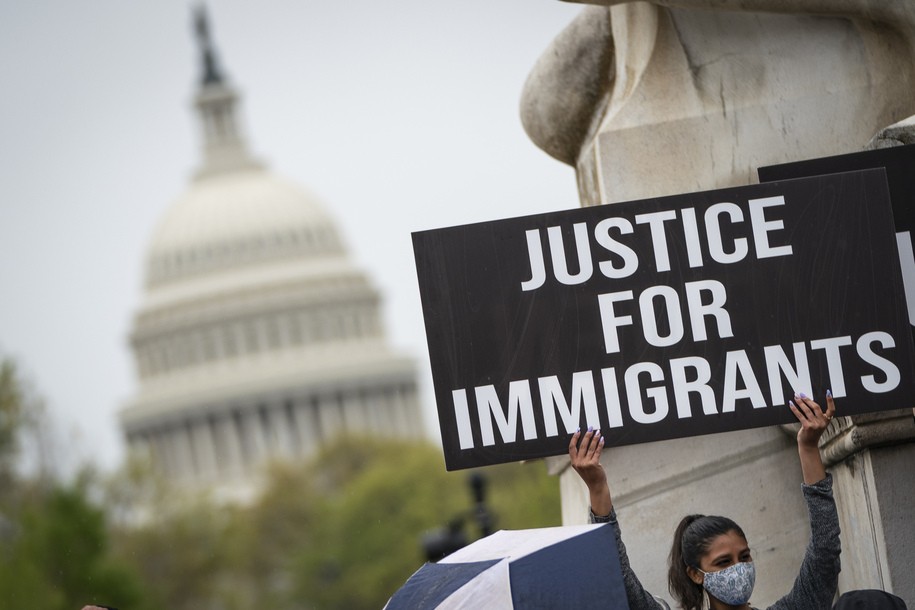 Temporary Protected Status (TPS) holders and their allies rallied in a number of U.S. cities on Thursday to call on federal lawmakers to enact a pathway to citizenship through the budget reconciliation process. This national day of action by members of the National TPS Alliance comes just days after a devastating, unanimous Supreme Court decision that stands to make it harder for immigrants to gain residency.

“We are gathered here just days after the Supreme Court ruled unanimously on Sanchez V. Mayorkas lawsuit, ruling that a grant for TPS does not count as a lawful admission into the United States,” TPS holder Concepcion Morales said at the Washington, D.C. rally. “This news was a huge blow for the TPS community, closing one of the only available avenues for our families to adjust their status, but this will not deter our struggle for obtaining green cards for all TPS holders.”

TPS Alliance said in a statement that Morales called on Congress to “counter this ruling by granting a permanent residency through any available legislative mechanism, including budget reconciliation.” TPS recipients and their allies in cities from Los Angeles to Hartford added their voices as well. “During this pandemic and before, we produced food in the fields, we cleaned the hospitals and the schools, we cared for the sick,” tweeted Connecticut’s Unidad Latina en Accion. “Exposed to the virus, the pesticides, and the exploitation, we essential workers deserve #ResidencyNOW.”

During this pandemic and before, we produced food in the fields, we cleaned the hospitals and the schools, we cared for the sick. Exposed to the virus, the pesticides, and the exploitation, we essential workers deserve #ResidencyNOW. #ImmigrantsAreEssential #Hartford #Connecticut pic.twitter.com/wUM4qpqeCa

“The court’s decision against our families will not deter our struggle, it only emphasizes the fact that congress must pass #ResidencyNOW” -Concepcion, TPS Holder, speaking outside Supreme Court pic.twitter.com/phO2QVGxhJ

Dozens of Senate Democrats this past February reintroduced legislation addressing TPS recipients, but it has been languishing there since. The SECURE Act would solidify of hundreds of thousands of families, many of whom have lived in the U.S. for years and have deep ties here, including a quarter of a million U.S. citizen children, jobs, and homes. The House the following month passed legislation by a bipartisan vote that protects TPS holders and certain other immigrants, but that legislation—the Dream and Promise Act—is also stuck in the Senate.

“We believe every avenue which can finally guarantee a permanent residency must be explored; whether it is through the American Dream & Promise Act (HR6), the elimination of the filibuster, and even including legalization provisions through budget reconciliation,” TPS holder Doris Landaverde said at the Hartford event. “Today, we call on President Biden, Senate Majority leader Chuck Schumer, and other congressional leaders to ensure that permanent protections for migrant families are included in the next budget bill.”

“What you see here are families, and the only thing we want is to be together,” opens up Doris Landaverde, @32BJSEIU member and #TPS activist. We belong in this country because #WeAreEssential! pic.twitter.com/o7DCFRm1Rl

We’re here at @SenBlumenthal‘s office because it’s time for Congress to follow his lead and provide permanent #ResidencyNOW for hundreds of thousands of TPS holders, and essential workers too #TPSJustice pic.twitter.com/2XzT2RzQhQ

This week, New York Sen. Kirsten Gillibrand released a statement affirming her support “for lawmakers to consider all options to create a pathway to citizenship” for TPS recipients, including using the budget reconciliation process. In her statement, Gillibrand warned that “[o]ur window of opportunity to pass meaningful comprehensive immigration reform is rapidly diminishing. Congress must act before we lose this unique chance to create a new framework that addresses long-term deficiencies and restores humanity and personal dignity to the process.

“Whether such reforms occur through bipartisan legislation or through other legislative vehicles including the budget reconciliation process, failure to pass meaningful comprehensive legislation that includes a pathway to citizenship is not an option,” Gillibrand continued in the statement. “I am committed to creating a fairer, more transparent and just immigration system that recognizes the dignity and promise of those who come here seeking a better life, and that will make our communities stronger.”