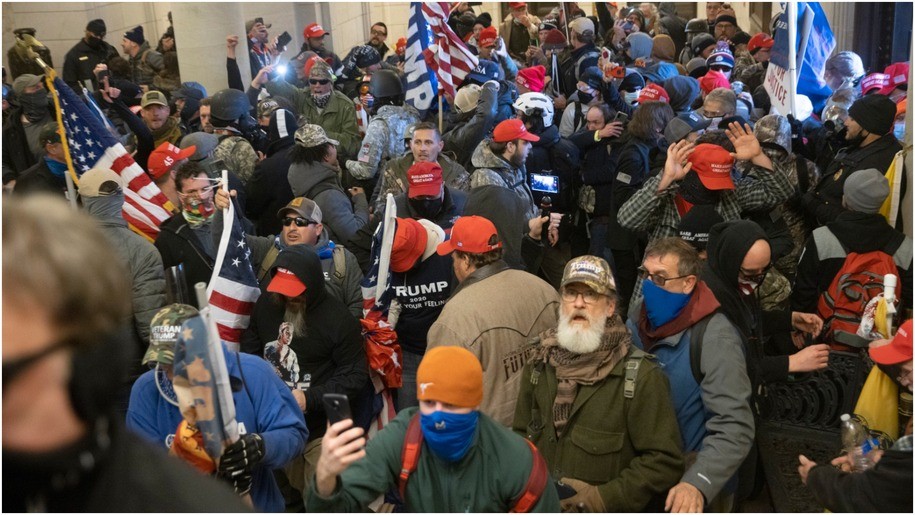 Donald Trump has ruined a lot of lives. Usually that’s a tragedy. But sometimes it careens mighty close to comedy.

Or they’re in jail, because they believed the most prolific liar in American history had an election stolen from him, and would have their six if they just stormed the Capitol to steal it back.

Maybe this dude should just get alleged multibillionaire Donald Trump to send him some Doan’s pills, instead of wailing to the blessed ether about his all-too-preventable fate.

A Kansas Proud Boy charged in the Capitol riot has asked a judge to release him from jail due to chronic back pain – a condition, prosecutors say, which didn’t prevent him from allegedly wielding an axe handle against police outside the Capitol.

William Chrestman, 47, was arrested in February along with four others connected to the Kansas City chapter of the Proud Boys. Photos from the Capitol riot appear to show Chrestman in tactical gear and a respirator and carrying a wooden axe handle. He faces multiple charges, including conspiracy, civil disorder and threatening to assault a federal law enforcement officer.

But … but … but … HE’S WHITE! He goes to backyard barbecues, church potlucks, and county fair truck pulls, and he doesn’t bash cops’ heads in at any of those events.

And did I mention he’s white?

Chrestman’s lawyers also maintain that Donald Trump ordered him unto the breach, King Henry-like, so he should get a mulligan.

“It is an astounding thing to imagine storming the United States Capitol with sticks and flags and bear spray, arrayed against armed and highly trained law enforcement,” his attorneys stated in a February filing. “Only someone who thought they had an official endorsement would even attempt such a thing. And a Proud Boy who had been paying attention would very much believe he did.”

Honestly, “Donald Trump told me to do it” is possibly the worst excuse ever. Maybe Chrestman should have convened a quorum of his brain parasites or checked in with Slenderman before he took that advice to the bank.

“Interestingly, the defendant’s back pain did not prevent him from storming the United States Capitol while armed with an axe handle, threatening law enforcement officers, and attempting to prevent Congressional proceedings, among other conduct,” stated Justice Department lawyers in their response.

Chrestman is also going all Simon Peter now that he’s in jail, denying his ocher overlord at least once … if not three times.

The Justice Department also argued against Chrestman’s attorneys’ attempt to paint him as someone peripheral to the alleged Proud Boys conspiracy related to January 6. Chrestman, the DOJ says, took an “active role in leading the co-defendants in his conspiracy and the crowd writ large in the attack on the Capitol.”

Peripheral? You mean the real insurrectionists brought axe handles with axe heads on them? Sure, dude. Enjoy the toilet gin. It goes great with shower-shoe vermouth.

Maybe, one day, white people (and I’m one of them) will understand that being white doesn’t automatically entitle one to legal immunity—even if you are taking your marching orders from your Aryan suzerain.