Video of Black woman being dragged by her hair in sports bar ignites protests in Washington, D.C. 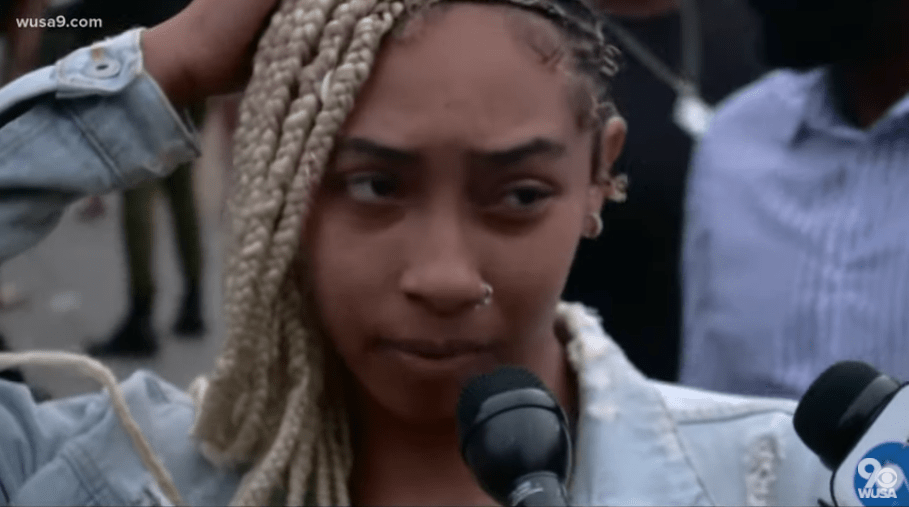 On Sunday evening, people gathered to protest outside of Nellie’s Sports Bar, a gay bar in Washington, D.C., after a disturbing video went viral that appeared to show a Black woman being dragged by her hair down the stairs. Dragged by whom? Allegedly, a member of the bar’s security team. It’s unknown what precisely led to the incident, but it’s deeply, inarguably unacceptable for someone to be removed from an establishment in this violent, demeaning fashion. Period. Keisha Young, a 22-year-old from Maryland, identified herself as the woman being dragged in the video.

“I want them gone,” she said during an interview with local outlet WUSA9 in reference to the bar, after being asked what she wants to happen next.

Young elaborated on her experience, saying, “It was an altercation in there … They were trying to get some other people out because somebody else brought a bottle in there. Somehow I got mixed up in an altercation because I look like somebody else … And I got hit and dragged down the steps.” She stressed she did “nothing wrong” and she remembers simply walking up the steps and then “being dragged right back down the steps.”

When asked what it was like to see the video of herself being dragged by the steps, she said, “It’s a little bit much.”

You can watch that interview below.

Keisha Young, 22, of Md., says she was the woman seen being dragged out of Nellies in that viral video on IG. When I asked her what should happen next, she said, “I want them gone”. (@wusa9) pic.twitter.com/ZkwxnSWZqU

“An apology is not going to get rid of the bruises on my body,” Young said in response to the statement issued by Nellie’s, as reported by local outlet WJLA. The same outlet reports that it contacted the Metropolitan Police Department and was told they received no service calls for Nellie’s related to the incident.

Some protesters marched to the home of the owner of Nellie’s, also located in the U street neighborhood, which you can see below.

How many MPD cops does it take to guard a home? Answer: About 50. Protesters voice concerns at home of Nellie’s owner. Protest have just left to continue march #JusticeforKeisha pic.twitter.com/KDIapycKO9

And here are videos and images from the protest, where people share why they’re showing up for the young woman in the video, and why it’s especially important during Pride Month.

“She was dragged like an animal” Protest outside Nellie’s bar after pulling Black woman down the stairs by her hair. #JusticeforKeisha #DCProtests pic.twitter.com/xBpHrjf25O

“We are asking ppl to protest and boycott Nellie’s Sports Bar because the owner doesn’t care about Black ppl” The fuller back story of what happened via @ItsNeeTay #JusticeforKeisha #DCProtests pic.twitter.com/rM7VtLBjKW

“We need to remember that Pride was a riot. The first Pride that we know of was a riot led by Black people and brown people.” – @PrestonMitchum, leading a protest against Nellie’s, a DC gay bar, after a Black woman was dragged out by her hairpic.twitter.com/EIKzBDrEof

“Out of the bar, into the streets!” When you’re walking home and come across this protest outside Nellie’s. As @JohnHenryWUSA is reporting, many are demonstrating after a video surfaced of a woman being dragged down a flight of stairs inside the business last night. @wusa9 pic.twitter.com/14RjeRPhzA

“Nellie’s has the audacity to have Black Lives Matter sign in their window. Nellie’s is racist AF” Protest outside Nellie’s Sports Bar after pulling Black woman down the stairs by her hair. #DCProtests pic.twitter.com/ljQzdLcDek

Nellie’s posted a statement to Facebook, saying: “We were incredibly upset and disturbed to see the unfortunate event that took place at Nellie’s last night. We are undergoing a full investigation of the situation. At Nellie’s we foster an inclusive and safe environment, so events like this are completely unacceptable to us.”

This incident is not the first time Nellie’s has had to issue an apology—you might remember that back in 2017, the popular sports bar apologized after displaying a “blue line” flag. The establishment removed the flag, but people—and especially people of color—have not forgotten.

You can watch coverage of the protest, and the interview with Young, below.

And lastly, you can view the video of the incident below. As a warning, the violence is graphic and may be disturbing to viewers.