‘A fact-checking nightmare’: Trump says he’s working on a book, but publishers are not lining up 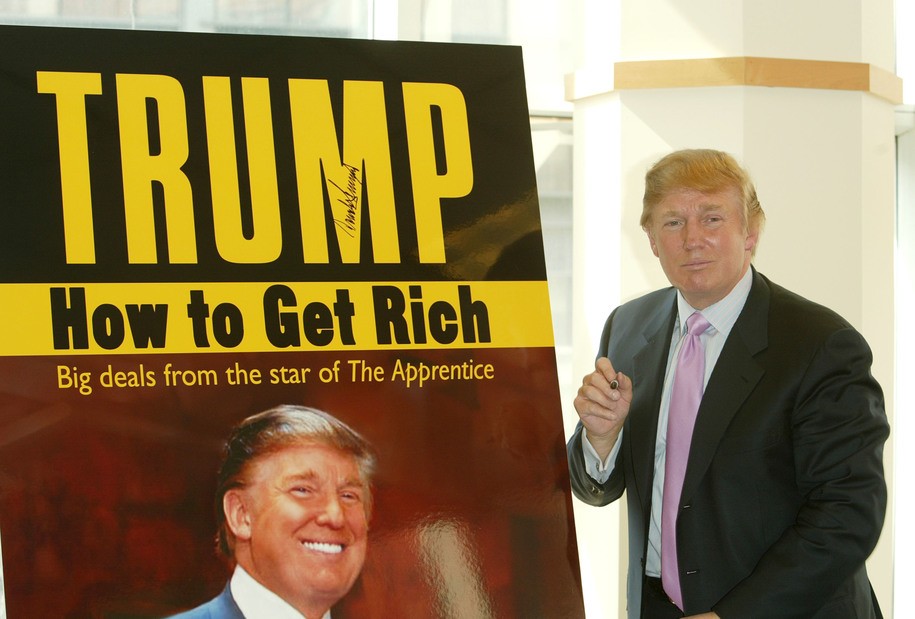 Donald Trump doesn’t read. Donald Trump doesn’t write. Donald Trump is little more than an undifferentiated wad of protoplasm that converts trans fats into lies. So when I saw that he’d claimed he was working hard on a book, I had to laugh. This guy wouldn’t have the attention span to complete the maze on a Denny’s placemat, even if you let him draw his own exit with a Sharpie.

This isn’t me saying that. It’s the ghostwriter for Trump’s original magnum dope-us, The Art of the Deal.

In July 2016, Tony Schwartz, the actual author of The Art of the Deal, spoke with the New Yorker in an attempt to warn Americans about the roiling sea of pathologies and squid piss they were thinking about electing president. (Obviously, the warning fell on deaf—and very dumb—ears.)

Schwartz believes that Trump’s short attention span has left him with “a stunning level of superficial knowledge and plain ignorance.” He said, “That’s why he so prefers TV as his first news source—information comes in easily digestible sound bites.” He added, “I seriously doubt that Trump has ever read a book straight through in his adult life.” During the eighteen months that he observed Trump, Schwartz said, he never saw a book on Trump’s desk, or elsewhere in his office, or in his apartment.

And if he hasn’t read a book in his life, it stands to reason that he’s never actually written one. In fact, Schwartz insisted he wrote every word of The Art of the Deal, and his publisher backed him up:

In my phone interview with Trump, he initially said of Schwartz, “Tony was very good. He was the co-author.” But he dismissed Schwartz’s account of the writing process. “He didn’t write the book,” Trump told me. “I wrote the book. I wrote the book. It was my book. And it was a No. 1 best-seller, and one of the best-selling business books of all time. Some say it was the best-selling business book ever.” (It is not.) Howard Kaminsky, the former Random House head, laughed and said, “Trump didn’t write a postcard for us!”

So there’s no fucking way Trump is actually writing a book; as it turns out, there’s also no fucking way a major publisher is interested in this nonexistent book, as Trump is claiming.

How do we know that? It’s precisely what major publishers—who prefer not to give walking libel lawsuits book deals—are saying.

Almost five months after leaving office, major publishing houses still are wary of publishing a book by former President Donald Trump, even though a post-White House memoir would almost assuredly be a best-seller.

Their reluctance is driven by several factors, though the underlying fear is that whatever Trump would write wouldn’t be truthful.

Noooooooooo! Come on, now. You mean the guy who insists he won the election and has been telling people he’ll be back in office by August can’t be trusted to tell the truth? You don’t say.

One top industry insider told Politico that any Trump book would almost certainly be unpublishable: “[I]t would be too hard to get a book that was factually accurate, actually. That would be the problem. If he can’t even admit that he lost the election, then how do you publish that?”

Of course, those statements don’t exactly comport with Trump’s own reports about his recent book-writing pursuits. In a recent statement on his basic-blog-turned-even-more-basic-website, Trump wrote this:

“I turned down two book deals, from the most unlikely of publishers, in that I do not want to do such a deal right now. I’m writing like crazy anyway, however, and when the time comes, you’ll see the book of all books. Actually, I’ve been working on a much more important project right now!”

I’d really love to parse what “most unlikely of publishers” actually means, though I know it almost certainly means they’re “unlikely” in the same sense that Jared Fogle’s children’s book deal is unlikely.

As in, it’s very unlikely that they exist. But that doesn’t mean Trump won’t keep doing what he does best—pretending:

Trump didn’t reveal who the two publishers were. But in a statement on Monday afternoon to POLITICO, he insisted that “two of the biggest and most prestigious publishing houses have made very substantial offers which I have rejected. That doesn’t mean I won’t accept them sometime in the future, as I have started writing the book,” the statement read. “If my book will be the biggest of them all, and with 39 books written or being written about me, does anybody really believe that they are above making a lot of money? Some of the biggest sleezebags [sic] on earth run these companies.”

I’ve published a few books, both through publishers and on my own. To be honest, I don’t know all that much about the industry, but one helpful tip I can impart is this: “When you’re shopping a book to potential publishers, don’t call them sleazebags, and if you do, don’t misspell it. It sort of undermines your appeal.”

Meanwhile, Politico collected several statements from people in the publishing industry who were skeptical about Trump’s bilious boasts. The outlet also reached out to bigwigs at the “Big Five” publishing houses—Penguin Random House, Hachette Book Group, HarperCollins, Macmillan Publishers, and Simon & Schuster—to see if they knew anything about Trump’s big book offers. They said they hadn’t, and furthermore, most stated that they wouldn’t go anywhere near a Trump book project.

One book industry insider, Keith Urbahn, president of the literary agency Javelin, said, “Any editor bold enough to acquire the Trump memoir is looking at a fact-checking nightmare, an exodus of other authors, and a staff uprising in the unlikely event they strike a deal with the former president.”

Others were a bit snarkier. One anonymous source stated, “It’s likely that a few unlikely people did approach him! But that could be, like, a publisher in Zimbabwe.”

Another said, “I’m skeptical. He’s screwed over so many publishers that before he ran for president none of the big 5 would work with [him] anymore.”

Of course, it’s likely that Trump is simply upset that Mike Pence—who refused to overturn the 2020 election to reinstall himself and Trump, and then had the temerity not to be hanged in front of the Capitol—has inked his own book deal. Remember, Trump is the guy who announced—falsely—that he’d be throwing out the first pitch at a Yankees game. His—again, false—declaration came just an hour before Dr. Anthony Fauci threw out a pitch at a Washington Nationals game. So the guy can’t stand not to be the focus of whatever’s happening.

Of course, all of this speaks volumes about the narcissism of a man who, by most accounts, takes the same jaundiced view toward literature as he does toward leafy cruciferous vegetables. He couldn’t care less about books, but he nevertheless wants the world to see him as a great author.

Hmm. Come to think of it, that’s kind of the same attitude he took toward politics, eh?