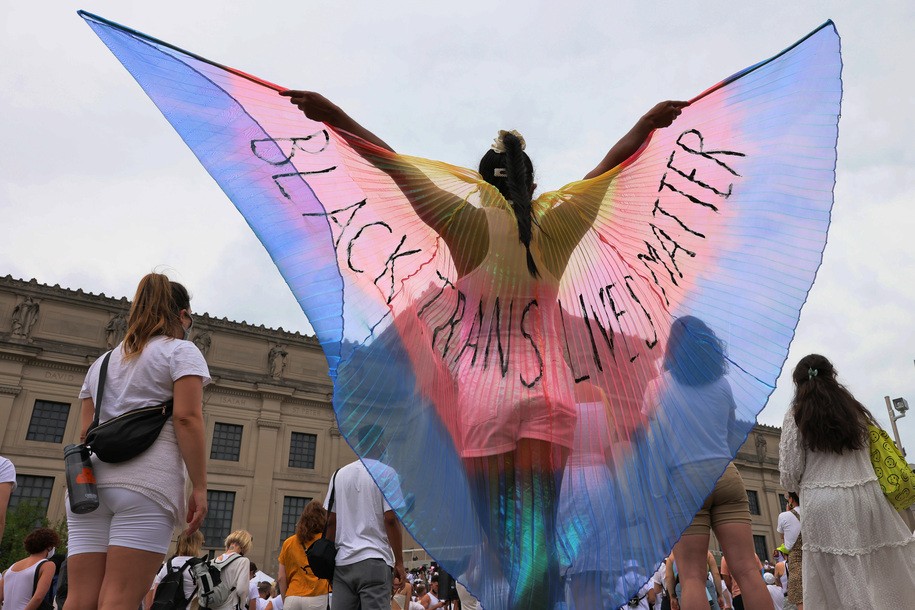 Several thousand people gathered in Brooklyn, New York, to march in solidarity with and for Black trans youth over the weekend. This action would always be inspiring, important, and necessary, but especially so given the number of anti-trans bills Republicans have slung out amid the pandemic; and the number Republican governors have signed into law in recent months. People participating in the Brooklyn Liberation march met in front of the Brooklyn Museum for a rally at noon on June 13, where 22-year-old Mx. Avory told the crowd the group was here to “claim space” and “here to say that we have a right not just to survive, but to thrive; to demand that our movements show up and center us,” as reported by The New York Times.

So, how did this event come to be and what inspired it? Co-organizer Eliel Cruz told the publication them that the group didn’t work with the police or seek a permit for the march. “We are going to be setting up guerilla-style,” Cruz told the publication. “We just want people to know we are purposefully trying to create some type of disruption in order for people to pay attention to what’s happening.” And what’s happening, again, goes back to the ongoing epidemic of violence against trans folks (including trans youth) that happens on every level.

In a statement posted to the group’s website before the march, it’s clear the focus of this year’s protest was going to be on trans youth, and especially, trans youth of color. The statement reads in part: “Dreams are being taken away from trans youth. Let kids play. Everyone deserves agency, bodily autonomy, health care, and self determination. Trans health care saves lives. Let kids speak. Trans youth are who they say they are. Trans youth know their truth.”

Cruz shared the same sentiment, explaining that the protest hoped to bring attention to the slew of anti-trans legislation across the nation. As Daily Kos has covered, trans folks—and especially trans youth—are being attacked in terms of health care, participation in school sports, and even in terms of birth certificate updates. In speaking to them, Cruz stressed that organizers were trying to “center trans youth as much as possible,” adding that, “We do not believe there’s enough attention to the ongoing attacks against trans youth, but also the epidemic of violence against trans women of color, particularly Black trans women.”

In speaking to the Times, Schuyler Bailar, a queer Korean American trans man of color, who competed on a Division 1 college swim team as an openly trans man, expressed the belief that trans youth “absolutely” deserve to play sports just as he was able to. Bailar added, “Trans kids deserve that space.”

Here are some moving photos, videos, and thoughts from those who attended the 2021 protest.

Great running into some friends (@bradlander + @elisacresponyc) at the Brooklyn Liberation march this afternoon. Nice to see our next Comptroller showing up and standing in solidarity with our Black Queer and Trans siblings! PROTECT TRANS YOUTH! pic.twitter.com/xwnrs9zTUP

The Brooklyn Liberation March was just as beautiful and moving and joyful as it was last year #protecttransyouth pic.twitter.com/1KeuLjex7a

accidentally ended up at #BrooklynLiberation yesterday and it was such a moving experience. grateful to been in proximity to all this glorious powerful energy pic.twitter.com/arq0niWkBd

The turnout today was beautiful. This is probably only half the March. pic.twitter.com/KdZpuJqyDi

Waiting for the adrenaline to be replaced by white claw so that I can weep at how beautiful today’s @brooklynlib action for Trans Youth march was.I don’t have the words. My love to Brooklyn Liberation & my frontline family.And reverence to Trans Youth Leaders.#ProtectTransYouth pic.twitter.com/12PjHXZoEB

(1/2) Thousands March through Downtown Brooklyn for the Black trans liberation/protect trans youth march, which marks its second year after being the single largest-attended NYC protest last summer. Organizers called on participants to wear white, marking a time of crisis for… pic.twitter.com/eu7368wTSE

Sending EVERYONE at Brooklyn Liberation March LOVE. Trans community & youth around the globe will always have my support no matter the space, time & distance between us.THANK YOU to the organizers for these important,meaningful events. 🏳️‍🌈🏳️‍⚧️✊🏽♥️#ProtectTransYouth#TransYouthPower https://t.co/oLPPiYIKUZ

“Trans youth are specifically targeted and have been shoved to the side,” Zephyr Merkur Herrera, a trans advocate, told The Daily Beast. Sadly, they are more than right. And it’s up to all of us to speak up and try our best to stop it.