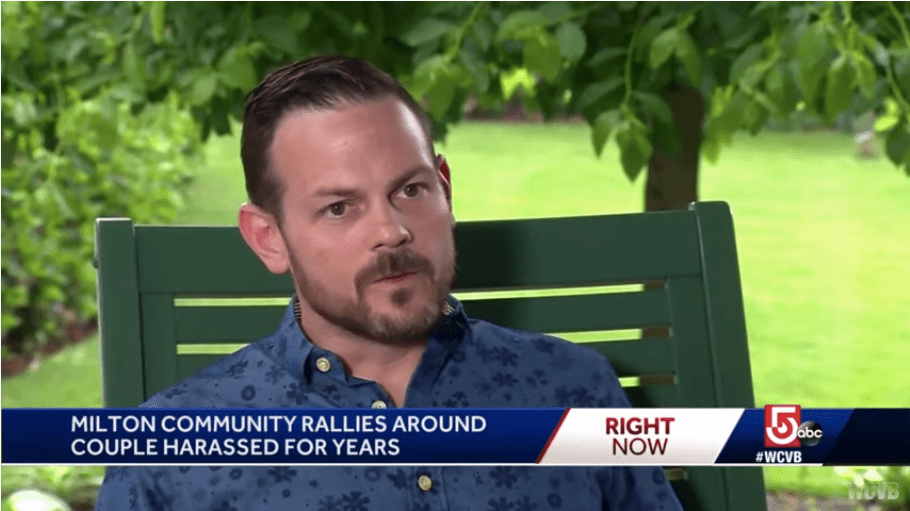 Anti-LGBTQ discrimination and harassment can occur on a number of levels. As most think of right away, bullying and teasing can occur between kids and teenagers while in school. Oppression can come down from the federal and state level, too, as we’re seeing with the recent slew of anti-trans legislation cropping up around the nation. People may also experience queerphobia from coworkers, family members, and even friends. And, as one same-sex couple in Massachusetts reports, even from neighbors who tried to keep their hate anonymous.

LeeMichael McLean and Bryan Furze, a same-sex couple living in Milton, Massachusetts, received magazines, newspapers, and other mail addressed to their home with homophobic names on them, as reported by The Boston Globe. This lasted about five years, and the Milton police were unable to help, as the perpetrator didn’t use a credit card that could be traced back to them. What finally solved the mystery? Handwriting analysis and the work of a local good Samaritan.

Here’s how it went down. Though the subscriptions ended briefly amid the pandemic, the perpetrator signed the couple up for a subscription to the Globe under the name “Michelle Fruitzey.” What the perpetrator didn’t know, apparently, was that the couple already subscribed to the Globe, and thus the paper sent the order request back to their address. Because the subscription request was handwritten, the couple was eventually able to match the handwriting against town election records—but not without a little community support.

McLean shared the couple’s story on Facebook and attached a photo of the subscription card. One neighbor submitted a Freedom of Information Act request to access election records for the town. From there, they tried to match the handwriting to what was on the subscription request.

The match? A neighbor of the couple’s, who they said had always been friendly to them in person. The neighbor, who lived just two doors away from the family, served with the couple on the Town Meeting council. Detectives questioned the neighbor and he confessed. He had not been publicly identified at the time of writing.

“I think serving was what caused the problem – if you want to call it a problem,” McLean explained to local station Milton Access TV in an interview. He noted they didn’t know exactly when the subscriptions began appearing, but they knew they had been speaking at the Town Meeting podium often and had become “very visible very quickly.” McLean told the outlet: “We long suspected that was the reason somebody was harassing us.”

Furze said they never experienced outward hostility from the neighbor, but the resident apparently told police he was motivated by the couple’s “outspokenness” and opinions about the town’s future. “I have some doubts about that,” Furze added, according to the Globe.

McLean has stressed the situation was upsetting because it felt there was no end in sight, and they didn’t know if the harassment would advance “to something more.” He added that “it was an annoyance because I had to follow up on all of them.” Local outlet WCVB reports the couple also had to pay for these unwanted subscriptions.

As reported by Yahoo News, police are now seeking a criminal harassment charge against the neighbor in Quincy district court.

You can check out an interview with the couple below.