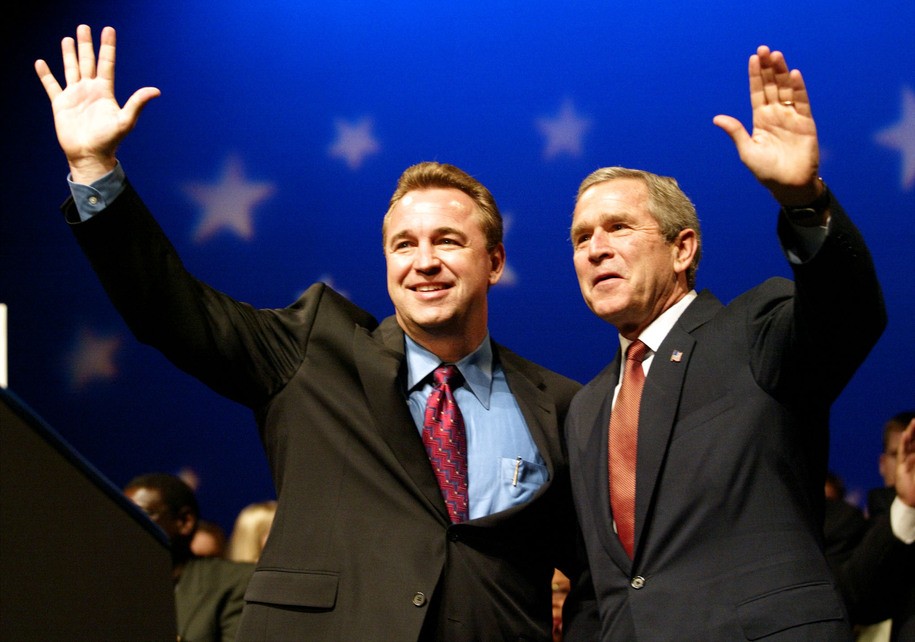 Former Rep. Matt Salmon announced Wednesday that he would seek the Republican nomination for governor of Arizona, the office he narrowly lost back in 2002. Salmon, who was a big headache for party leaders during his two stints in the House, quickly earned an endorsement from a likeminded organization, the radical anti-tax Club for Growth.

Salmon, who got his start in the state Senate, was first elected to Congress in the 1994 GOP wave when he flipped an open Democratic-held seat, but he soon became one of Speaker Newt Gingrich’s loudest intra-party foes. Salmon, who pledged to serve just three terms, was disgusted after Gingrich and his allies ensured that a term limits bill wouldn’t pass, and he later recounted, “I decided all bets were off. If he can speak his mind, I can speak mine.” The Arizona congressman very much didn’t keep quiet over the following years, and he was one of several fiscal ultra-conservatives willing to vote against the leadership even on important bills.

Salmon called for Gingrich to step aside in early 1997 due to an ethics investigation, and he also took part in that year’s coup attempt against the speaker. That effort crashed and burned, but Salmon had considerably more success in 1998 after the GOP unexpectedly lost seats in the midterm elections. Salmon took to Larry King Live days later to announce he had enough votes to keep Gingrich from being named speaker again: party leaders agreed he wasn’t bluffing, and Gingrich soon resigned from Congress.

Salmon, unlike most of his colleagues, adhered to his term limits pledge and retired in 2000 before becoming a lobbyist, but he was hardly done with politics. Salmon, a devout Mormon who remained popular with social conservatives, decisively won the 2002 primary for governor ahead of a tough general election with the Democratic nominee, Attorney General Janet Napolitano. The state was in bad financial shape at the time, and while Salmon insisted he’d represent needed change from termed-out GOP Gov. Jane Hull, Napolitano argued that the problem lay with 12 years of Republican leadership.

Reporters ended up dubbing the contest as the “tightest and ugliest race for governor in memory.” Napolitano declared that Salmon’s votes in the state Senate against education funding were partially to blame for the bad condition of the state’s schools, and she portrayed the former congressman as too conservative. Salmon’s allies, meanwhile, argued that Napolitano had done a poor job protecting victims while she was U.S. attorney.

Ultimately, Napolitano edged out Salmon 46-45, while 7% went to former Secretary of State Dick Mahoney, a Democrat-turned-independent who viciously attacked both his main rivals. Salmon actually managed to carry Phoenix’s Maricopa County 48-45, which makes him one of the very few candidates in recent memory to win this very populous county while losing statewide.

Salmon went on to lead the state party and returned to lobbying, a career that included work heading the now-defunct Electronic Cigarette Association, but he had yet another campaign in him. In 2012, he campaigned for the open 5th Congressional District, a safely red seat based in Mesa and Gilbert, and beat state House Speaker Kirk Adams 52-48 in the primary. Salmon made news the next year when he reaffirmed his opposition to same-sex marriage even though his son was gay.

And while the congressman said he wouldn’t adhere to any term limits rules “until everybody else does,” he did pick right where he left off in the 1990s by making himself a nuisance to his leadership. Salmon was one of the founding members of the House Freedom Caucus, a nihilistic cohort that made trouble for Speaker John Boehner.

Salmon supported Boehner at the last moment in the 2013 speakership vote and reluctantly backed him again in 2015, but he expressed his hope later in the year that internal fights “may even result in a change in some of our leadership.” He got his wish as Boehner resigned from Congress, though Salmon uncharacteristically ended up voting for Paul Ryan to replace him.

Salmon also spent part of that year considering a primary challenge against John McCain, but he instead shocked everyone in February of 2016 when he revealed that he wouldn’t be running for anything. Well, almost everyone: State Senate President Andy Biggs immediately announced that he’d campaign for his now-open seat, and Salmon wasted zero time endorsing him. Biggs narrowly won the primary and established as one of the far-right’s most ardent allies on Capitol Hill.

Salmon is now back once again to try and capture the office that eluded him almost two decades ago, but he’s no sure bet to win the nomination to succeed termed-out GOP Gov. Doug Ducey. Salmon faces primary opposition from state Treasurer Kimberly Yee; Board of Regents member Karrin Taylor Robson; and Kari Lake, a former TV anchor who has recently taken to spreading far-right conspiracy theories. The Democrats are fielding Secretary of State Katie Hobbs and former homeland security official Marco López.