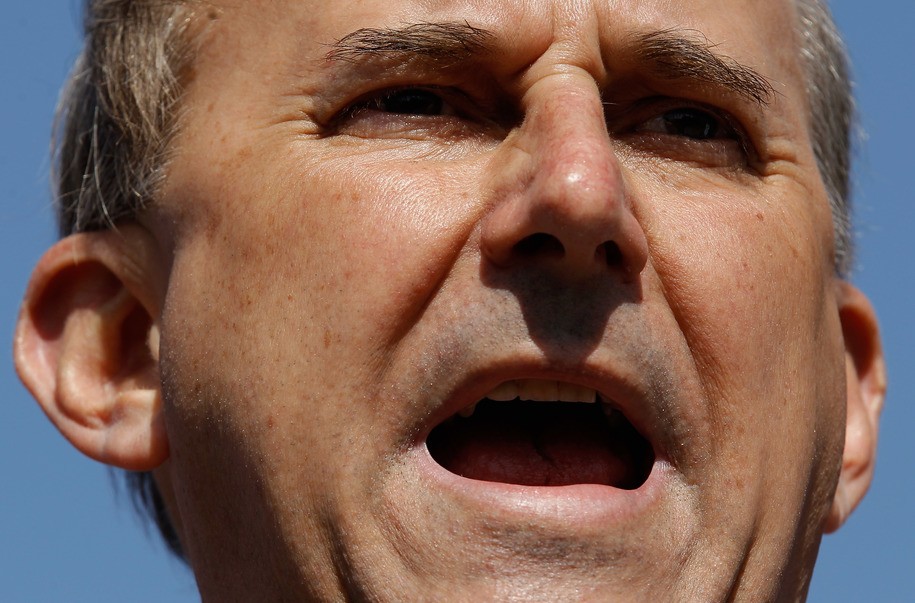 It’s not all that hard to influence Rep. Louie Gohmert. He’ll believe just about anything you tell him, so long as it’s outlandish, false, and simple enough for a 3-year-old child—or dog, or dining room table—to understand.

I’m guessing the number of Nigerian princes he’s helped out over the years approaches a baker’s dozen. I honestly don’t know what’s wrong with him, but I have not yet ruled out “Pez dispenser stubbornly lodged in the folds of his prefrontal cortex”—though I assume Gohmert’s gormlessness boils down to more quotidian pathologies, like an overweening fondness for Fox News. (If I thought he was smart enough to remove the caps from his Sharpies before sniffing them, I’d chalk it up to that—but my confidence in the man is not high.)

So, yeah, ol’ Gohmert Pyle is spouting nonsense again—nonsense that almost certainly came to his attention via the firehose of misinformation that is Fox News.

Tucker Carlson, who’s going out of his way to kill as many people as he possibly can these days, is also floating outlandish theories—embroidered with a papery “just asking questions” fig leaf made of MyPillow filling discards—in a transparent ploy to divert attention from the scores of Trumpaloompas who besieged the U.S. Capitol on Jan. 6.

You see, it wasn’t necessarily Trump supporters who planned and carried out the insurrection. It may have been FBI agents! No, really!

Why are you laughing?!

Carlson’s theory is essentially that the presence of unindicted co-conspirators in the Capitol riot indictments means those people are government agents and that this, in turn, means the FBI was involved in organizing the riot. The idea has since caught on with conspiratorially minded congressional Republicans.

Hmm, unindicted co-conspirators? Well, if they weren’t indicted, that could mean they’re being protected! Which means they’re probably FBI agents! If that logic fails to impress you, congrats. You and Louie Gohmert still share a common ancestor, but it’s probably a lot more gibbon-like than you could ever imagine.

Here’s the gist of Carlson’s “argument,” with a partial transcript:

Tucker Carlson’s latest take on the Jan. 6th attack on the capitol is that it was actually an FBI false flag pic.twitter.com/s87r1eQYSU

“But wait, here’s the interesting thing: Person Two and Person Three were organizers of the riot. The government knows who they are, but the government has not charged them. Why is that? You know why: They were almost certainly working for the FBI. So, FBI operatives were organizing the attack on the Capitol on Jan. 6, according to government documents.
“And those two are not alone. In all, Revolver News reported there are, quote, ‘upwards of 20 unindicted co-conspirators in the Oath Keeper indictments, all playing various roles in the conspiracy who have not been charged for virtually the exact same activities, and in some cases, much, much more severe activities as those named alongside them in the indictments.’ Huh? So it turns out that this ‘white supremacist’ insurrection was, again by the government’s own admission in these documents, organized at least in part by government agents.”

Uh, no, Tucker. None of that is true. And you could have figured that out yourself with just a smidge of workaday journa-lamism.

“There are many reasons why an indictment would reference unindicted co-conspirators, but their status as FBI agents is not one of them,” said Jens David Ohlin, a criminal law professor at Cornell Law School.

Added Lisa Kern Griffin of Duke University Law School: “Undercover officers and informants can’t be ‘co-conspirators’ for the purposes of establishing an agreement to violate the law, because they are only pretending to agree to do so. … An unindicted co-conspirator has committed the crime of conspiracy, and investigative agents doing their jobs undercover are not committing crimes.”

Wait, what? The theory Carlson is floating is literally impossible? I guess that means his credibility is completely shot and Fox News will fire him ASAP. Whew! Glad we don’t have to deal with the frozen halibut king much longer.

So Carlson did his job. By “just asking questions,” he was able to inject some gooey nougat into the American political bloodstream, and it promptly got stuck in one of Rep. Gohmert’s more sclerotic brain arteries.

Louie Gohmert: So if there were federal agents involved on January 6th, we really need to know what the FBI knew and when they knew it… pic.twitter.com/OrKYwbFPza

Gee, maybe we do need to get to the bottom of this. How about establishing a bipartisan Jan. 6 commission? If we did that, we could finally answer these all these vexing questions!

Of course, Republicans have learned that it takes scarcely a whiff of truth to galvanize their base—which has decided en masse that unicorn farts and fairy wishes are the new lingua franca of the diverse MAGA constituencies (i.e., poor clueless working people and the plutocrats who disdain them). Tucker Carlson does a bit of his shtick and the dumbfucks across the aisle all line up to parrot it.

What can we do about it, other than hold up Gohmert Pyle as being sadly emblematic of the modern-day Republican Party? Well, there’s not much we can do about Carlson, who becomes a bigger cash cow for Fox with every contemptible lie he spews.

No, what we need to do is start planning early for 2022, when we have a chance to marginalize these nutters and set the country on a more sane course. If we don’t, prepare for a Congress with an even goofier gang of Gohmerts.

Seriously, just think about that for a second. And then think—for far more than a second—about what we can do to prevent it.