Citizenship for undocumented immigrants would boost economy and increase wages for all, report shows 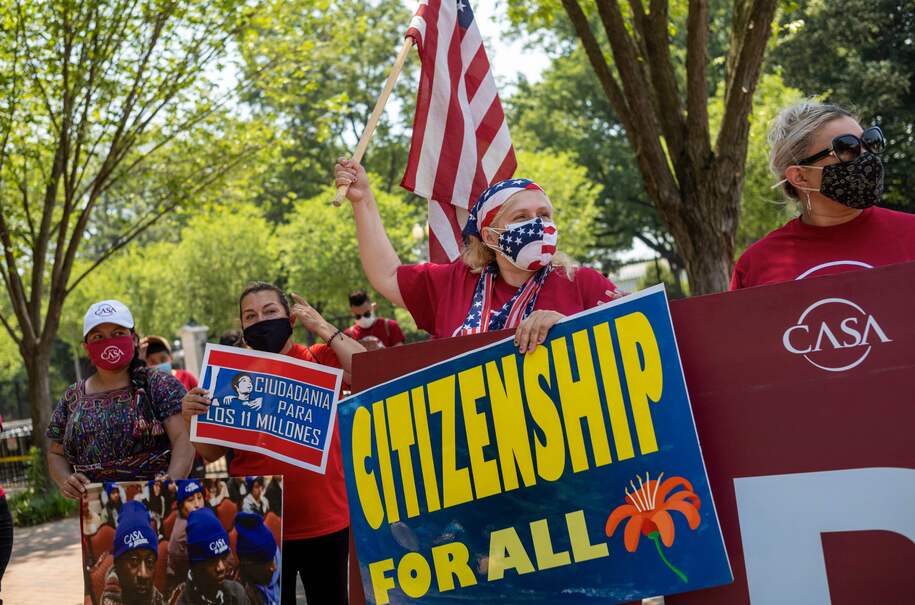 Putting the nation’s undocumented immigrants on a pathway to citizenship would provide a massive boost to the nation’s economy, increasing the gross domestic product by up to $1.7 trillion over the next decade and creating over 430,000 jobs, the Center for American Progress and the University of California, Davis’ Global Migration Center said in new findings released this week.

”Poll after poll has illustrated that the vast majority of Americans support putting undocumented immigrants on a pathway to citizenship,” the report said. “And as the nation emerges from the COVID-19 pandemic and looks toward the future, legalization is a key component of a just, equitable, and robust recovery.” While the U.S. Citizenship Act of 2021 would provide the most robust recovery, more targeted immigration bills would also provide significant economic benefits.

Enacting the Dream and Promise Act, which puts Deferred Action for Childhood Arrivals and Temporary Protected Status holders onto a pathway to citizenship, “would increase U.S. GDP by a cumulative total of $799 billion over 10 years and create 285,400 new jobs,” researchers said. “Five years after implementation, those eligible would experience annual wages that are $4,300 higher. Ten years after implementation, those annual wages would be $16,800 higher, and all other American workers would see their annual wages increase by $400.”

Legislators and advocates have also pushed for legislation that would permanently protect undocumented essential workers, including farmworkers (both the Farm Workforce Modernization Act and Dream and Promise Act passed the House in March). Researchers said that a pathway to citizenship for Dream and Promise-eligible immigrants and essential immigrant workers “would boost the GDP by a cumulative total of $1.5 trillion over 10 years and create 400,800 new jobs.

“Importantly, this analysis considers only these direct economic benefits,” researchers continued. “The model does not capture the potentially large additional benefits to eligible immigrants’ children in education, health, and future productivity gains, as these effects would take place likely more than 10 years from implementation.”

What’s impossible to calculate is the peace of mind that would come from having the threat of deportation lifted from over families’ heads, especially after the years of attacks the DACA program has endured.

A pathway to citizenship for undocumented immigrants living and working in the U.S. would add up to $1.7 trillion to the nation’s GDP over 10 years and create nearly 440k jobs. pic.twitter.com/NxBWCxoxSq

“A path to citizenship for immigrants in the US would grow the economy and create thousands of jobs,” tweeted Texas Rep. Joaquin Castro, who is among the Congressional Democrats to have called on the Biden administration to prioritize essential workers in its infrastructure plan. “A path to citizenship for essential workers is a critical part of building our economy back better,” legislators wrote to the Biden administration in April. “The upcoming legislative package on jobs and infrastructure is the best opportunity to recognize and reward the sacrifices and labor of essential workers.”

Tuesday also marks the ninth anniversary of the DACA program, and undocumented youth and their allies are using the date to push Democratic leaders to act on their own and pass permanent relief for undocumented communities. United We Dream leader Greisa Martinez Rosas said that “[w]hen given the opportunity to do what is right, Republicans have shown us that instead they will vote against the Jan. 6th commission, emergency relief for millions in a deadly pandemic, they will strip communities of unemployment benefits, suppress voting rights, and attack immigrants.

“Democrats cannot allow Republicans to keep progress from happening this year,” Martinez Rosas continued. “Democrats can and must lead on their own through the reconciliation process. As we celebrate nine years of our power in winning and protecting DACA, we must remember that DACA is temporary and our communities need and deserve permanency through a pathway to citizenship.” As the numbers have made clear, it’s undeniable that doing so would benefit many communities.

“As the findings above show, creating a pathway to citizenship for undocumented immigrants not only is the right thing to do but also would be a substantial stimulus to the U.S. economy,” said CAP Immigration Policy Associate Director for research Nicole Prchal Svajlenka said in a statement received by Daily Kos. “Undocumented immigrants are critical to the nation’s social infrastructure—a fact that has become even more widely understood amid the coronavirus pandemic—and a pathway to citizenship is a key component of a just, equitable, and robust recovery.”