Somebody tell Tucker: Yet another video shows just who was behind insurrection violence 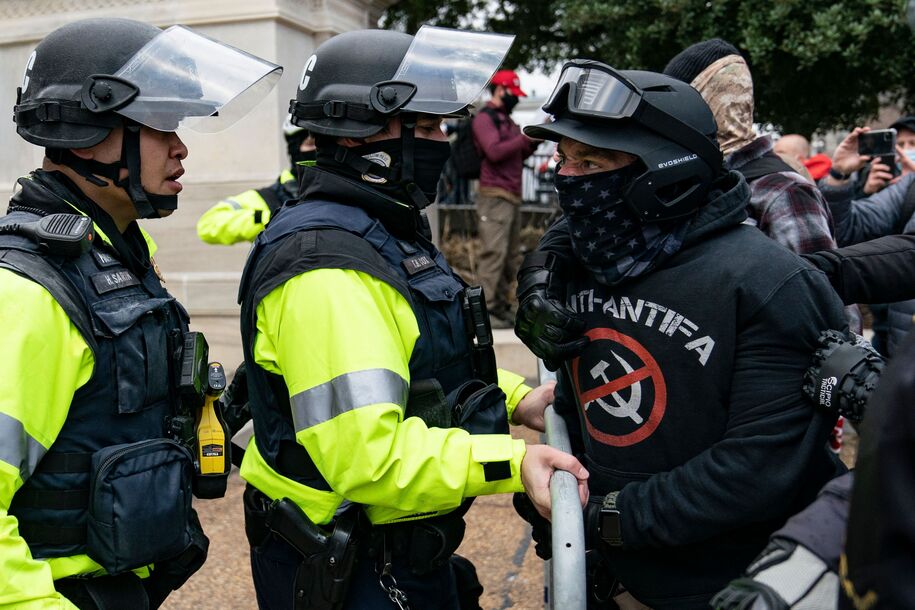 The Justice Department has released a few more videos from the Jan. 6 insurrection, and once again the clips support prosecutor allegations that at least among certain sets of Capitol attackers, the violence was indeed planned and intended to be an insurrection against the government. It wasn’t a good plan, mind you, but the violent far-right fringe of this country has never been a group that troubles itself with plans more detailed than, “If we just start killing people, won’t the rest just work itself out?”

The videos in question are evidence in a federal court case against alleged Proud Boy provocateur Charles Donohue, who is charged with helping to plan the violence. One video shows an unidentified man shouting through a bullhorn, “Let’s take the fucking Capitol,” followed by someone with several more neurons shouting back, “Let’s not fucking yell that.” The other two show Donohue and another Proud Boy carrying a transparent riot shield that had been taken from defending law enforcement officers, and then Donohue in a crowd immediately before a violent attack on police protecting a building entrance. Other evidence indicates Donohue as the person who used a riot shield to break a Capitol window. (Again, they’re called Proud Boys, not Smart Boys. This is about the most you can expect from the group.)

As for where the videos come from: They’re presumably from other charged insurrectionists, many of whom were giddily documenting each of the crimes in progress.

From the moment the insurrection failed, Republican lawmakers, Fox News propagandists, far-right militia groups, and anyone else whose election “fraud” rhetoric could be traced as primary instigator of the attempted coup all insisted that it must actually have been fomented by anyone from “antifa” to “the FBI.” Luckily for all of those people—and the rest of us!—there is voluminous video evidence of just who did what, and all of those committing violence that day were people who had been unafraid, before then, to let their own social circles know just how much they loved either Donald Trump or the idea of mounting an insurrection against the United States government because Reasons. We have the video in which they made their intentions clear, video of them moving through each step of the process, video of them chanting about who their government enemies were and what they wanted to do with them if they succeeded in finding them, and so on.

White nationalist Tucker Carlson has a stake in pretending to his white nationalist audience that nobody knows nothin’ about who attempted to kill the vice president or hold Congress hostage until they agreed to nullify the election results, but the law enforcement officials piecing together which subgroups did what do not appear to be gaslighted on this one.

There still needs to be a full, independent investigation of just how these multiple violent groups all simultaneously hatched plans to topple government by way of overturning a national election. Any such probe won’t need much time to conclude that the plans to march on the Capitol at the exact moment Congress was validating a Republican election loss were directly tied to numerous Republicans, including a traitorous “president,” who directly asked them to do just that. But there’s still a good bit of uncertainty about just how closely Trump allies like Roger Stone coordinated with explicitly violent groups to make sure the demanded “march” in fact happened.

A majority of Republican lawmakers voted to question the results of a presidential election based on intentional hoaxes seeded by themselves and their allies. The pro-Trump attack on the Capitol building during the vote was intended, by its Republican organizers, to provide a veneer of “public outcry” justifying the extraordinary act of tossing out election results so as to invent some new way by which the incompetent killer of a half million Americans could be returned to power regardless of what the vote totals turned out to be.

The moment Republican leaders peddled anti-election, anti-democracy hoaxes that they knew to be false was the moment the party turned to sedition. The violence that day was the predictable—and predicted—result.

And yet, somehow, we’re still creeping towards an outcome in which the petty foot soldiers of a violent insurrection are being arrested and convicted for their crimes while the political strategists and lawmakers who assembled them are left free to continue peddling the same treasonous hoaxes. Still!