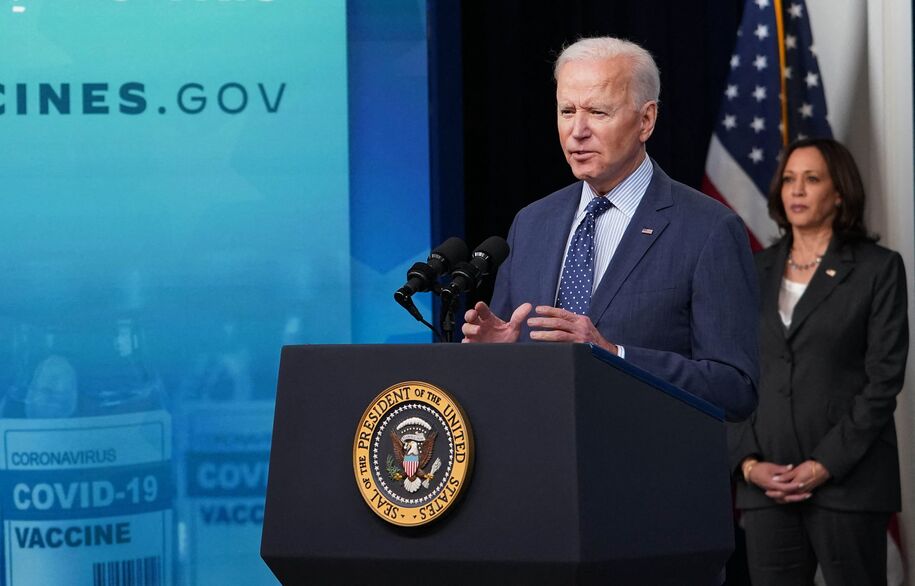 America is going to come this close to hitting President Biden’s goal of having 70% of the nation vaccinated by July 4. But as that date crowds closer, it seems like we’re just going to miss.

Biden originally set a goal of delivering 100 million vaccinations in his first 100 days in office — a goal that was far from certain, since he came into a system where deliveries of vaccine were uncertain and chaotic. But Biden’s team quickly professionalized the movement of vaccine out to the states, blowing away that original milestone. As a follow-up, Biden upped that goal to 200 million doses. Biden also put in a goal of doubling the number of pharmacies administering doses. And he set out to double the number of federal vaccination sites. All those goals were met and exceeded. In early April, the U.S. actually administered 4.5 million vaccinations in a single day.

But since that time, the rate of vaccination has steadily declined. Over the last 7 days, the average was only about 750,000 vaccinations a day. Despite the recent opening up of some vaccines to those ages 12 and older, and incentives from states ranging from free beer to million dollar lotteries, vaccination rates continue to fall.

That would be fine if the reason was that we were simply running out of Americans to vaccinate. But the current number of Americans over age 18 who have received at least one dose of vaccine is 65.4%. That means that, at the current rate, it’s likely America will hit July 4 with somewhere around 67% of American adults at least partially vaccinated. That’s about 55% of the total population. Barring a last minute miracle (or a tide of rising fear generated by the very scary Delta variant), we’re not going to meet the 70% by July 4 goal. But that is not going to stop President Biden from gathering people to celebrate, or prevent him from setting new, and even more ambitious goals.

As CNN reports, the White House is moving ahead with plans for “a big celebration on the South Lawn” with 1,000 guests on hand to cheer for how vaccines have put most of the country on a path to something that’s starting to look a lot like “normal.” Biden is expected to introduce new milestones, which may include the number of doses that the U.S. has delivered to other nations. In addition to sharing excess vaccines that are available from the U.S. stockpile and working out a plan for distribution, Biden has made it clear he intends to buy another 500 million doses for distribution outside the U.S. — which puts America down for fully half the vaccine that has been promised by the G7.

Back in January, Biden moved quickly to secure additional doses of Pfizer, Moderna, and Johnson & Johnson’s vaccines. By the end of the month, he had secured enough doses to cover the nation, and had hopes of vaccinating every American adult by summer. That hasn’t happened, not because of a lack of vaccine or a lack of vaccination facilities, but because over 40% of Republicans are still refusing to be vaccinated.

That vaccine resistance among Republicans is the biggest reason the nation will not be hitting the milestone set out by Biden on July 4 — a fact that is sure to garner some high fives on Newsmax and some self-congratulatory smugness on Fox News. See Republicans? You can thwart Biden’s plans when you stick together.

In other news, Wyoming, Louisiana, Idaho, and Missouri continue to top the charts when it comes to cases of COVID-19 per capita. In particular, while most of the nation has seen a sharp decline in cases, Missouri is actually seeing both new cases and deaths at their highest level since February. This comes shortly after the Republican legislature and Republican governor passed a new law that limited the ability of county health officials to address public health threats with restrictions on business, schools, or public gatherings. It’s not clear if Missouri will have its own celebration on July 4 to celebrate those patriotic Americans who surrendered their lives so that Joe Biden couldn’t meet his goal.

How far will conspiracy theorists go to avoid taking vaccines that have proven to be both safe and effective? So far that they’ll skip right over taking dangerous levels of a drug meant to treat malaria, and move right on to a veterinary wormer. As Science-based Medicine reports, even as right-wing media pretends that taking massive doses of hydroxychloroquine is effective (it’s not), there has also been revived interest in the drug ivermectin, which is most often used in the United States to treat dogs and horses for heartworm.

To be fair, ivermectin is also used in treatment of humans, specifically those with a handful of tropical parasitic diseases including onchocerciasis (“river blindness,” a disease caused by parasitic worms and spread by repeated bites from tropical black flies) and helminthiases (more parasitic worms).

This isn’t a new claim. ivermectin was one of the first “wonder drugs” being passed around in 2020 with claims it was effective against COVID-19. In fact, it was so widely praised that a year ago the FDA had to explain “Why You Should Not Use Ivermectin to Treat or Prevent COVID-19”. The reasons included:

The FDA also had to point out that doses formulated for a horse weighing close to a ton, should not be taken by a human being who (hopefully) weighed somewhat less than a horse.

The CDC took early reports of ivermectin’s effectiveness more seriously, and published a note on the proposed mechanism by which is was thought to “work.” And then people did trials, like this one in The Lancet from February, showing that ivermectin was completely ineffective against COVID-19.

But the fact that more and more analysis have shown that neither hydroxychloroquine nor ivermectin have any benefit for COVID-19 patients hasn’t stopped a 2021 resurgence of interest from the same people who are convinced that vaccines make people magnetic. And in both cases, right wing media is rife with claims that the good news about these miracle drugs has been “suppressed” by the liberal elite — a group that apparently includes the vast majority of medical experts.

This harmful nonsense isn’t limited to the United States. It’s also being spread by Trump-of-the-South, Jair Bolsonaro, who seems set on passing his fellow authoritarian’s death toll. And he very wll make it.

As The Wall Street Journal reports, the hot spot for COVID-19 cases has shifted away from Asia to South America. And “hot” barely seems adequate. Brazil has now passed 500,000 dead, and is still topping the charts for new cases and new deaths as Bolsonaro continues to take actively harmful action (see above). The 5% of people who live in South America now account for a quarter of the COVID-19 deaths. As a group South American nations are now losing people seven times as fast as India. Seven of the bottom 10 worst countries at the moment are in South America.

Some of those countries, like Argentina, have seen a recent drop in cases, but are still at levels far above past peaks. Others, like Brazil, are not just at high levels, but still trending upward. Still others, like Uruguay, Suriname, and Colombia are simply red hot.

When it comes to vaccination, there is an enormous range across the region, but even in those nations with a high rate, the numbers can be deceptive. For example, both in Chile and Uruguay the high level of vaccination includes mostly doses of Sinovac, which had an efficacy of just 51% in Brazil and 56% in an earlier test in Chile. That relatively low efficacy means that the current level of vaccination has still not been sufficient to stop a new wave of infections.

Facing both the rapidly spreading Delta variant and dominated by the somewhat vaccine evasive Gamma variant (formerly known as the Brazil P1 variant), these countries are being hit with a one-two punch of the worst variants evolution has yet cooked up, and vaccination programs that are either completely ineffective or short of high-efficacy vaccines.

Things may be getting back to normal in much of the U.S., but mass graves and overflowing hospitals are still the rule in far too many nations. The pandemic is not over.

Florida demonstrates how not to deal with a deadly outbreak

As CNN reports, an outbreak of COVID-19 swept through the offices of Manatee County, Florida. At the head of the outbreak was an IT manager who was unvaccinated. The outbreak spread through the building, leaving two dead and four others hospitalized.

Only one worker in the office who was exposed to the virus had been vaccinated. Because Florida. Also, because Republicans. That one vaccinated person was the only person known to be exposed who did not get infected.

With all of this happening in just a small group of a single building, it might seem reasonable that Manatee County would not require all employees to get vaccinated before returning to work. Or require that all employees wear a mask. That didn’t happen. The building reopened on Monday with no mask requirement. And thanks to Gov. Ron DeSantis, Manatee County — like every other state or local government body — can’t require anyone to get vaccinated.

“The clinical presentation gives me concern that we’re dealing with a very infectious variant that is quite deadly,” said the county administrator. And now they’ll wait for it to happen again, having taken exactly zero effective action.

As NDTV reports, COVID-19 cases in India are being accompanied by a rapid rise in a disease that has all the horrific aspects of something cooked up in a horror novel. “Black fungus” can spread across the nose and face and into the lungs. It discolors the skin, and causes blindness, chest pain, breathing difficulties and coughing blood. It also causes death. In the last three weeks, over 2,000 people in India have died from the fungal infection, many of them patients who were fighting off long term effects from COVID-19.

The fungus, mucormycosis, is generally considered rare. However, the large number of patients weakened by COVID-19 represents a unique “opportunity” for this opportunistic infection. Cases are up 150% in just the last month. Increasing the problem is a nationwide shortage of Amphotericin-B, an antifungal medication that is often the last line of treatment against this infection.

In the United States, mucormycosis is still considered rare, but it is widely established at hospitals and care facilities across the nation. As Medical News reports, COVID-19 creates “the ideal environment for mucormycosis” by inducing diabetes, new-onset hyperglycemia, or steroid-induced hyperglycemia. Abnormal levels of glucose help to promote the growth of the fungus spores. Low oxygen levels and a weakened immune system can also help the fungus to get established. It can be spead around a hospital after spores land on “adhesive bandages, wooden tongue depressors, hospital linens” and can also be spread by poorly sterilized equipment, such a ventilators.

While the disease may be rare in the United States, it is no less serious. In fact, the CDC gives the disease a mortality rate of 54%.