Progressive Buffalo mayoral candidate shocks in major election upset: ‘I hate to say I told you so’ 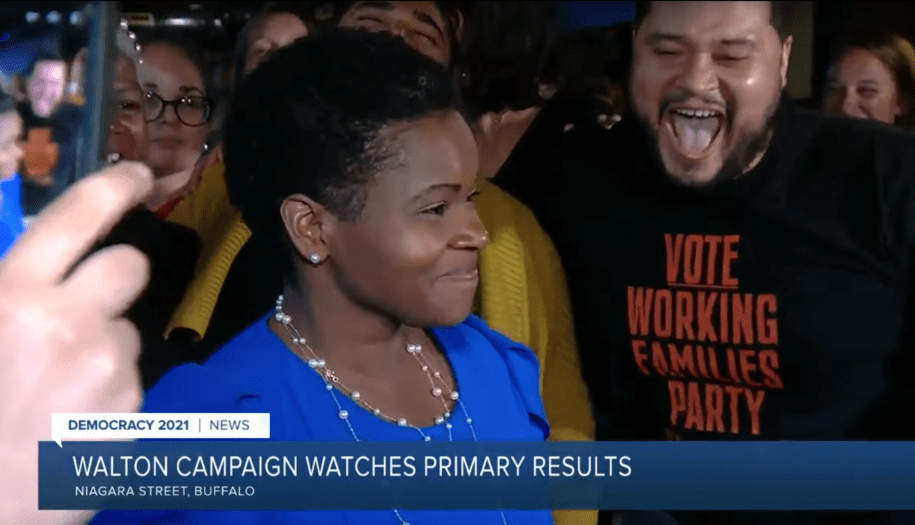 On Tuesday night, India Walton, the socialist candidate for mayor of Buffalo, New York, won the Democratic primary election against four-term incumbent Byron Brown. The nurse and organizer’s victory over Brown has not yet been acknowledged by the Brown campaign (as of Wednesday morning and the writing of this story). The Washington Post reports, however, that there are not enough outstanding absentee ballots left to change the current results. Walton’s primary victory, in a predominantly blue city, means she is almost assured to win this November. On Tuesday night, Walton held a press conference and declared victory. She will become the first self-identified socialist to become mayor of a major American city in 60 years. She is also set to become Buffalo’s first female mayor.

During her victory speech, Walton told the crowd: “This victory is ours. It is the first of many. If you are in an elected office right now, you are being put on notice. We are coming.” There’s a centrist quagmire going on in the New York City mayoral race. Traditional media outlets argue that the perception of skyrocketing crime rates—something the traditional media does a lot of alarming on—meant that calling for police reform is not a viable campaign platform. This is in part contradicted by Walton’s victory. Walton’s win has been described as something of a “shock.” But as the victorious Walton opened her speech on Tuesday night at a bar in Buffalo, she smiled and said, “I hate to say I told you so.”

Our own Daily Kos Elections team pointed out back in May that Brown, while considered the favorite, was “vulnerable” as he ran for an unprecedented fifth term. And up until the last weeks of the elections, local news outlets did not seem to believe that the Brown campaign had much to worry about. They were wrong, of course, and Walton explained during her victory speech that this win and her qualifications for this office were generated from the same skill set: “I’m a coalition builder.”

As CNN is asking police to tell them about why we need more police, Walton and others reminded the citizens of Buffalo that more police does not mean less crime or less violence for Buffalo citizens. The cruel assault of 75-year-old peaceful activist Martin Gugino, whose skull was fractured when Buffalo police shoved him, unprovoked, to the ground during Black Lives Matter protests this past summer, was a reminder of what kind of “safety” a militarized law enforcement apparatus actually provides.

Walton also explained that the pandemic and subsequent government relief packages have highlighted what she and other progressives have been saying for a long time: The government has a role in making the lives of its citizens better by providing services we all agree should be available to us. “One of the things that our campaign has been really good at is storytelling — being able to explain to people why socialism is not this evil monster that the establishment wants you to believe it is. Parts of the pandemic relief measures have brought to light what DSA has been saying: we can have health care for all; we can forgive debt; we can cancel rent; we can prioritize the health of our communities over the profits of large developers and big corporations.”

In an interview with Jacobin Magazine in May, Walton, a lifelong Buffalo resident, explained her positions. Her story and the simple corporate corruption that she and others experience in our government seem to have spoken to people.

Having overcome that and become a registered nurse, I still faced barriers. And my story is not unique in that sense. Plenty of people work forty hours a week and still have to rely on food stamps, Medicaid, and other social programs. With rising housing costs and the price of childcare, it’s impossible for the people who work the hardest to live a decent life. All the while our federal, state, and local governments subsidize corporations like Walmart and Tesla.

But most damning for Brown was likely this fact, experienced by not only Walton but numerous others: “Our current mayor is a four-term incumbent who has been in office for sixteen years. A fifth term would make him mayor of Buffalo for twenty years. I’m thirty-eight years old, so that means that since the time that I’ve been able to vote, he has been in charge. And I can attest that my experiences — as a Buffalonian, as a mother, as a black woman, as a worker in this community — with him at the helm have not been positive.”

India Walton: “We lived through decades of the trickle-down theory … We are looking forward to doing things differently.” pic.twitter.com/DJc5sEpSz3

Walton had received endorsements from the Democratic Socialists of America as well as the Working Families Party (WFP), and reportedly was able to outraise Brown in the final weeks before the primary. Even with the strong fundraising done by Walton and others, she knew she would be outspent. “We saw billionaires from all across the country or the hundreds of thousands of dollars into Mayor Brown’s campaign in order for him to fight against having a voice for working class people. I’m bracing myself for the future.”

Some highlights from Tuesday night include Walton calling her mother to tell her she won.

A proud and intelligent person need not be afraid of words that have been misused by others.

Reporter: “Do you consider yourself a socialist?” @Indiawaltonbflo: “Oh, absolutely. The entire intent of this campaign is to draw down power and resources to the ground level and into the hands of the people.” pic.twitter.com/kcSmYdIxB4

And Walton putting the status quo on notice.

“This victory is ours. It is the first of many. If you are in an elected office right now, you are being put on notice. We are coming.”@Indiawaltonbflo declares victory pic.twitter.com/Z1cBjhGWau