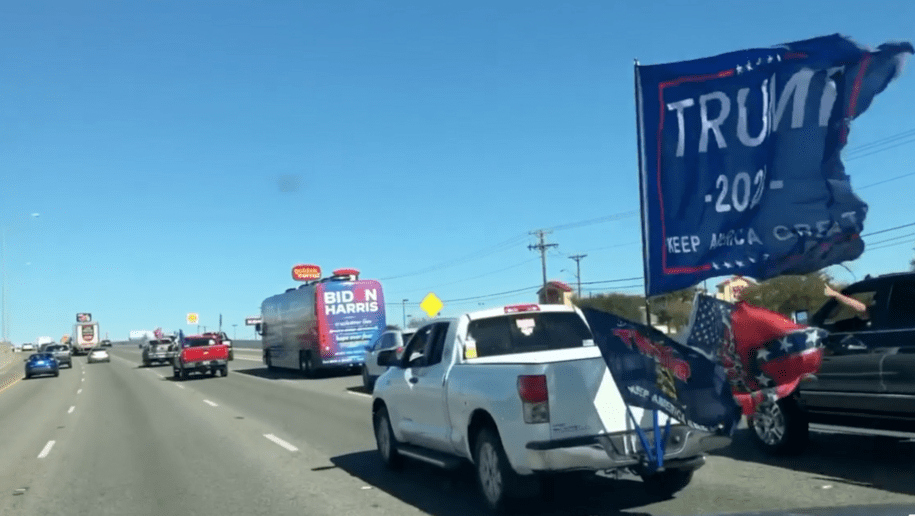 The “Trump Train” vigilantes who endangered a Biden campaign bus in Texas last fall are going to have to answer for their actions in court. A White House staffer, a former Texas state representative and two Biden campaign staff are suing the Trumpers involved, alleging that they violated the Ku Klux Klan Act in a coordinated and illegal act of political intimidation.

“They played a madcap game of highway ‘chicken,’ coming within three to four inches of the bus,” the lawsuit alleges. “They tried to run the bus off the road,” referring to the defendants. The plaintiffs are a current White House staffer, David Gins; former Texas state Sen. Wendy Davis; former Biden campaign volunteer Eric Cervini; and the driver of the Biden campaign bus, Timothy Holloway. They write in the complaint that the Trumpers “terrorized and menaced the driver and passengers on the Biden-Harris Campaign’s bus” for at least 90 minutes.

The defendants are Eliazar Cisneros, Hannah Ceh, Joeylynn Mesaros, Robert Mesaros, Dolores Park, and a Jane and John Doe. The complaint says they planned the incident ahead of time. The campaign ended up canceling at least two campaign events in Texas out of concern for public safety, concern that was warranted since a crowd of Trump supporters surrounded the bus once it reached its destination in Austin, and continued the harassment.

As David Neiwert reported, the whole thing was recorded. “Videos show the pro-Trump vehicles surrounded the bus on the freeway and slowed its progress, as passengers and drivers shouted obscenities and various epithets; one witness claimed many of them were armed,” Neiwert wrote. “At one point, a pickup driver veered into a campaign staff vehicle following the bus and smashed its fender, forcing it into another lane.” The video also showed the planning—or conspiring—part of the attack. “Videos showed the vehicles lined up along the freeway in wait for the bus, then speeding up and surrounding it as pro-Trump onlookers cheered and laughed. According to people on the bus, the vehicles slowed and appeared to attempt stopping the bus altogether.”

A later event with state Rep. Sheryl Cole was also cancelled because of the threat to participants and public safety.

This is a 1st for me – but we just cancelled a joint event in Pflugerville w/ @JoeBiden campaign, @AustinYoungDems, & more, due to security reasons. Unfortunately, Pro-Trump Protestors have escalated well beyond safe limits. Sorry to all who looked forward to this fun event. https://t.co/tSq4moqro0

There were no criminal charges filed against the Trump supporters involved, but there is an FBI investigation that an official confirmed to CNN is still ongoing. The plaintiffs in this suit are also suing San Marcos, Texas,law enforcement officials and employees for refusing to respond to the incident.

“Though I’ve been involved in many political campaigns for myself and others over the past couple of decades, I have never before experienced the threat or fear I felt when the ‘Trump Train’ surrounded our bus,” Davis told CNN. “I’m a part of this suit because I’m worried that this sort of dangerous behavior threatens to become the new normal if we don’t stop it.”

That’s one former elected official’s response to the attack. Then there’s Sen. Marco Rubio, the Florida Republican. He was thrilled by it.

Sen. Marco Rubio (R-FL) at last night’s rally on the Texas Trump caravan that menacingly surrounded Biden bus: “We love what they did, but here’s the thing they don’t know: We do that in Florida every day. I love seeing the boat parades … We thank all the great patriots…” pic.twitter.com/kRaLcW60jn