Biden outplayed Republicans on infrastructure, but it only counts if he gets a reconciliation deal 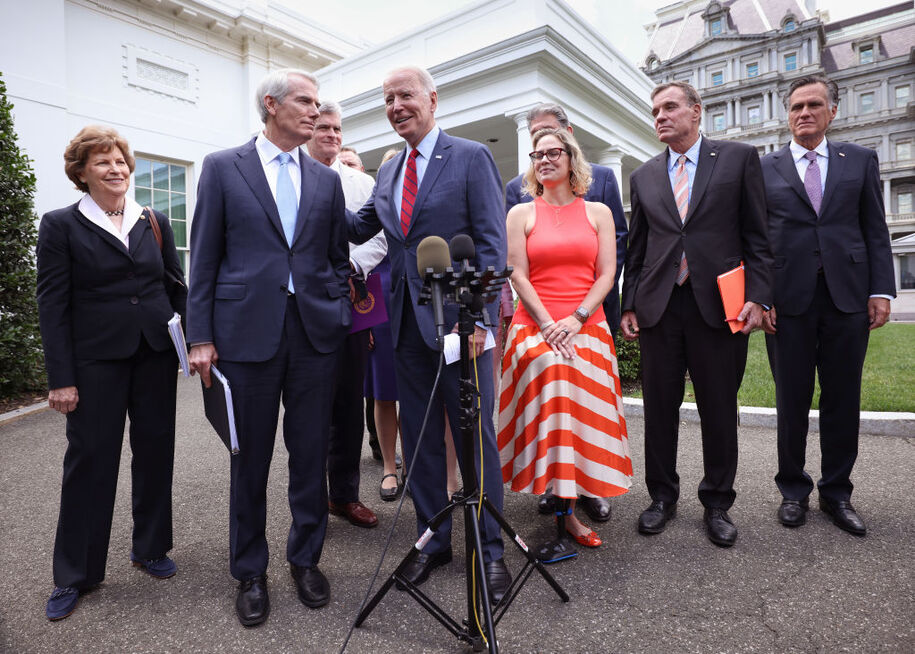 “We have a deal,” President Joe Biden announced Thursday, celebrating the framework of a bipartisan infrastructure deal worth $1.2 trillion, only about $580 billion of which would be new spending.

“They have my word, I’ll stick with what they’ve proposed,” Biden said, flanked by a core group of Senate Democrats and Republicans. “And they’ve given me their word as well. Where I come from, that’s good enough for me.”

But less than 24 hours after the kumbaya moment, the word of Republicans carried less weight than a phone number drunkenly scribbled on a bev nap after last call. GOP senators claimed they were shocked, indeed “blindsided,” by the president’s intention to continue pushing a separate Democrats-only bill to invest several trillion dollars more into his health care, education, climate, and child care initiatives.

Later on Thursday, Biden had explicitly outlined the necessity of passing a separate reconciliation bill, telling reporters it was imperative that his other priorities be addressed in a measure that would be negotiated by Democrats alone.

“If this is the only thing that comes to me, I’m not signing it,” Biden said of the bipartisan infrastructure deal. “It’s in tandem.”

Republican Sen. Jerry Moran of Kansas was reportedly “wavering” in his support for the deal. In order for him to stay on board, Moran was demanding assurances from the chief Democratic conveners of the group—Sens. Kyrsten Sinema of Arizona and Joe Manchin of West Virginia—that they would oppose passing a Democrats-only bill through the Senate procedure known as reconciliation.

“No deal by extortion!” Sen. Lindsey Graham of South Carolina complained in a Friday tweet. “It was never suggested to me during these negotiations that President Biden was holding hostage the bipartisan infrastructure proposal unless a liberal reconciliation package was also passed.”

Wait, who’s holding who hostage? No one forced Senate Republicans to sign onto something that might actually do good for the nation—like creating jobs and modernizing our ailing infrastructure. Meanwhile, Graham and Moran are both threatening to jump ship unless Democrats forfeit Biden’s other domestic priorities. In the first instance, Republicans get to exercise free will—choosing whether to support or not support the deal. In the second, Republicans are making their support conditional on Democrats surrendering to their dictates.

How novel that Graham is accusing Biden of doing precisely the thing he himself is doing—hostage-taking. Seriously, Republicans must get up every morning, look in the mirror, and practice saying, “No, you’re the ones who stole the election! No, you’re the traitors!” Projective disinformation is just bread-and-butter GOP politicking now.

Anyway, Republicans are now claiming Biden negotiated in bad faith because he never told them something Democrats have actually been talking about publicly for months—that they were pursuing two tracks, a smaller bipartisan deal and a bigger reconciliation package.

Following the GOP uproar, it didn’t take long for the Democratic Party to assemble a few links documenting the recent history of what everyone who has been living on this planet has been fully aware of for months.

Just a couple weeks ago, POLITICO actually reported an entire piece about the GOP plan to secure the smaller bipartisan package in hopes that it would kill Democratic momentum for a larger reconciliation bill on Biden’s other priorities.

“It’ll be awful hard to get those moderate Democrats to be for [reconciliation],” said Sen. John Thune of South Dakota, the Senate GOP’s No. 2 deputy. “The stars are kind of lining up for an infrastructure bill. And if you do do something bipartisan on that, then I think doing something partisan on reconciliation—in some ways, with certain Democrats—it gets a lot harder.”

Huh. Sure sounds like Senate Republicans damn well knew Democrats were hoping to get a companion bill, even if they managed to secure a bipartisan deal.

And as far back as mid-May, none other than Sen. Shelley Moore Capito of West Virginia, the lead GOP negotiator in the original bipartisan talks, said President Biden explicitly told Republicans he hoped to address a second set of priorities through a Democrats-only reconciliation bill, according to ABC News‘ congressional journalist Trish Turner. Capito even said that wasn’t a deal breaker for her.

“I mean, why wouldn’t we work with the President of the United States to improve our infrastructure or make any other improvements in the country?” Capito said. “We know that they have that [reconciliation] option, we used that option in 2017,” she added, referring to the GOP’s wildly unpopular tax giveaway to the rich.

And earlier this month, Minority Leader Mitch McConnell mused, “We are anticipating at some point getting a reconciliation bill.”

So, not exactly “blindsided.”

On Thursday, House Speaker Nancy Pelosi echoed Biden’s sentiments on linking the bills, saying the House wouldn’t move on any bill until both bills had cleared the Senate. She added, “If there is no bipartisan bill, we’ll just go when the Senate passes a reconciliation bill.” In other words, the reconciliation bill is the must-have: House Democrats aren’t moving without it. Pelosi is clearly reflecting the realities of her caucus, and she doesn’t think she can get a strictly bipartisan bill passed without the progressive priorities in a companion bill.

But even better, both Manchin and Sinema have indicated a continued openness to the reconciliation package.

“Reconciliation is inevitable,” Manchin told reporters, noting that the two-track strategy was “the only strategy we have.”

Sinema similarly said she was “open to finding a path forward” on what she called a “two-phase process.”

That was the Biden’s masterstroke—making certain Sinema and Manchin would return to the table for a Democrats-only bill.

For now, Americans have a chummy picture of President Biden standing outside the White House with Senate Republicans and Democrats, reassuring the public that the two parties can still deliver for them. “We have a deal” was the either the headline or the lede of nearly every mainstream story that accompanied that picture.

If Republicans walk on that deal, it will be on them to explain why they couldn’t follow through on doing something good for the country—and that’s apparently because Democrats insisted on doing other good things too. It’s a point White House press secretary Jen Psaki seized on.

“It will be up to Republicans to decide if they’re going to vote against a historic investment in infrastructure … simply because they do not like the mechanics of the process,” Psaki said. “That’s a pretty absurd argument for them to make; good luck on the political front.”

But Republicans reneging will also give Biden an opportunity to make the case to Sinema and Manchin that he went the extra mile and now reconciliation is the only way forward.

If Republicans stay, Biden will get to tout a huge win on bipartisanship, proving the theory of the case he articulated on the 2020 campaign trail to much ridicule. It will also give Manchin and Sinema incentive to do right by the White House on a reconciliation measure that ropes in more of Biden’s priorities.

Ultimately, if Biden gets a solidly progressive reconciliation bill through Congress—regardless of whether a bipartisan deal accompanies it—he will have out-maneuvered Republicans.

We likely won’t know how this all shakes out until late summer or even fall, given that both bills have yet to be written and clearly negotiations remain tenuous. But whether Republicans stay or go, President Biden left the week in a much stronger position to bring along his two most challenging Democratic senators on a reconciliation package that promises to make or break his legacy.