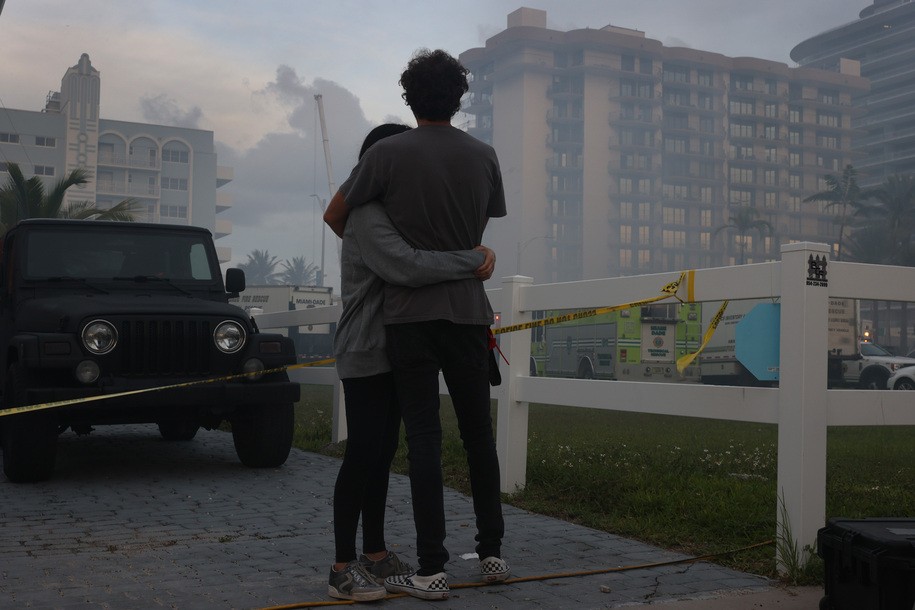 At least 159 people remain unaccounted for in the Champlain Towers South condo collapse, with four reported dead as of this writing. As hope dwindles, and first responders navigate dangerous conditions as they search for survivors, those personally affected are searching for an answer to one simple question: “Why?” Why did this happen? Could it have been prevented?

Though it will take time to gain certainty about cause of the deadly building collapse, answers are starting to emerge. The town of Surfside, Fla. released a nearly three-year-old inspection report for the collapsed Champlain Towers South high-rise condominium on Friday night. Conducted in October 2018 by Morabito Consulting, the assessment uncovered the need for significant repairs to the building, and identified “systemic” design flaws that were leading to “major structural damage” to the 13-story building.

An attorney for the Chaplain Towers South condo board, which is led by residents of the building, told The New York Times that multi-million-dollar repairs were just about to begin.

Before anyone could put on their hardhat, the building collapsed in the earliest hours of Thursday morning, while most of the community slept.

Champlain Towers South is a beachfront property in the tiny town of Surfside, near Miami. Built in 1981, the building has endured decades of hurricanes and climate change, but according to the newly released 2018 report by Morabito Consultants, the worst and most significant damage to the building was due to “a major error” in the design of the pool deck.

The main issue with this building structure is that the entrance drive/pool deck/planter waterproofing is laid on a flat structure. Since the reinforced concrete slab is not sloped to drain, the water sits on the waterproofing until it evaporates. This is a major error in the development of the original contract documents …

The report also notes that replacing the existing pool deck waterproofing would be “extremely expensive” and “create a major disturbance to the occupants” of Champlain Towers South.

Surfside’s Mayor told The New York Times that he was unaware of the nine-page Morabito report, and wanted to review it before making comment. However, the owners of the building were aware.

Kenneth S. Direktor, a lawyer who represents the resident-led association that operates the building, said this week that the repairs had been set to commence, based on extensive plans drawn up this year.

“They were just about to get started on it,” he said in an interview, adding that the process would have been handled much differently if owners had any indication that the corrosion and crumbling — mild instances of which are relatively common in many coastal buildings — were a serious threat.

Eliana Salzhauer, a Surfside commissioner, said that while the cause of the collapse was unknown, it appeared to her that the problems identified by the engineer in the 2018 report could have contributed to the structural failure.

“It’s upsetting to see these documents because the condo board was clearly made aware that there were issues,” Ms. Salzhauer said. “And it seems from the documents that the issues were not addressed.”

As those with loved ones trapped in the rubble begin to let go of their dreams of miracle rescues, the focus on the whys of this tragedy has crept in.

Sergio Lazano, who lived a block away in another Champlain Towers building, told The Daily Beast that “there’s no hope” for his parents, and he’s moved on to trying to convince himself that they died instantly, in their sleep. He, along with another resident who didn’t care to be named, told The Daily Beast that the building had long exhibited signs of damage—signs that were reportedly ignored.

According to them, steel reinforcing bars were protruding from the walls, cracks were forming on supporting beams, chunks of concrete were falling from one balcony to another, and the condo’s pool was starting to leak into the parking garage below—evidenced by the white stains on cars left by dripping water that had mixed with concrete powder.

However, one person told The Daily Beast that years of attempts to have the building’s condo board take on expensive repairs was met with stiff resistance from unit owners who were reluctant to spend the funds.

It’s still unclear what caused the sudden splintering of the structure, and it could be months before any determination is made. But at least one witness account that the condo’s pool had disappeared into a sinkhole is generating theories that the building was pulled down into disintegrating limestone, a natural occurrence that has long plagued Florida.

Here’s the sinkhole account, given to The Miami Herald:

Early Thursday morning, Mike Stratton awoke to the sound of his cellphone ringing. It was his wife, Cassie Stratton, on the other end, speaking frantically about their condo building shaking. She told him she saw a sinkhole where the pool out her window used to be. Then the line went dead.

Stratton last saw his wife on Monday, just before he left for a business trip in Washington, D.C. They’d lived in the high-rise for about four years.

At least one lawsuit related to the collapse has been filed; it’s a class action in the name of the victims and survivors, and asserts that

[Champlain Towers South Condominium Association Inc.]”failed to adequately secure the building, placing the lives and property of its occupants and visitors … at risk resulting in the collapse of the building.”

Further, the lawsuit declares that

“At all relevant times, defendant was aware, or reasonably should have been aware that the plaintiff’s and the class’s lives and property were at risk due to the lack of precautions taken at Champlain Towers South.”

An attorney for the condo association was quick to dismiss the lawsuit.

Donna Berger, another attorney with Becker Lawyers, told NBC News that it was “disappointing” for a lawsuit “to be the focus right now of any owner in Champlain Towers South, when almost 100 of their neighbors are still unaccounted for.”

“I feel as a culture we’ve become so accustomed from moving from one tragic event to another, and there’s often a rush to judgment,” she said. “This was a community that was functioning well and doing the right things and just struck with a freak tragedy.”

“How in the span of less than a day could an attorney file a lawsuit alleging anything? Every expert on the site doesn’t know what happened, yet some attorney has decided that he has figured this all out,” Berger added. “Certainly, if there’s culpable parties, they should be held accountable, but first and foremost our focus is on the search and rescue efforts.”

Berger also implied that nearby construction of another condo may have been to blame.

It will take weeks, if not months, before a final verdict on the cause of the collapse will come down from teams of investigators and engineers, providing some sort of closure for those who’ve lost loved ones and their homes in the collapse. Then, perhaps, that question of “why” will finally be answered for those left behind to ask.