‘Your eyes tell the story of your family’: Sesame Street talks racism and anti-Asian bias 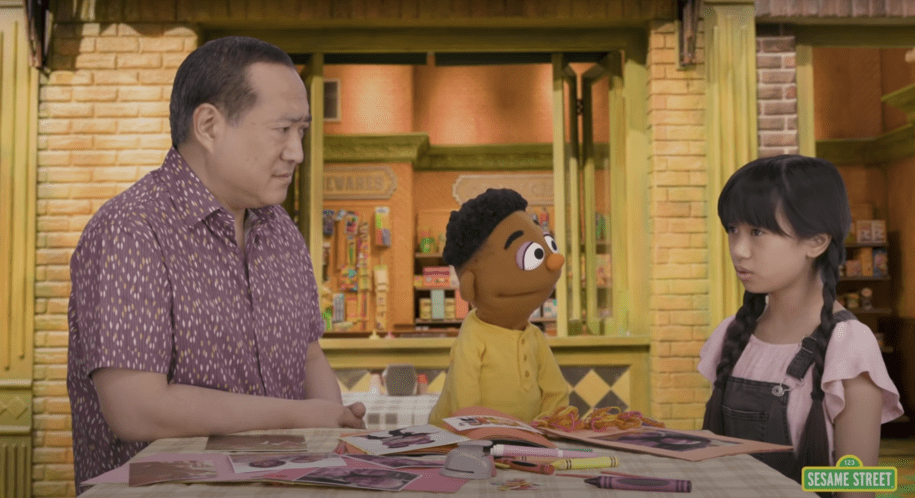 Having difficulty talking to your children about the rising anti-Asian violence across the country? Well, Sesame Street has got you covered. Amid the bullying many Asian American children are facing, Sesame Street has created content to help parents and children talk about why it’s wrong to make comments on one’s appearance. Additionally, the video featuring a child who experiences bullying also reminds children that they should be proud of what they look like.

“Your eyes tell the story of your family. They show where you come from, and how you came to be. The color, the shape, and the size. Should always make you proud of your eyes,” the characters sing in the video titled “Proud of Your Eyes.”

The video was released Monday as part of Sesame Workshop’s collection of new content under the The ABCs of Racial Literacy initiative. It follows a rise in violence and hate speech against the AAPI community, much of which has been attributed to COVID-19 misinformation and xenophobic language used to describe the virus.

The initiative hopes to help families talk about racial justice and combat stereotypes by providing resources including helpful videos, articles, and printables. According to NBC News, the segment and resources associated with it were created with guidance from racial equity groups including the Coalition for Asian American Children and Families.

“The reality is that many children grow up experiencing racism, including Asian American children who for years have reported high levels of racial harassment—a number exacerbated by heightened xenophobia and scapegoating during the COVID-19 pandemic,” Anita Gundanna and Vanessa Leung, co-executive directors of the Coalition for Asian American Children and Families, said in a statement, according to NBC News. “With a long history of building trust with families, Sesame Workshop is the ideal organization to engage parents and caregivers in critical conversations with their little ones, help families cope with the harms of racism, and help build solidarity among communities.”

“Having open conversations with children about race and racism is critical, not only for building understanding and empathy but also for beginning the healing process for children who experience racism,” Gundanna and Leung continued. Both served as advisers on the new Sesame Workshop resources.

The “Proud of Your Eyes” video begins with two characters, Wes and Alan, going through some photos. Wes is one of the show’s newest muppets, introduced earlier this year to help combat racism. Alan, a Japanese American, is a longtime cast member who first appeared on the show in 1998. The two are then joined by a girl named Analyn, who is visibly distressed. When asked if she is okay, Analyn, a Filipino American, shares that she has been teased about her eyes and called hurtful things, including “sneaky” eyes. Alan then sings a song about how eyes are not only beautiful but tell the story of one’s family.

In other videos released this month, Sesame Street talked about race and bullying and what strategies children can take to cope. In one video titled “Breathe, Feel, Share,” Wes tells his dad that he’s being bullied for his lunch and works with him on coping solutions. These efforts hope to not only combat racism but educate children on how being different is okay.

A recent study conducted by Sesame Workshop found that 86% of children felt as though people of different races aren’t always treated fairly. Additionally, parents reported that nearly half of these children had personally experienced some form of discrimination, NBC News reported.

Sesame Workshop has continued to play its part in keeping parents and young children aware of social issues by creating programming on a variety of topics including town halls on racism and episodes including refugees and other displaced children as muppets. Most recently an episode of Sesame Street featured its first gay married couple in honor of Pride Month.

Watch the segment below: