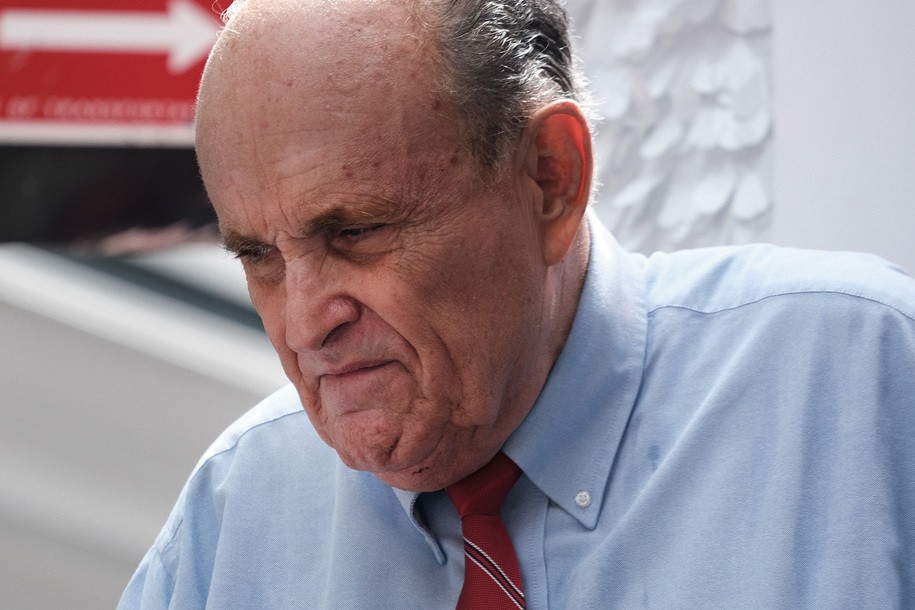 Failed human being Rudolph Giuliani was facing questions of corruption long before being added to Donald Trump’s advisory team. In 2017, U.S. District Judge Richard Berman wanted to know exactly what job the former New York City mayor had on the legal team of Turkish gold trader Reza Zarrab. Zarrab, an Iranian and Turkish national, was arrested on charges that he conspired to violate U.S. sanctions against Iran. In its most simple form, Zarrab reportedly used U.S. banks to launder the Iranian government’s money at a time when the United States had levied economic sanctions against them. The case against Zarrab was dropped and a plea deal struck under the Trump administration, and many people have wondered openly about whether or not Giuliani’s relationship to Turkey and Zarrab had anything to do with that.

On Tuesday, Bloomberg reported that the leaky hair faucet of a former mayor is the subject of a Justice Department “inquiry into possible foreign lobbying for Turkish interests separate from a criminal probe of his activities in Ukraine.” The Ukraine probe is in part believed to be what led federal investigators to raid Giuliani’s home a couple fo months ago. Bloomberg’s report claims that this inquiry is new. Thoughts and prayers and all of that.

Bloomberg says that while this is a new look into possible shady lobbying going on by Giuliani, it isn’t a criminal inquiry the way that the Ukraine investigation is. It seems that the Justice Department is just interested in figuring out why Giuliani may have forgotten to correctly register himself as a lobbyist if he was indeed acting as one for the Turkish government. But it is an important inquiry in that it might force Giuliani’s hand in regards to legally stating what his jobs have been over the past few years, in regards to other countries interests versus the United States’ interests. “If the government decides that Giuliani acted for a foreign interest, it could issue a determination letter requiring him to register as a lobbyist and also disclose all details of contacts he had with U.S. and Turkish officials concerning Zarrab and Gulen.”

But lobbying for Turkey is more than simply trying to see what can be done about a few sanctions. One of the problems that Turkey faced when Zarrab was in federal custody is that he was reportedly singing like a canary to the feds about then-Turkish prime minister and current president of Turkey Recep Tayyip Erdoğan’s possible ties to the laundering. Giuliani seems to have successfully gotten Zarrab out of the fire with a plea deal. Turkish bank Halkbank wasn’t so lucky it seems—they were charged in October of 2019 with “undermining U.S. sanctions against Iran” by federal prosecutors.

Of course, it was revealed later that even before the Zarrab deal was going down, and the Trump administration was replacing former U.S. Attorney Preet Bharara—who had brought the charges against Zarrab in the first place—disgraced national security adviser Michael Flynn was also coordinating with Turkish officials. Flynn’s dirty job was working on a “dead of night” operation to get around the U.S. extradition process in order for Erdoğan to get his hands on Muslim cleric Fethullah Gulen, who Erdoğan accused of orchestrating a failed military coup against him.

Whether or not Giuliani’s Ukraine inquiries (that’s at least two federal investigations into Giuliani’s Ukrainian dealings) will dovetail in some way with this Turkish inquiry remains to be seen. Whether the pressure of spending the rest of his miserable days in court not getting to be the bully he once was will lead Giuliani to finally spill the beans and tell federal investigators how much more Donald Trump was or was not involved in the many corruptions of his administration is also up in the air. One thing is for sure: Rudy’s earned all of this.