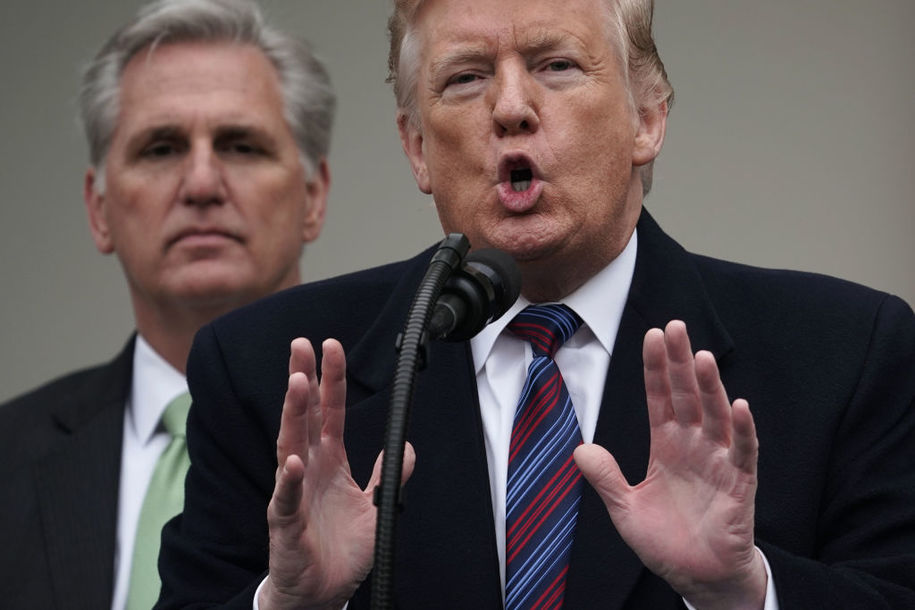 Many snows ago (okay, just one snow), Minority Leader Kevin McCarthy was adamant that Donald Trump bore at least some responsibility for the Jan. 6 insurrection. Why would he say that? Because the Jan. 6 insurrection wouldn’t have happened without the ocher abomination’s ceaseless barrage of fatuous lies. Had Trump simply admitted he lost when every sane person in the country could clearly see that he had, newly minted conservative folk hero Ashli Babbitt would be alive today, not to mention Capitol police officer Brian Sicknick and several others.

Trump—and his grotesque Hieronymus Bosch hellscape of an ego—is directly responsible for their deaths. Full stop.

But McCarthy doesn’t want to talk about any of that. He’s focusing on why the family AR-15’s safety was switched off when Baby started playing with it, not why it was in Baby’s crib to begin with.

REPORTER: “Do you believe that … former President Trump is accountable in some way for the events leading up to Jan. 6?”

MCCARTHY: “What I looked … have you read the Senate report? Did you read the Senate report? Did you have questions about the prep that we had for this Capitol? Were you concerned about, when they found IEDs in the morning, did we not call the FBI? Were you concerned about the idea that the sergeant of arms had intel provided by the FBI but it wasn’t passed forward? Were you concerned if we had that information, why didn’t we have a different presence built here? If you were concerned about riots, why would you put the riot gear in a bus that was locked down the way? In the time the riot took place, why was there not communication that had direction from leadership, because leadership wasn’t talking? There’s so many failures along that way that happened the days before that allowed individuals to get into the building. That’s what we want to make sure never happens again.”

REPORTER: “Former President Trump was the president at the time. Does he have no responsibility?”

MCCARTHY: [Goes to another reporter.]

REPORTER: “Leader McCarthy, do you think the pilot of the downed airliner bears responsibility for the lives lost when he deliberately crashed his 757 into Lake Huron?”

MCCARTHY: “Did you read the FAA report? Why were people confused about where their floatation cushions were? Didn’t they listen to the safety instructions? Why were their tray tables not stowed away? Why were their seats not in the upright and locked position? Why didn’t they bring snorkels and flippers with them in their carryons? There are just so many failures along the way.”

Of course, the current stance differs greatly from what McCarthy said on Jan. 13, one week after Trump’s failed bumblefuck putsch.

“The president bears responsibility for Wednesday’s attack on Congress by mob rioters. He should have immediately denounced the mob when he saw what was unfolding. These facts require immediate action by President Trump — accept his share of responsibility, quell the brewing unrest and ensure president-elect Biden is able to successfully begin his term. The President’s immediate action also deserves congressional action, which is why I think a fact-finding commission and a censure resolution would be prudent.”

That seems pretty unequivocal. So what the fuck happened?

Someone should dust McCarthy’s short-and-curlies for tiny man-baby fingerprints and spray tan residue.

Of course, it’s never a good sign when your party’s fortunes hinge on the dyspeptic whims of an insurrectionist, but that’s exactly what this photo demonstrates.

Oh, and I’m sure you remember this golden oldie.

But recounting from other members of Congress relayed a much more desperate plea from McCarthy as the Capitol — and even his own office — came under attack.

She later wrote in a statement that became evidence in Trump’s impeachment trial: “That’s when, according to McCarthy, the president said: ‘Well, Kevin, I guess these people are more upset about the election than you are.’”

Why are so many people seemingly in thrall to a rubbish human who tried to get them killed? Mike Pence. Kevin McCarthy. The city of Tulsa. His Secret Service detail. Pretty much every American, come to think of it. It’s like miraculously surviving Jim Jones’ Kool-Aid and then returning for seconds.

Of course, if this flourish of off-the-charts obsequiousness were limited to just McCarthy, it wouldn’t be such a big deal, even though he is House minority leader. But the pod people have taken over the GOP. And, frankly, it’s unlikely the Republican Party can ever go back to being merely evil after this. The delusional icing is just too thick on this cake.