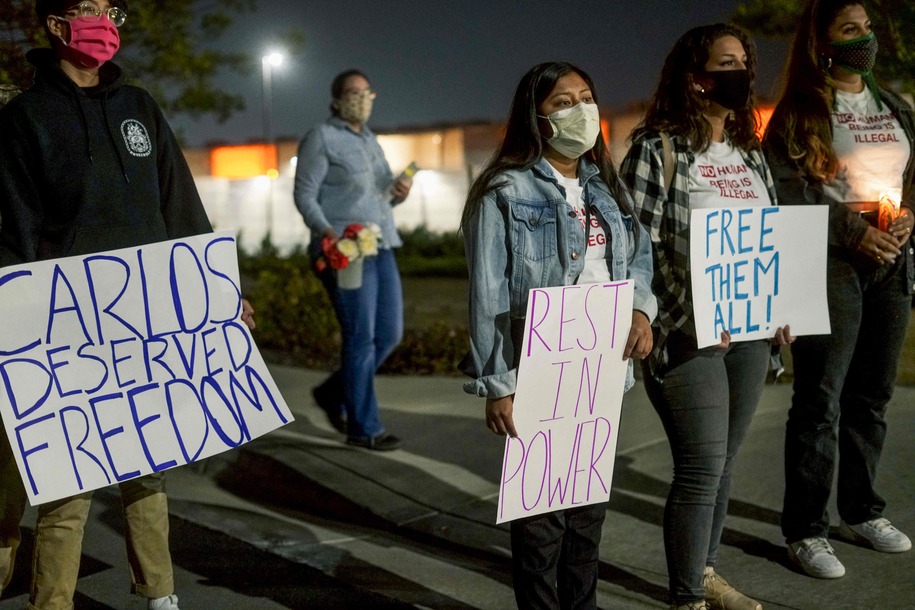 Detained immigrants and their advocates have said since the beginning of the novel coronavirus pandemic that Immigration and Customs Enforcement (ICE) isn’t taking this virus seriously (or just doesn’t really care to). For example, ICE’s refusal to release immigrants to shelter at home and in their communities added hundreds of thousands of cases to the national caseload.

Now immigrants have been joined by medical experts-turned-whistleblowers contracted with the Department of Homeland Security (DHS) Office of Civil Rights and Civil Liberties. In a letter to House and Senate members, they say ICE prisons continue to pose a major risk, to detainees, staff, and surrounding communities. Among a number of urgent actions, they say officials must “prioritize detainees for the vaccination at the same priority level as staff.”

In a June 25 letter released by the whistleblower group Government Accountability Project, Drs. Scott A. Allen, Pamela McPherson, and Josiah “Jody” Rich tell House and Senate Homeland Security and Judiciary committees that they raised their concerns to both the previous and current administration, in February and March 2020, then in March 2021. While ICE had a lower number of people in detention at the beginning of the year, about 14,000, the experts tell legislators that number has since skyrocketed to 27,000 in June, and with “no federal plan to vaccinate immigrants in detention. As such the same risks continue to threaten the lives of immigrants, staff and the surrounding communities from COVID.”

“Based on their medical expertise, Drs. Allen, McPherson, and Rich urgently recommend the Department of Homeland Security and White House: (1) develop and support a comprehensive COVID plan for detention, (2) prioritize detainees for the vaccination at the same priority level as staff, (3) secure vaccine supplies to support universal vaccination for the detained population and distribute them to facilities in a timely manner, and (4) address the well-known mental health consequences of the pandemic,” they said.

The American Civil Liberties Union (ACLU) this past May similarly called on the Biden administration to give detained people “immediate access” to the vaccine, with leaders saying that to continue to neglect people in ICE custody is “unacceptable and unconscionable, especially at a time where there is ample vaccine availability.” ICE has definitely come up with plenty of excuses why it can’t vaccinate detained people. Yet when advocates in New York tried to set up outside appointments, which ICE could in theory escort them to and back, officials balked.

Per the ACLU, over 15,000 people in ICE detention have become sick, “and at least nine have died after contracting COVID-19 in ICE custody.” Carlos Ernesto Escobar Mejia, the 57-year-old Salvadoran man who in April 2020 became the first person in ICE custody to die after testing positive for COVID-19, had actually been denied bond the month prior. His family since filed a wrongful death lawsuit.The San Diego Union-Tribune reported that his family alleged in the complaint that private prison profiteer “CoreCivic deprived him of adequate personal protective equipment, proper social distance, and appropriate treatment, all with the knowledge and participation of ICE and its officials. His death did not have to happen.”

CNN reports that ICE claimed in response to the whistleblower complaint that “it’s working with federal partners to receive its own allocation of vaccines ‘for immediate, nationwide distribution and anticipates receiving additional vaccines in the future,” and that it “is further expanding its vaccination efforts to include voluntary vaccinations for individuals in its care and custody.” Just now, in summer 2021. Whether this is a full, official national vaccination plan, whether particularly vulnerable people will be prioritized, whether it will make doses easily available to all detained people, whether there’s even a plan on paper, is all unclear.