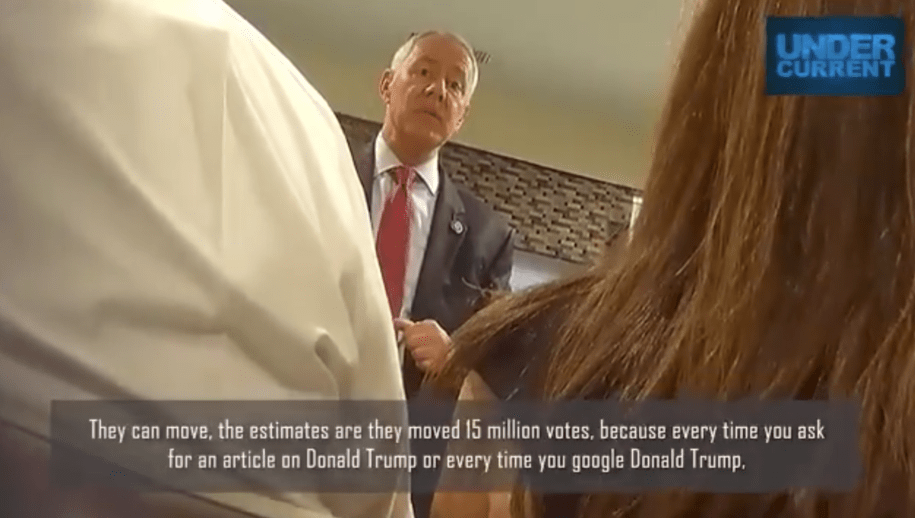 Earlier in the week, video appeared of Republican Rep. Chip Roy of Texas reportedly meeting with constituents (and Rick Santorum) to discuss how sowing the seeds of chaos and legislative obstruction is the best GOP policy going into the 2022 midterm election cycle. The exact quotes from Roy was that the GOP needed “to do everything we can to slow all of that down to get to December of 2022,” and any confusion surrounding bipartisan deals concerning our country’s much-needed infrastructure bill was a gift from his Christian God, “18 more months of chaos and the inability to get stuff done.’ That’s what we want.”

Lauren Windsor over at UnderCurrent, who posted the video of Roy, has posted a new video showing Republican Rep. Ken Buck of Colorado speaking with his constituents and misinforming them, or more honestly dis-informing them in regards to the real issues “Big Tech” represents to our country. Buck is known around here as a partisan hack, who also has a history of being a Obama birther conspiracy theorist amongst other things. In the video clip released Thursday, Buck is explaining that “Google, by the way, changed its algorithm in May of 2020 to disadvantage Donald Trump and to advantage Joe Biden.” Whoa. Considering that Rep. Buck is the ranking member on the House committee investigating an antitrust case against Big Tech, this is a surprising revelation, not mentioned in the myriad interviews Rep. Buck did about Google and antitrust findings of the committee in the last year.

Part of what makes this particularly egregious is Buck’s follow-up statement to constituents saying “And when you ask them about this, and I know people that own newspapers and I asked them about it, and they say,’ Oh, well, that’s just a technical thing. We don’t know what the result was. We just know that we did, that a technical person did this.’ Nonsense! They chose the winner.”

Think about that explanation for a second. If you are someone using even the basest of critical thinking, you have to wonder what the hell Rep. Buck is saying here. The fact that Google is a monopoly is a problem. The fact that Google manipulates its search engine to help squash competition in their various enterprises is not a new fact. It’s been researched and reported on for years.

But Buck takes this a step further by asserting that Google is a part of the Big Lie, rigging the election in favor of Joe Biden. “They can move, the estimates are they moved 15 million votes, because every time you ask for an article on Donald Trump or every time you google Donald Trump, and people here obviously google in a more sophisticated way, but people out there that were hearing about Donald Trump and they’re wondering, you know, ‘Donald Trump. Hunter Biden?’” That’s verbatim. You can watch the clip below 1,000 times and it still won’t make a lick of sense how “you know, ‘Donald Trump. Hunter Biden?’” swayed 15 million voters to vote for Joe Biden.

Someone in the audience heard that and the video jumps to her asking Buck to expound on his declaration that Google search engines “flipped 15 million votes to Biden.” Buck rolls up his mind sleeves and throws the eggheads under the bus! “What I’ve heard from, you know, sort of the academics on this issue is that by changing the algorithm, you can flip 15 million votes.” According to Buck, the academics he’s spoken to say that you can influence the vote of 15 million people to vote for Biden over Trump. In fact, “It absolutely happened. Absolutely. The algorithm happened.”

Buck then goes on to explain that the “day after that algorithm went into effect,” conservative readership at certain publications went down. This is possibly true, though it has been true for progressive online news sources for far longer. In fact, you can just read about how conservative reach got an enormous boost at the expense of progressive and more liberal-leaning news outlets over the past six years here. Buck finishes up by saying that while the Democrats will not investigate further, Republicans will still win the upcoming elections because “people are so upset about boys playing girl sports and critical race theory and all of the other things that are going on.”

Buck, like the rest of the Republican Party, now taking up the mantle of scamming its constituents out of money by fully sublimating itself to Donald Trump, is simply retreading on Trump’s authoritarian attempts to undermine our democracy. The moment Trump took office, his entire administration was spent trying to figure out ways to retain power, being in the truly unenviable position of feeling imposter syndrome while actually being an imposter of a person.