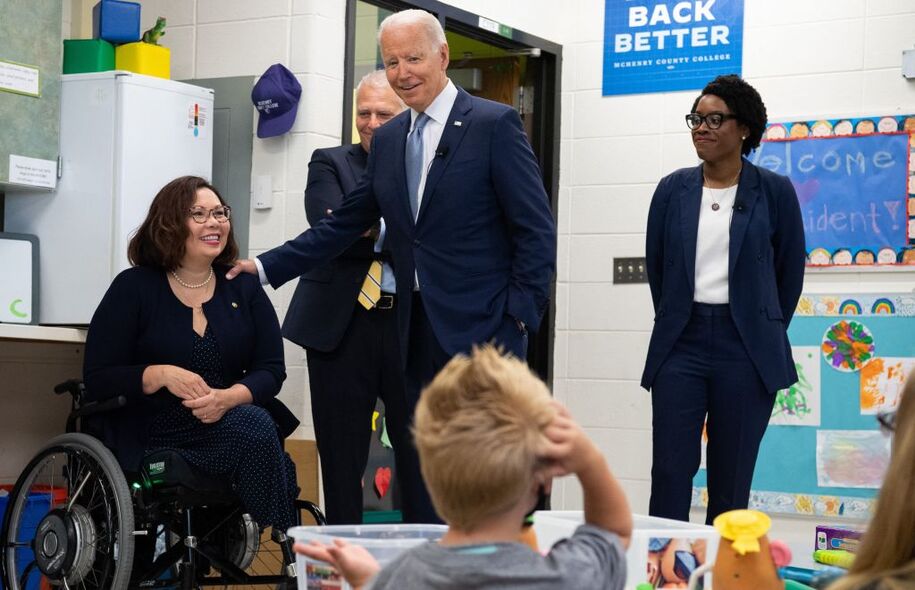 Donald Trump not only won Illinois’s 14th congressional district twice, but its Democratic representative, Lauren Underwood, narrowly won reelection last year in a nail-biter after flipping the district blue in 2018.

The district’s competitive nature and right-of-center lean is what made President Joe Biden’s visit there Wednesday so notable. Next year, House Democrats will be defending more than 30 Democratic incumbents who hold tough seats like Underwood’s while also targeting nearly a dozen others for potential pickups. There’s no room for error as Republicans only have to net a handful of seats next year to retake control of the House—an effort that will be boosted the GOP’s advantage in the redistricting process.

But Biden’s trip to Trump country to sell key features of his American Families Plan suggests the White House is more than comfortable leveraging the president’s policies to compete for votes, even in regions of the country that aren’t Democratic strongholds.

Although the White House has agreed to a bipartisan infrastructure deal aimed at funding more traditional projects such as roads and bridges, Biden used his visit to McHenry County College in Crystal Lake, Illinois, to specifically pitch more progressive pieces of his Families Plan that won’t be tucked into the bipartisan bill. Those include two years of free community college, universal prekindergarten, paid family and medical leave, health care premium subsidies, and making the child tax credit permanent.

The crux of Biden’s pitch is that what’s good for families—including a range of more affordable child care, education, and health care options—is good for the economy and America’s future.

Biden also outlined a series of ways to pay for the Families plan, including instituting a minimum 15% tax on corporate profits (some haven’t been paying a cent), closing tax loopholes, and ending tax breaks for fossil fuels, among others.

“We’re going to reimagine what our economy and our future could be,” Biden pledged, “and show the world … democracy can deliver for the people of Illinois and the people of America.”

Biden’s visit gave Rep. Underwood an opportunity to tout Democratic successes on the American Rescue Plan along with what she plans to continue fighting for moving forward.

“The American Rescue Plan saved our economy and it spared us from even worse hardship,” Underwood said in a statement. She stressed that she had spoken with the president about the importance of families getting affordable health care, adding, “I am committed to working with him to pass legislation to lower health care and prescription drug costs.”

Biden’s trip to Crystal Lake came a week after he visited La Crosse, Wisconsin, in the district of veteran Democratic Rep. Ron Kind, who also eked out a tight 2020 win. The earned media from a presidential visit for these vulnerable members is basically priceless. And Biden’s visit is reflective of the fact that both the White House and Democrats believe they have plenty to sell voters, even in conservative areas of the country.

When we invest in families, we invest in our children’s futures, our communities, and the economy. I was so honored to welcome @POTUS to our community to discuss the American Families Plan at McHenry County College. pic.twitter.com/hY8UcuwULs

In our community, the American Jobs Plan and the American Families Plan would help create a brighter economic future for everyone. Read more on the President’s visit below. https://t.co/2oxin8tifB

Rep. Lauren Underwood @RepUnderwood describes what the Black Maternal Health Momnibus Act of 2021 is all about. pic.twitter.com/MYDo1r5qiZ