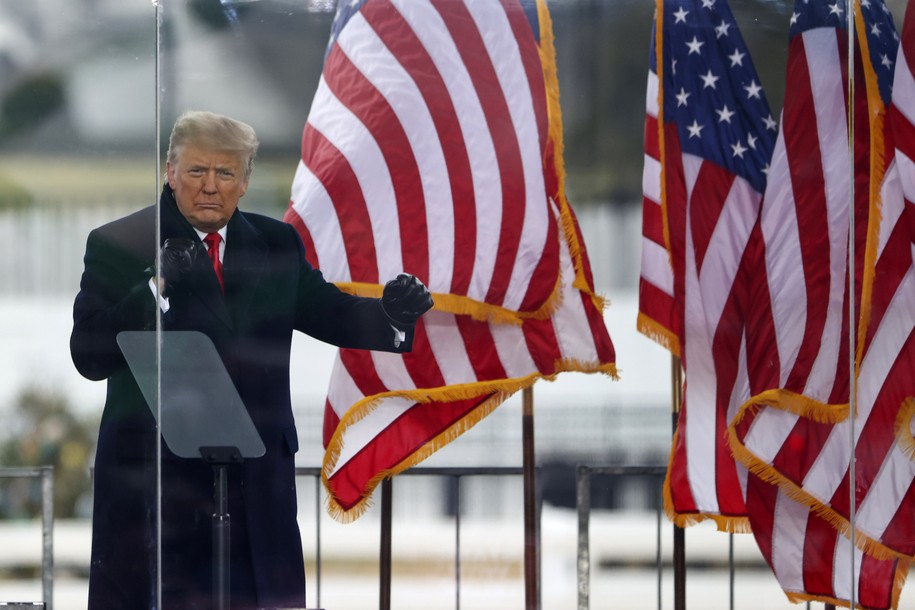 The books documenting Donald Trump’s final days in office are beginning to appear. Please do not buy them. The journalism habit of hiding consequential bits of insider news from the public so that they can be monetized in book form later is a cancer that needs to be gouged out of the industry with a dull knife.

All of the most interesting snippets from each book will be dutifully reported in news stories about the books that should have been news stories, so you won’t miss a thing. And the short version of all of it is that the presidency thoroughly broke Donald J. Trump. It snapped his fragile brain in half like an oversized Rice Krispies Treat. Losing the election untethered him from whatever scraps of reality his advisers had still managed to tie him to, and up he went like a lost balloon with anger management issues. By the end he was (is) wallowing in delusion, ordering staff to do impossible and/or illegal things, absolutely convinced that everything was a conspiracy and that anyone who didn’t tell him what he wanted to hear was in on it.

And nobody around him did a damn thing about it, other than collect up the stories to tell later. We were governed by a madman because his conservative functionaries were all hand-selected for spinelessness and rank incompetence, and it’s a miracle we have, so far, gotten out of it with only a half million U.S. deaths via incompetence and only a failed insurrection attempt mounted by Trump supporters whose only plan was “invade Congress to demand they tear up the electoral results and something something something.”

Fine, so let’s wade through these new book reports to see what new horrors they have brought us. We have already learned that Donald is baffled by and absolutely enraged by his chosen Supreme Court justices’ unwillingness to throw the election on his behalf, with standard Trump mutterings about “Where would [Justice Blackout Drunk] be without me?” because, to malignant narcissist Donald, reality consists solely of Donald Trump doing people favors and people doing Donald Trump favors back.

From a Wall Street Journal reporter’s new book, we learn that Donald Trump flipped entirely the f**k out when someone leaked that he had briefly hidden out in the White House’s underground bunker when Black Lives Matter protesters demonstrated nearby. CNN provides us with the relevant Cliff’s Notes on that one, with Trump “the most upset some aides had ever seen him” and bellowing that whoever had leaked his less-than-an-hour trip to the basement was guilty of treason and “should be executed!”

He remained “obsessed” with finding the traitor for days, which would soon be called having a normal one in the decaying months of Trump’s decompensating narcissistic froth. The most manly man of MAGA manliness was provided security during a protest? How will he ever live down the shame, or whatever.

It’s yet another book, this one by Washington Post reporters, that brings us new tidbits of how Trump reacted to election night itself. Here’s your hot news tip: it broke him. Completely. While Trump had of course repurposed the White House as election night party house because screw tradition, Trump himself quickly lost his tether to our earthly plane when the tide of votes began to turn against him and he began to believe, apparently in all seriousness, that losing states he didn’t want to lose could only mean that his enemies were rigging the election against him. He broke. He had a narcissistic breakdown, and simply decided that there was no possible way America had voted him out of office legitimately—so it didn’t happen. (Qusay Trump also “flipped out” inside the White House, similarly claiming the election was being “stolen,” but one suspects he was only having a tantrum in a bid for daddy’s weird attention.)

At this point, there were roughly 400 party guests, an entire White House staff, and a full contingent of Secret Service agents, but once again none within those groups were willing to do America the patriotic favor of stuffing the delusional ranter Trump in a sack and announcing that because Reasons, Vice President Mike Pence would be taking over for a while.

Instead, Rudy Giuliani goaded Trump on, telling him to “just say we won” the states he wanted to win and damn the actual vote totals. Trump went on television to do just that, launching a nationwide Republican drive to nullify presidential votes in those specific states. It didn’t work, which is why Trump now hates Brett Kavanaugh with a fiery passion, but it still got people killed and continues today with an array of new Republican-pushed state laws designed to keep quite so many working-class people from voting in future elections.

You may have heard of the “great man theory” of history? Forget it. It’s bunk. History is far more commonly bent by complete raging idiots throwing themselves into delusional sulfur-scented netherworlds while their allies all nod their heads and explain to the public that no, this important man is not eating his own underwear in the middle of a public square, he is making some very good points and now the laws of the nation must be quickly rewritten so that underpants are now called baguettes and anyone who says otherwise is a communist. Donald Trump had a delusional meltdown over the election returns and it bent the very history of our nation because his party would rather back a broken man’s delusions than lose power.

You think I’m wrong? Republicans are now actively promoting preventable disease because Trump’s pandemic incompetence forced the party into defending incompetence as a brilliant strategic move. These people are all-in on public underwear consumption, and they intend to turn it into a new national religion.

Let’s see, what else? Oh, Trump also planned to cancel U.S. alliances with NATO and South Korea once the election was over, which is also something his nose-picking party would have gone along with if Trump had been able to cling to power. Just as another aside from the Post book. You know, because Trump has forever been unable to work with purported equals, he can only handle relationships in which he is either polishing somebody’s boots or getting his own boots shined. NATO leaders didn’t properly defer to or attempt to bribe His Royal Highness Burgerguy, and that drove him nuts.

So there you go, there’s some of the most interesting news on how America came extremely really damn close to collapsing entirely, had the election been slightly closer than it turned out to be. It still might collapse, because the not-happily-retired delusional Dear Leader figure still has the weight of the entire Republican Party behind him, but there’s also an equally good chance that even the U.S. Secret Service won’t be able to keep Trump from sticking his hands in a toaster or jumping into the Gulf of Mexico in a hunt for election-stealing dolphins. Anybody’s guess. We’ll only hear about it if somebody’s got a new book to sell.