MSNBC shows just how horribly Trump is gaslighting America, and it’s a thing of pure horror 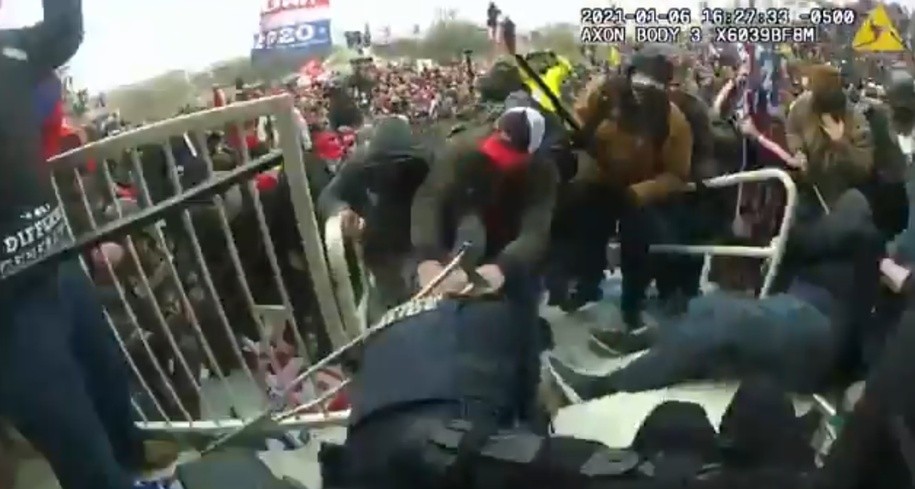 Back in March, Donald Trump went on Fox News to describe the “Stop the Steal” rally on Jan. 6 as “a beautiful thing.” Trump also took the time to claim that there were a million people present—“the largest crowd” he ever had ever spoken to—inflating the actual number by about 3,000%. But really, the focus Trump gave was on saying “these were peaceful people” and “great people.” With oh, so much love. “You have people with no guns,” said Trump, “who walked down, and frankly the doors were open. But there was also a love fest between the police, the Capitol Police, and the people who walked down to the Capitol.”

Last weekend, at a speech to the CPAC gathering in Dallas, Trump repeated most of these lines. “There was such love at that rally,” said Trump. “You had over a million people there,” and Trump  returned to Fox News, to again describe that day as “a lovefest” that was conducted by “peaceful people.”

The difference is that in March, Republicans were still feeling mildly embarrassed about the way that thousands of the people supporting Trump had stormed the Capitol, injured over 100 police, and attempted to hang Mike Pence in order to halt the counting of the electoral vote. There actually seemed to be a few who thought this was a bad thing. But the comments that seemed way, way out there in March drew big cheers from the CPAC audience in July.

Day by day, Republicans are taking a position that is increasingly proud of the attack on democracy that took place on Trump’s watch. They’re viewing violence committed in support of the big lie not as just acceptable, but actually admirable. And Trump’s weekend speech stopped just short of begging for a repeat.

But one 46-second video shows why Trump and every Republican who ever supported him should be deeply, and forever, ashamed.

This one video pairs Trump’s claims about that day with the actual images of what was happening between his supporters and the police who were charged with protecting Congress.

If you only watch 1 thing tonight, please watch this rather chilling video that my producer, the great & powerful Ivy Green made, putting Trump’s lying pro-terror words on Fox over images of the actual violence from January 6th.#mustwatch @MehdiHasanShow pic.twitter.com/JGkI6K1Ox8

Six months after the violent, deadly insurrection that came within a few minutes of accomplishing the goal that those supporters were chanting as they broke through the doors, Republicans have moved on from any sign that they’re the least bit embarrassed about the actions of Trump supporters. House Minority Leader Kevin McCarthy has gone begging for forgiveness, not from the beleaguered police, but from the twice-impeached retiree living at Mar-a-Lago. Republicans who cowered against the wall have claimed they were never frightened because Trump’s supporters were “patriots” who behaved “in an orderly fashion” on what appeared to be a “normal tourist visit.”

The people whose lives were most in danger that day—members of the Capitol Police and D.C. Metro Police—are facing a crisis. As The New York Times makes clear, their ranks are depleted, both because some of those injured on Jan. 6 have been unable to return to work, and because many of those who have had an opportunity to depart have taken it. Many of them say they feel “betrayed.” Many of them are absolutely correct.

Those who were there on Jan. 6 were emotionally and physically drained by the events of that day, and have since been called on to work long amounts of overtime in the wake of an ongoing threat. At the same time, they’re protecting Republicans who claim to support the police, but who are so determined not to acknowledge what happened on Jan. 6 that 21 Republican representatives  actually voted against honoring the officers who put themselves on the line that day.

Just looking at the extremely brief video above, it’s easy to see how many of the police suffered injuries on that day.  Since officers were denied riot gear, including helmets, many of them suffered concussion and brain injuries after being beaten by hands, baseball bats, clubs, and flagpoles. The list of injuries includes cracked ribs, shattered spinal discs, and at least one officer stabbed with a metal fence stake. That’s some real “love” from those Trump supporters.

Let’s see a little more. Seems like these “great people” were really having a “love fest” with this police officer.

New video just obtained by a media coalition, including @CBSNews, shows the moment an officer was grabbed by his head and dragged into the crowd, prosecutors say. That officer was then beaten with an American flag on a pole, according to court documents. H/T @ClareHymes22 pic.twitter.com/NVFEiUKA6F