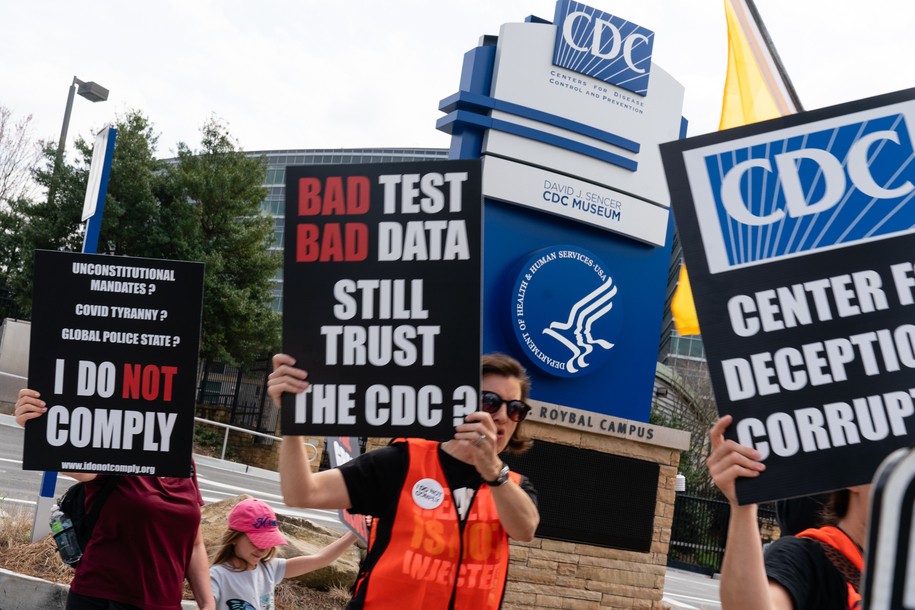 In the best possible world, COVID-19 was handled in the U.S. from the outset with a national system of testing and case management that—as in South Korea—prevented the disease from ever becoming a national epidemic that brought death and long-term disability to all 50 states. In the actual world, at least 400,000 Americans died unnecessarily due to the mismanagement of COVID-19 in the United States alone. And now, thanks to an unreasoning and persistent refusal to get vaccinated by 41% of Republicans, and an influx of evermore-contagious variants, it has become impossible for America to reach the point where COVID-19 does not circulate freely in communities across the nation.

Low-vaccination states are providing the virus with a rotating set of hotspots, boosting the nation to four straight days in which there were more than 20,000 new cases and seeing that the more aggressive delta variant is becoming dominant in all regions. Areas like southwest Missouri have seen a fourth wave of disease that has matched or exceeded levels in January and February, once again straining local health care systems and requiring patients to be shipped to hospitals hundreds of miles away.

For those who are completely vaccinated, it may be tempting to shrug off vaccine-refusing Republicans as being on their own. Except that’s not the way it works. First, no vaccine is 100% effective, and while over 90% of those dying from the disease are currently found among the unvaccinated, the other 10% of people who have been fully vaccinated but are still getting severely ill and dying are being infected almost entirely by people who were unvaccinated. Second, the more people refuse the vaccine, the more sources there will be for the next variant. If delta is not bad enough, the World Health Organization is already tracking variants of interest eta, iota, kappa, and lambda. There are 14 even newer variants that contain features that may make them more contagious, more vaccine evasive, or more virulent. Five of those variants were first identified in the last month.

And right now in Mississippi, there are 12 children too young to take any current vaccine who are in ICUs fighting for their lives. That is entirely because some people still won’t get vaccinated.

To be clear, the delta variant is somewhat vaccine evasive. It spreads 225% more effectively than the variant that was previously the most common in the United States and indications are that it is more likely to cause severe illness, especially to younger people. Depending on the circumstances, the currently authorized vaccines in the U.S. have been from 66% to 84% effective in blocking symptomatic COVID-19 from the delta variant. Studies also indicate that the vaccines are up to 96% effective in preventing infections from becoming severe. These numbers hold up well in real world examples.

Perhaps most importantly, tests have indicated that even when vaccinated people do become infected, their viral load was about half that of those who were infected and unvaccinated. That’s far from a perfect indicator of how likely someone is to pass the disease along, but the decrease in viral load along with reduced symptoms should indicate that vaccinated people are at a much reduced change of spreading disease to others.

The vaccine, vaccination centers, and materials are all available to vaccinate Americans fully. With the exception of the small number of adults and children under the age of 12 who are currently not able to take the vaccines, everyone in the nation could be vaccinated. President Biden really has taken extraordinary measures to ensure that both the vaccine, and vaccination, are as widely available as possible.

On April 8, over 4.4 million doses of vaccine were administered in a single day. Despite the fact that only 56% of the adult population is fully vaccinated, current vaccination rates have fallen to less than one-tenth what they were in the first week of April. Had the vaccination continued at the rate it was in the first week of April, 70% of Americans over 12 would be fully vaccinated, almost 80% would have had at least one dose, and those kids in Mississippi would not be in the ICU.

Right now, the nation could be genuinely getting back to normal. Instead, we’re seeing things like Tennessee’s state vaccine manager getting fired simply for answering—correctly—a question about whether teenagers could seek vaccination without their parent’s permission (answer: they absolutely can). But when pediatrician Dr. Michelle Fiscus posted an honest response to that question, giving the facts as presented by the Tennessee Supreme Court, Republicans in the state legislature howled that she was “trying to undermine parental authority.” The state legislature demanded that representatives of the health department appear to testify, and the result is not just that Dr. Fiscus was fired, but that “a frightened state health department has responded by stopping vaccination outreach efforts.”

This makes no sense.

Because of that action, children will die. Because of the vaccine refusal being driving by Republican politics, being talked up on Fox News, being cheered at CPAC, being pestered into people at every level—children and adults already have died. At this point, almost every COVID-19 death in the United States is an utterly unnecessary death that could have been prevented by vaccines that are safe, effective, free, and readily available.

In the past week, 369 other children in Mississippi tested positive for COVID-19. The blame for their illness does not lie with anyone in China. It doesn’t even lie with Donald Trump. It lies with the adults in their lives who have made the selfish, foolish, and deadly decision to refuse a vaccine they might have easily obtained.

Kinzinger: “My party has been hijacked… And for some people, it’s a fun ride, right? We can put out this outrageous stuff on Twitter. ‘Yes! I’m getting all these retweets and everybody knows me. I’m famous.’ But this plane is going to crash into the ground.” pic.twitter.com/REct6p8FW2