This week on The Brief: J.D. Scholten and John Ray on challenges Democrats face among rural voters 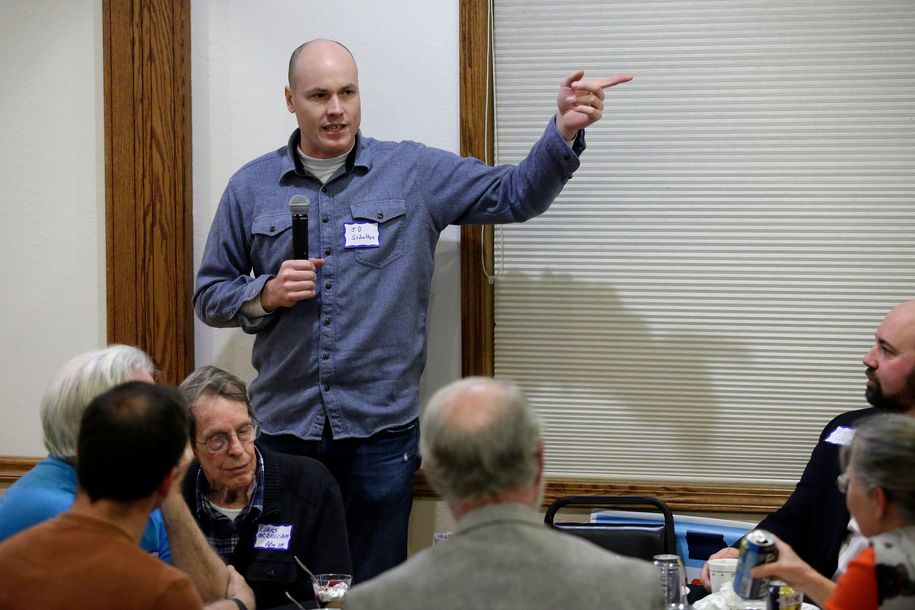 On the latest episode of The Brief, hosts Markos Moulitsas and Kerry Eleveld were joined by guests J.D. Scholten, executive director of Rural Objective PAC and Democratic nominee for Iowa’s 4th congressional district in the 2018 and 2020 elections, and John Ray, director of polling at YouGov Blue.

Moulitsas and Eleveld welcomed Scholten and Ray near the top of the show after noting how Republicans have come to politically dominate rural America in recent decades. Moulitsas noted, “This is a problem because we can have all the gains in the cities and suburbs, but if Republicans run up their margins in rural areas, it makes it harder to win at the state level” and elections at every level of the ballot.

Moulitsas wondered how Scholten managed to run as a Democrat in two difficult elections in a challenging district, and Scholten revealed that he’d asked himself a similar question: “What’s going to get people to vote for a Democrat, who may not have voted for a Democrat in a long time? … This district used to be represented by … extremely progressive Democrats. So I just went back to the basics.”

Scholten went on to discuss what he learned as he campaigned across the rural areas of the district:

What’s happened … is that a lot of these rural spaces have really succumbed to the mis- and dis-information from social media … The shift is happening in a lot of these manufacturing towns, these mid-sized towns … they’re happening a lot, not in the suburbs, but the rural parts of metropolitan counties … Donald Trump really lit something within these folks. What I like to say is, Democrats lost a populist fight to a billionaire in New York. We don’t talk about that enough.

Eleveld went on to ask Ray about the findings of a recent battleground state poll of rural voters his firm conducted with Rural Objective PAC:

Scholten and Ray went on to explain why this is actually a negative indicator. “Rural voters don’t love the Republicans; they just hate Democrats,” said Scholten.

According to Ray, “There’s a clear messaging deficit for Democrats.”

“It’s not so much the message; it’s the messengers,” Scholten clarified.

Ray went on to discuss the polling data in more detail:

What our data is suggesting is that if those are the only voters that we’re thinking about … rural voters are not just hapless victims of Fox News—it’s actively sought out by more conservative viewers … It’s a sort of channel that feeds into the part of you that you want to feed … Yes, there is a lot of conservative media being consumed in these areas, and those outlets have pretty clear, pernicious effects on what those voters believe. Fox News viewers, our data suggests, are really into these sort of conspiracy theories that get passed around [these conservative networks] pretty constantly … But even accounting for that, there’s this other segment of the rural population … who are pretty clearly persuadable.

Moulitsas addressed the benefits of reducing Republican win margins in rural areas, and Scholten made the point directly: “Losing less doesn’t sound sexy, but it is exactly what we need to do to win in Iowa. You look at Wisconsin, Pennsylvania … Georgia … We need to lose less in certain areas to win statewide.”

The foursome went on to discuss bridging gaps in voter turnout among rural demographics more broadly. “If we’re going to talk about the long-term game, in the midwest, we really need to start targeting the Latinx community,” Scholten emphasized. “It’s the kids — and we’re starting to see in the midwest really strong activists in the next generation. But we, as a party, need to capitalize on that momentum right now.”

Ray pointed out that, “On economic issues, Democrats win those voters very strongly … on the other hand, those same voters, if you flip over to what you might call ‘social issues’ or ‘culture war issues,’ Republicans win those voters pretty clearly.”

If you look at how Trump performed versus lower-level Republicans, Trump actually underperformed local politicians … there’s a reason that the culture war is the only part of the Republican policy portfolio right now … So much [extremism] has come from that party in just the past eighteen months that I think they’re going to start hitting a wall of persuasion … the important takeaway that we saw in the survey results is that that kind of focus is going to be really important for Democrats, who need to have messaging discipline on real policies that benefit people’s lives.

The group went on to discuss the role misinformation and disinformation play in damaging the Democratic brand. “More folks in my district get their news from Facebook than they probably do from nightly news,” said Scholten. “You look on Facebook, and what are the top 10 things every day? … It’s right-wing propaganda. That’s where we need to be. The content gap is just a massive gap we’re not overcoming. Just add in a candidate with no infrastructure … We need stronger party infrastructure.”

Scholten suggested developing a national network so that they’re able to combat misinformation with local responses. “This is what’s missing in the party … That’s where I feel that we really need to step up.”

Regarding Democrats’ ongoing struggles with messaging, Ray pointed out that rural voters respond well to patriotic messages, such as competing economically with China. Yet, when Democrats embrace these policies, the move is interpreted cynically by rural voters, who believe Democrats only take these stances in a self-serving manner. Yet, Ray was careful to note that this cynicism extends to Republicans as well. Rural votes must be earned.

Lastly, Moulitsas brought up the difficulty of winning over the Trump voter, most of whom he characterized as “destructive” and “nihilists.”

According to Scholten, “The polling shows that people think it’s time to move on [from Chuck Grassley]. There’s a huge opportunity for Iowa Democrats right now, but we can’t continue to lose this populist battle … There’s tremendous opportunity to create a movement in Iowa, but we have to make sure the energy, and getting out the vote—we have to run a near-perfect game to pull it off. It’s not impossible, but a lot of things have to go our way.”

The Brief is also streaming on the following platforms: