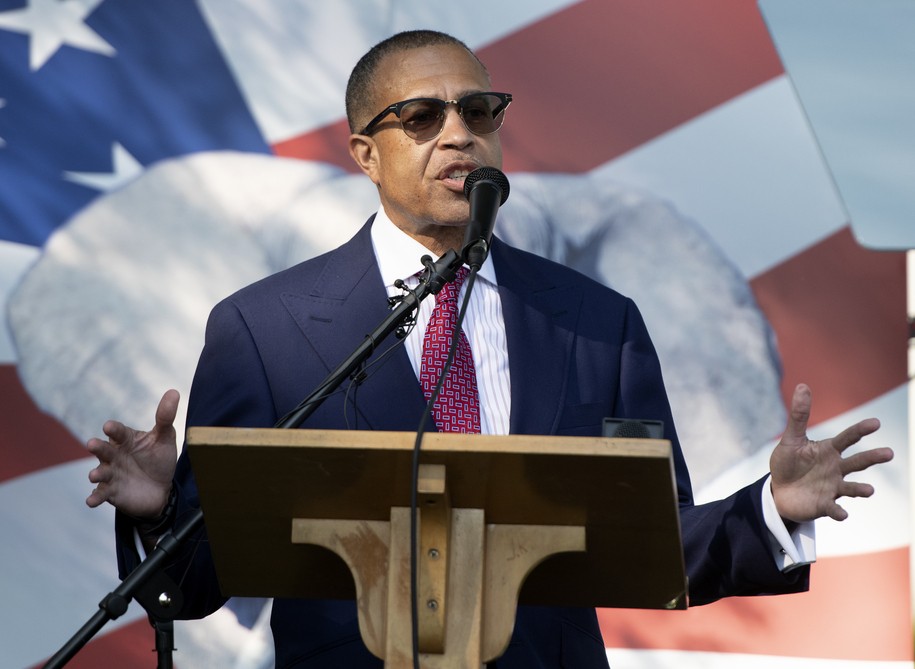 ● MI-Gov: Former Detroit Police Chief James Craig, a Republican who’s been talking about challenging Democratic incumbent Gretchen Whitmer, announced Wednesday that he was forming an exploratory committee―an entity that doesn’t actually exist under Michigan law. As the Detroit Free Press‘ Paul Egan notes, the state “does not distinguish between committees formed by candidates who have declared they are running and those who are still exploring the idea.”

Craig added that his official candidacy kickoff “will likely occur after Labor Day when voters begin paying closer attention to the 2022 elections,” so his exploration seems to be just his way to raise money now while still being able to save his announcement for a time of his choosing. Indeed, Chad Livengood of Crain’s Detroit noted that Craig’s official entrance into the race would likely come closer to the high-profile Mackinac Republican Leadership Conference at the end of September.

A few other Republicans are running against Whitmer, but none of them have the stature of Craig, who recently stepped down as Detroit’s police chief and would be the Wolverine State’s first Black governor. Some GOP powerbrokers, though, appear to be casting about for an alternative to the first-time candidate: Kyle Melinn at MIRS News wrote last week that speculation about a potential campaign by Betsy DeVos, Donald Trump’s notorious education secretary, “tends to add some gravitas to the story line that … Craig is not the unanimous choice among all major Republican players.” (DeVos has yet to say anything publicly about taking part in this race.)

The eventual GOP nominee will be in for an expensive contest against Whitmer in this swing state: The governor announced this week that she’d hauled in $8.5 million from Jan. 1 through July 20—an off-year record—and had $10 million on-hand.

● WI-Sen: Milwaukee Alderwoman Chantia Lewis joined the Democratic primary for Senate on Wednesday, just a day after one of the most prominent candidates to date, Lt. Gov. Mandela Barnes, entered the race. Like Barnes, Lewis is hoping to become Wisconsin’s first Black senator. At least half a dozen notable contenders are seeking the Democratic nomination, while Republican Sen. Ron Johnson has yet to confirm whether he’ll seek reelection.

● NV-Gov: Any notion that Rep. Mark Amodei might not run against Clark County Sheriff Joe Lombardo in next year’s Republican primary for governor seems quite dead: In new remarks, the congressman says, “Certainly no one has sucked the air out of the room, in a Republican primary sense, which Steve Sisolak must be happy about,” referring both to Lombardo—who announced a campaign in May—and the Democrat currently making his home in Nevada’s governor’s mansion.

Earlier this year, the Las Vegas Review-Journal‘s Rory Appleton reported that unnamed Republican operatives believed Lombardo and Amodei would “come to an agreement” to avoid fighting one another for the GOP nod, and it’s certainly possible Amodei won’t wind up running (he now says he’s “committed to making a call in October”).

For what it’s worth, Amodei raised only $89,000 in the second quarter of the year, and under Nevada law, he’s allowed to transfer federal funds to a state campaign, so he’s not sending a strong signal that he’s actually interested. But if he does wind up staying out, it doesn’t look as though intra-Republican comity will be the reason why.

● RI-Gov: Fundraising reports for the second quarter of the year aren’t due until Aug. 2 in Rhode Island, but all of the notable Democratic candidates for governor—both actual and potential—have already shared estimates of their hauls:

Elorza and Magaziner still have yet to announce their campaigns, though given the sums their raising, there’s little doubt they will. Elorza indicated in the middle of June that he wouldn’t decide for another three to five months, while Magaziner said in mid-May that he would decide “shortly.” (It’s fair to say we are well past any reasonable definition of “shortly” at this point.)

● CO-03: Democratic state Rep. Dylan Roberts had been considering a bid against Republican Rep. Lauren Boebert for Colorado’s 3rd Congressional District but instead announced this week that he’d run for the state Senate seat held by fellow Democrat Kerry Donovan—who is term-limited and is already running for Boebert’s seat herself.

● NY-21: Former speedskater Bridie Farrell, who was a member of the U.S. national team, announced on Wednesday that she would join the field of Democrats hoping to take on Republican Rep. Elise Stefanik next year. The area is known as a major hub for speedskating, and the village of Lake Placid in the northern part of New York’s 21st Congressional District hosted the Winter Olympics in both 1980 and 1932.

Toward the end of her athletic career, Farrell became an advocate for sexual assault victims after accusing Olympic speedskating medalist Andy Gabel of abusing her beginning when he was 33 and she was 15. After Farrell went public in 2013, Gabel admitted he’d had an “inappropriate relationship with a female teammate”; he’s now being sued by Farrell thanks to a 2019 law she helped champion that relaxed New York’s strict statute of limitations barring child sex abuse claims.

● TX-10: Manor Mayor Larry Wallace has announced a challenge to Republican Rep. Mike McCaul, making him the first notable Democrat to join the race for Texas’ 10th Congressional District. Manor is a small but very fast growing suburb in the Austin area, though it may or may not remain within the confines of the badly gerrymandered 10th District after Republicans pass new maps. Under the current lines, Donald Trump carried the district by a small 50-48 margin in 2020, though McCaul won reelection by a wider 52-45 spread.

● OH-15: Protect Freedom PAC, an outfit run by allies of Kentucky Sen. Rand Paul, has thrown down another $245,000 worth of ads on behalf of former state Rep. Ron Hood ahead of the Aug. 3 Republican primary for the special election in Ohio’s 15th Congressional District. That brings the group’s total outlay to $626,000, making it by far the biggest spender in the race. The Club for Growth is the runnerup, putting about $150,000 into mailers attacking a trio of candidates: state Sens. Bob Peterson and Stephanie Kunze, and state Rep. Jeff LaRe.

● WY-AL: It’s more “Bachelor” than “The Apprentice”: Donald Trump says he’ll be interviewing some of the Republican candidates challenging Rep. Liz Cheney at his New Jersey golf club next week and will, in the coming months, give his rose to “JUST ONE CANDIDATE” to help prevent a split field. So far, though, none of the major contenders has confirmed whether they’ll be heading to Bedminster, though state Rep. Chuck Gray just launched his first TV ad, with the refrain, “Let’s thank President Trump—not impeach him.”

Cheney, however, dominated the entire field arrayed against her—combined: She pulled in almost $1.9 million and had $2.8 million in her war chest.

● Boston, MA Mayor: Better Boston, a PAC formed to aid City Councilor Andrea Campbell in September’s nonpartisan primary, is airing a TV commercial that describes how the candidate experienced a tough childhood and went to Princeton before returning to Boston to serve the community. The narrator continues, “Andrea Campbell beat the insiders to serve on the City Council, became the first Black woman council president in Boston history.” There is no word on the size of the buy.