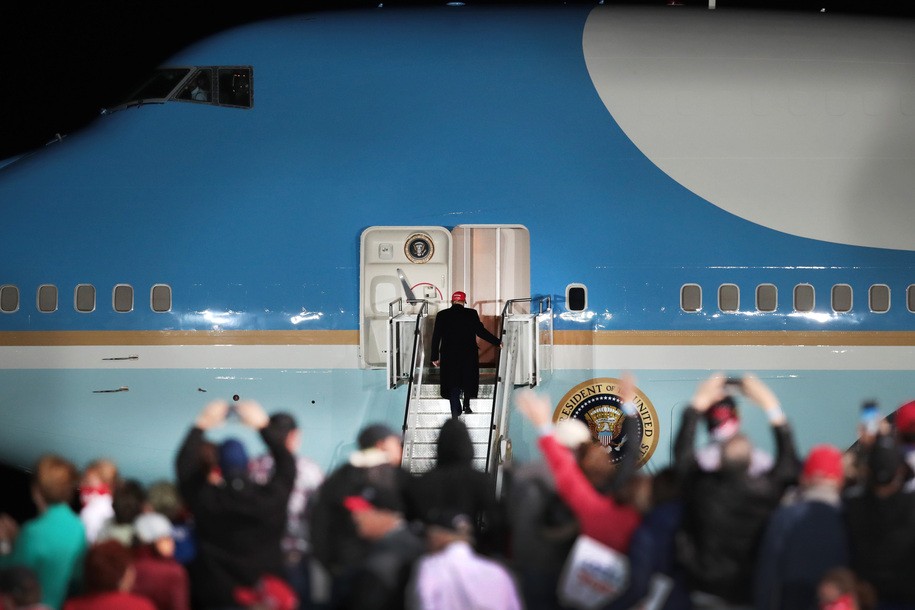 ● Pres-by-LD: Daily Kos Elections is out with the 2020 presidential results for every state Senate and state House district in Iowa, where Donald Trump’s broad victory helped his party maintain its iron grip on the legislature. You can find all of our district-level data nationwide at this bookmarkable permalink.

This longtime swing state lurched hard to Donald Trump in 2016 after backing Barack Obama twice, but Democrats hoped that a shift back to the left would help them claim their first state House majority since 2010, which would have required a pickup of four seats. Instead, though, Trump beat Joe Biden in Iowa by a wide 53-45 margin, and Republicans secured a 59-41 majority in the lower chamber after netting six seats.

As bad as 2020 went for Team Blue, though, crossover voting actually worked in their favor in Iowa in a year when it mostly benefited downballot Republicans nationally. Five of the 63 Trump seats in the 100-member House, where members are up every two years, are held by Democrats, while just one of the 37 Biden districts is represented by a Republican.

The reddest Democratic-controlled turf is HD-52 in the northeast corner of the state, where incumbent Todd Prichard won his fifth term 54-46 even as Trump was romping 62-37; Prichard, who ran an abortive campaign for governor in 2018, was serving as minority leader at the time, though he stepped down from that post last month.

It’s almost impossible to believe now, but Obama carried Prichard’s constituency 56-43 in 2012 as he was winning 52-46 statewide. The area has utterly transformed politically since then, though: Trump prevailed 57-38 in 2016, while Republican Gov. Kim Reynolds won 55-42 in 2018 amidst a close statewide race against Democrat Fred Hubbell. But Prichard’s seat is far from an anomaly, as a full 28 of the 61 Obama districts backed Trump last year. Unsurprisingly, the other four Democrats in Trump seats also represent areas that had gone for Obama in the past.

The one Biden Republican, by contrast, is Eddie Andrews in the Des Moines area. Andrews unseated a Democratic incumbent 51-49 even as Biden was winning his HD-39 51-47, a victory that made Andrews the second-ever Black Republican to serve in the chamber. (The first was Cecil Reed, who was elected to a lone term in 1966.)

Andrews’ victory came even though his district’s political trajectory has been the direct opposite of Prichard’s. Mitt Romney prevailed 56-43 here in 2012, but Trump won it by a much smaller 49-44; the seat then favored Reynolds only 50-48 before Biden took it last year. All of this makes Andrews’ district one of just four Romney-Biden House seats in a state that has overwhelmingly moved in the other direction.

We’ll turn to the Senate, where half the members are up in presidential years while the rest are on the ballot in midterm cycles. Democrats managed to hold on to the upper chamber during the 2010 and 2014 GOP waves, but they finally lost power during the 2016 Trump sweep. Republicans ended the 2020 cycle with the same hefty 32-18 majority they came in with, and it would almost certainly take two solid election cycles in a row for Democrats to have a chance at retaking control anytime soon.

Trump won 32 seats to Biden’s 18, with two senators in each party representing crossover turf. The only member of this quartet who was up in 2020 was Republican state Sen. Brad Zaun, whose SD-20 includes all of Andrews’ constituency. (In Iowa, two House districts are nested within each Senate district.) Zaun had failed to unseat the late Democratic Rep. Leonard Boswell in a competitive race in 2010, but he demonstrated considerably more electoral success last year when he won a fifth term 51-49 as Biden was prevailing 53-45.

Their two Democratic counterparts are Amanda Ragan and Jackie Smith, who were also last on the ballot in 2018. Ragan held on 51-49 in SD-27, another northeastern Iowa constituency that went for Reynolds 55-43 and later supported Trump by a slightly larger 56-42 spread. Smith, meanwhile, unseated a GOP senator in another 51-49 race in a seat based around Sioux City in northwest Iowa; SD-07 supported Reynolds by a tiny 48.9-48.8 margin, while Trump won it 50-49 in 2020.

The GOP’s 2020 wins will likely have long-term consequences even if Iowa becomes competitive again in the near future. Under state law, a nonpartisan agency proposes maps to the state legislature, and lawmakers have always adopted them. In previous decades, control over Iowa’s state government has been divided between the parties, but for the first time, Republicans are completely in charge. As a result, they have the option to simply reject the agency’s proposals or repeal it altogether, which would allow them to implement their own gerrymanders.

● GA-Sen: The Associated Press reported Friday that Cindy Grossman, the ex-wife of former NFL football star Herschel Walker, secured a restraining order against him in 2005 for allegedly threatening to kill her and her boyfriend. Donald Trump has spent months trying to recruit Walker to challenge Democratic Sen. Raphael Warnock, though Walker has yet to reveal his plans.

Grossman had filed for divorce in 2001 for what she called “physically abusive and extremely threatening behavior” from Walker. She went on to seek a protection order from a judge four years later in Texas, where they both lived, which included an affidavit from her sister, Maria Tsettos, detailing Walker’s alleged threats. Tsettos wrote that the former football player had called her and “stated unequivocally that he was going to shoot my sister Cindy and her boyfriend in the head.” She added that Walker informed her a short time later that he’d purchased a firearm and planned to carry out his threat.

Grosman told the court that Walker had confronted her later that day, saying he “slowly drove by in his vehicle, pointed his finger at (her) and traced (her) with his finger as he drove.” Records obtained by the AP say that the police spoke with Walker, who denied threatening his former wife. The AP story says that Tsettos’ account “was concerning enough to police that they took for ‘safe keeping’ a gun Walker had on the floor of his car.” A judge went on to both issue the protective order Grossman sought and temporarily forbade Walker from possessing any guns.

Walker previously wrote about his struggle with mental illness in a 2008 book, which included a 2001 story describing how he’d furiously hunted for a man who was late delivering a car. “The logical side of me knew that what I was thinking of doing to this man—murdering him for messing up my schedule—wasn’t a viable alternative,” wrote Walker, “But another side of me was so angry that all I could think was how satisfying it would feel to step out of the car, pull out the gun, slip off the safety, and squeeze the trigger.” Walker said that he ended his search after seeing a bumper sticker reading, “SMILE. JESUS LOVES YOU” and soon found professional help.

After the publication of Walker’s book, Grossman told ABC News that on one occasion, Walker put a gun to her head and said, “I’m going to blow your f-ing brains out.”

● FL-Gov: Rep. Al Lawson didn’t quiiite rule out a bid for governor back in February, but now he’s endorsed fellow Democratic Rep. Charlie Crist for the job, so we can dial him out of this one.

● MD-Gov: Former RNC chair Michael Steele and 2020 Biden supporter announced Thursday that he was forming an exploratory committee for a possible campaign for the GOP nod, but his team isn’t entirely closing the door on the idea that Steele could run as an independent instead. When the Washington Post asked strategist Jim Dornan about this speculation, he replied, “[T]hat is not our intention at this time.” Dornan, though, still insisted that Steele, who previously served as lieutenant governor and as Team Red’s 2006 Senate nominee, is still a “strong conservative” and a Republican.

● NE-Gov: Former Republican Gov. Dave Heineman, who confirmed last month that he’s looking at a comeback bid, now says he’ll “take most of the rest of the summer and the fall” to decide whether he wants to seek his old job.

● OH-11: A new poll from the group Democratic Majority for Israel, which has been spending heavily on behalf of Cuyahoga County Councilwoman Shontel Brown, now finds her trailing former state Sen. Nina Turner by a 41-36 margin. A memo from pollster Mark Mellman (who also chairs DMFI) also includes previously unreleased trendlines that show Brown making up much of a considerable gap that stood at 50-26 last month.

With the Aug. 3 special election primary just over a week away, though, there’s not much time left for Brown to catch up the rest of the way—if indeed DMFI’s polling is accurate in the first place. (Brown’s internal polls, for what it’s worth, have shown a similar trajectory, while Turner hasn’t released any survey data since May.) Mellman also acknowledges that “putting Shontel Brown over the top will require substantial resources and a sustained communications effort through Election Day,” another area where she’s lagged.

Brown just reported bringing in a considerable $1.4 million between April 1 and July 14, but Turner raised far more—$2.3 million—during the same timeframe. (The normal quarterly reporting period was extended because of how close the usual deadline would have been to the special election, to avoid requiring candidates to file multiple reports.)

Turner also outspent Brown, $2.8 million to $1.6 million, and had a $645,000 to $355,000 advantage in cash-on-hand for the stretch run. DMFI has partly made up that gap, spending $941,000 so far on ads both boosting Brown and attacking Turner, while a trio of groups (including the Congressional Progressive Caucus and the Working Families Party) has put in $516,000 in support of Turner.

● OH-15: Campaign fundraising reports are in for the Aug. 3 GOP primary covering the period from April 1 to July 14, and we have the totals for each notable candidate below:

Donald Trump is backing Carey, the candidate who raised the most money from donors, but some other contenders have also earned some high-profile support. Most notably, Steve Stivers, whose resignation from the House set off this special election, has backed LaRe, and the former congressman’s campaign committee has also aired ads on his behalf.

In addition, Protect Freedom PAC, which is run by allies of Kentucky Sen. Rand Paul, has deployed about $640,000 to aid Hood, while the Club for Growth has spent about $150,000 on mailers going after Kunze, LaRe, and Peterson. Peterson, meanwhile, has the backing of the prominent anti-abortion group Ohio Right to Life, though it doesn’t appear to have spent anything to help him yet.

Unsurprisingly, things are far quieter on the Democratic side in this conservative seat. State Rep. Allison Russo raised $275,000 and had $195,000 on-hand in mid-July, while Army veteran Greg Betts hauled in less than $10,000.

● TX-06: The anti-tax Club For Growth’s newest spot for Tuesday’s all-GOP special argues that state Rep. Jake Ellzey has missed numerous votes in the legislature during his seven months in office because he’s “so busy trying to get to Congress.” The narrator continues, “When Ellzey did show up, he broke his word and voted for a tax hike.”

Welch, a former member of the Pinellas Board of County Commissioners, takes 23%, while Blackmon edges Democrat Darden Rice, a fellow member of the City Council, 22-17. Another Democrat, former state Rep. Wengay Newton, lags well behind with 8%. St. Pete Polls gave Welch a similar 20% of the vote one month ago, but the firm found a very different battle for second place back then: The June survey showed Newton in second with 13%, with Blackmon and Rice at 12% each.